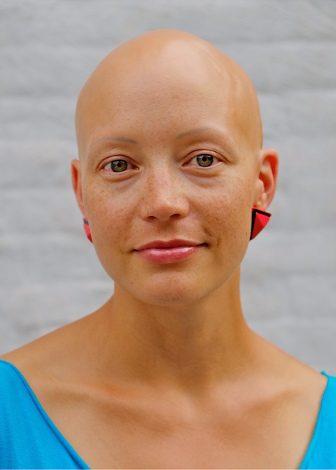 “One of my earliest ways of describing the book to myself as I was writing it was a poetic thriller, or an existential thriller,” says Phillips, an assistant professor of creative writing at Brooklyn College. She is a recipient of the Rona Jaffe Foundation Writers’ Award and the Italo Calvino Prize, and her short stories have been published in Tin House, Electric Literature, Slice, BOMB, Mississippi Review, PEN America and the collection And Yet They Were Happy.

In The Beautiful Bureaucrat, a young woman lives with her husband in a big city. They don’t yet have money or friends. To help address the former, she interviews for a clerical job at a huge windowless building. The building is branded with two transposable letters, “A” and “Z.” The interviewer is equally undistinguished.

“The illusion of facelessness was, of course, almost immediately explicable: The interviewer’s skin bore the same grayish tint as the wall behind, the eyes were obscured by a pair of highly reflective glasses, the fluorescence flattened the features assembled above the genderless gray suit,” Phillips writes. “Still, the impression lingered.”

Josephine Jones takes the job, entering a seemingly endless stream of specific codes into a database. She is barred from accessing other areas of the database and encounters hardly any coworkers. It’s mysterious, but it’s a living—enabling her and husband Joseph to stay in a string of subpar sublets and take occasional meals at the 24-hour Four-Star Diner. (“In lighter moments, they’d speculated about why the Four-Star hadn’t gone ahead and given itself the fifth star,” she writes.) But when Joseph begins disappearing for hours and days at a time—without satisfactorily explaining his absences—Josephine begins to question the unknowns.

Phillips is a fan of Cohen brothers’ films. “Something they do is take on big questions about identity and the meaning of life and our purpose on earth, often in the context of something that borrows genre elements from a western or from a thriller or spy or detective story,” she says. “So I was interested in how I might use certain thriller elements in the interest of asking larger questions about existence and exploring language.”

Phillips wrote The Beautiful Bureaucrat over the course of seven eventful years: Her older sister died eight weeks after Phillips gave birth to her daughter. Her son was born as the couple closed on their first apartment, which was also around the time Phillips won the Rona Jaffe Award. And before the Beautiful Bureaucrat manuscript sold to Henry Holt, the ups and downs of the publishing process nearly caused her to abandon it.

“A lot of positives and negatives were happening all at the same time—it often felt like it was birth and death in the same breath,” she says. “So I was trying to capture the proximity of those events [in the book], and how the universe will just throw them all at you. That sounds more deliberate than it is—the universe doesn’t intentionally throw it at you, it’s just the plodding onward of this organic machine—but maybe that’s why it was so hard to write the book and why it took me so long. It still feels like I don’t completely have a handle on all of those things, but that’s what I was aiming for.”

Trying to get a handle on life’s strangeness leads Josephine back to the Four-Star Diner, where their regular waitress, Hillary, reads her palm, pronouncing Josephine “self-critical,” “introverted,” “wary” and “reserved.”

Josephine felt naked, ashamed, far too understood. She swiped the napkin across her face and stared at the unfair red hair. Was Hillary kind or cruel?

‘I’m just the messenger, sugarplum,’ Hillary said. ‘Are you ready for the good news?’

Josephine spread her hand out on the countertop again, but Hillary ignored it.

‘Though you have some personality weaknesses, you’re generally able to compensate for them,’ she announced.

Josephine must overcome timidity to unravel dual mysteries: where does her husband go and what does he do there? What is the true nature of her work in the building labeled “A” and “Z”?

“The institution [where Josephine works] is one way of trying to capture that sense of a machine that just plods onward and onward and onward, regardless of our desires or needs, and brings us both good and bad in equal measure—or not in equal measure, because no one’s measuring,” Phillips says. “I suppose I’m trying to describe how I think the universe functions. But that’s all,” she laughs—as in, no big deal.