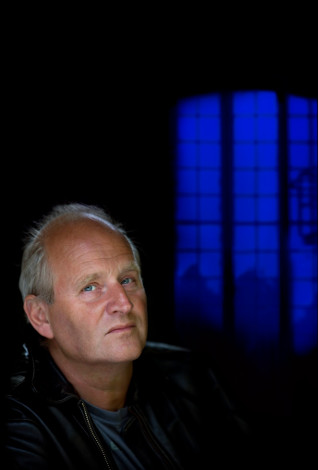 With Summer House with Swimming Pool, Herman Koch faced a daunting yet enviable task. His previous novel, The Dinner, was a runaway best-seller across the globe, eliciting the sort of glowing reviews and lively cocktail conversations that most writers can only dream of. Even though Koch had already published five novels in his native Netherlands, The Dinner established his literary reputation on an international level. In the end, it became the most translated novel in Dutch history. How, then, could he possibly follow up this wildly successful novel?

Fans of The Dinner will be pleased to discover that Summer House with Swimming Pool shares many common themes and characteristics. Both explore the unspoken prejudices and violent urges that bubble just below the calm surface of the enlightened international elite. In addition, both are told by unreliable narrators whose compelling voices compensate for their somewhat unlikeable personalities. Koch credits his extensive background as an actor, both on Dutch radio and television, for helping him craft the right voices for his flawed narrators. “When you invent characters as an actor,” Koch says, “the main thing you have to figure out is the right kind of voice. The same goes for writing. In my experience, if you find the right voices for your characters, you’ve already done about 80 percent of the work in the book.”

The voice that Koch developed for Marc Schlosser, the narrator of Summer House with Swimming Pool, perfectly fits his personality: world-weary, opinionated, and aloof. A family practitioner whose practice caters to those in creative professions, Marc has lost his passion for work. He’s developed an aversion to the various medical tasks he routinely performs. “I envision Marc as someone who’s been in the profession for a long time,” Koch states. “He’s become jaded by the profession and his clients. He’s grown to dislike their bodies. There’s a sense that he’s not doing anything serious in his life.”

Cynical and reserved, Marc is quick to judge those around him, and not self-aware enough to recognize his own prejudices. In this way, he’s a prototypical unreliable narrator, just as Koch intended. “My real goal,” Koch tells me, “is that we as a reader might know more about the narrator than he does about himself. He might be intelligent, as Marc certainly is, but he’s too secure in his own beliefs and convinced that he’s doing the right thing.”

Appropriately, Summer House with Swimming Pool hinges on a terrible act that Marc potentially misinterprets. One of his patients, Ralph Meier, a renowned actor and unabashed womanizer, invites Marc and his family to a posh beach house for the summer. Shortly thereafter, Marc’s oldest daughter is found unconscious on the beach, the apparent victim of a sexual assault, even though when she reawakens she claims to have no memory of what occurred. Marc convinces himself that Ralph committed the crime and becomes consumed with the idea of revenge. When Ralph shows up at his practice in failing health afterward, Marc purposefully misdiagnoses the condition, putting his practice and Ralph’s life in jeopardy.

More than anything, with his last two novels Koch has proven himself adept at creating complicated antiheroes—deeply flawed, somewhat unlikeable protagonists who remain compelling despite their ethically questionable decisions. When asked why he’s drawn to such individuals, Koch replies: “I was thinking a lot about characters in TV series like Tony Soprano and Don Draper who are not sympathetic in many ways and often do horrible acts, but at the same time viewers come to feel for them in certain ways, to understand the world through their eyes. That’s what I was striving for in a sense with my last two novels.”

Even though Marc exhibits certain sociopathic characteristics, Koch keeps readers invested in him by grounding his dubious actions in a plausible parental instinct to avenge his daughter’s honor. Ultimately, Summer House with Swimming Pool forces us to consider an uncomfortable, vexing question: How would we, as parents, have reacted if the same thing had supposedly happened to our daughter?

Luke Epplin’s work has appeared in The Atlantic, the New Yorker’s Page-Turner, and The Paris Review Daily, among others. Follow him on Twitter.