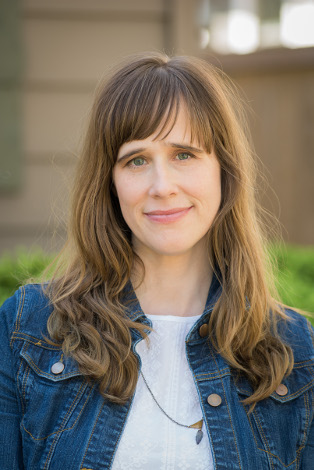 Holly Goddard Jones had written 100 pages of a horror story about killer ticks when she found out she was pregnant. Through her son’s first years and a second pregnancy, she wrote and rewrote The Salt Line, finishing final edits just one month before her daughter was born.

“Once I was dealing with motherhood and all the anxiety around it,” says Jones, who lives with her family in Greensboro, North Carolina, and teaches creative writing at UNC-Greensboro, “I found myself revisiting the themes and situation of the book through that lens. It became clear to me, in lots of ways, that it’s about being a parent and being a [child], and I became interested in how the different characters lived within those roles.”

Under the influence, The Salt Line evolved into a propulsive literary fiction that challenges motherhood, media, class, and commerce.

The novel begins with a motley group of American adventurers who pay a premium to journey beyond the wall that surrounds the safe, sanitized Atlantic Zone (think: space tourism). They seek natural wonders (e.g. forests, mountains, sunset vistas) that have been inaccessible for generations, because they’re infested by a species of supertick whose bite, left unattended, can result in unseemly death.

As their Outer Limits Excursions tour guide, Andy, extols: “I’ve risked my life and defaced my body because I believe those sights have value,” Jones writes, “and that connecting with nature—however dangerous it can be—is essential to the experience of being human.”

The known antidote to tick bite is the Stamp, a weapon that painfully extracts the offending creature. It’s not for everyone, Andy acknowledges: “If you’re ready for an adventure, though—if you want to know, for the first time, what it really means to be alive—stay,” she writes. “He held up the Stamp, wagged it a little. ‘There is no pleasure without pain.’ ”

Three excursionists anchor what is, essentially, an ensemble novel: Edie, the beautiful, inquisitive girlfriend of an immature pop singer; Wes, a young captain of digital industry, à la Mark Zuckerberg; and Marta, the wife of a notorious businessman with political ambitions.

“When I started the story,” Jones says, “I thought, ‘These characters are going to go into the woods, people will start getting bitten, things are going to start going wrong’—like a horror movie. But as the plotting became more elaborate, I began to wonder, ‘What if the danger they encounter beyond the wall is something other than what they expected?’ ”

What lurks between zones is more surprising—at times, more horrifying—than Edie, Wes, and Marta could have ever imagined. Under threat of disease, death, and grievous bodily harm, they grapple with alliances and rivalries, pragmatism and idealism, fear and resolve.

“What would her boys think if they could see her now?” Jones writes of Marta. “Would they be scared for her? Proud of her? They’d not yet grown into the men she’d hoped they’d be....If Marta could make it through this experience...she could finish the work of raising her boys to be decent men.”

Of the three main characters, Marta is the only mother, and her will to survive is indisputably steeled by her sons.

“[My children] have ultimately made me a better citizen of the world,” Jones says. “They’ve made me more conscious of how I live and what I want their future to be like...I am willing to act in ways I never was before, to do whatever it takes, to make sure they’re okay.”