‘The Illicit Happiness of Other People’: Exploring the Postmodern Depths of Joy 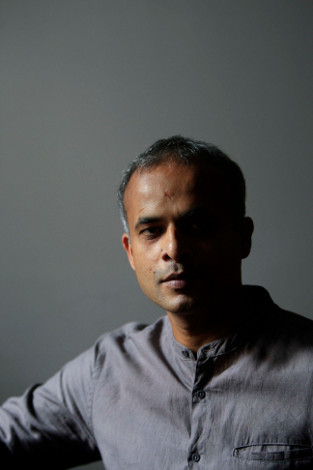 Manu Joseph’s new novel The Illicit Happiness of Other People centers around a group of adolescent boys living in the 1980s in Madras asking one another dangerous, if standard, philosophical questions: Is this reality the only reality? Is happiness nothing more than a shared delusion? Do we pursue happiness or does it pursue us?

This part of the novel, Joseph says, is only fiction “in the legal sense.” “When I was an adolescent and growing up in Madras, I was part of a group which got sucked into philosophy in the sense that we were always very sure that something was going on,” Joseph says. “And this was before The Matrix.”

Worried that life as we know it may be nothing more than “some kind of bad movie,” Joseph and his friends questioned everything. Years later, he says, he still isn’t certain of the answer.

Happiness is about the search for those answers, but it is also about its characters—Ousep Chacko is a drunk, a journalist, and father to Unni, who has committed suicide three years before the novel begins. At the start of the story, Ousep receives a clue that starts him on a search to find out why his son died. Mariamma Chacko, his wife, wags her finger and speaks to the wall in small bouts of insanity. And Thoma Chacko, Unni’s insecure younger brother, just tries to get through his life avoiding shame.

The novel is an admirable blend of plot and ideas, of a story that reads like a mystery but also of the kind of philosophical and social observations that are worth pausing for and underlining. On alcoholics: “That is the quality of drunkards, they have a lot of friends. Because what men find most endearing in other men are their tragic flaws.” Or the hypothesis that happiness is “an inescapable fate, not a pursuit.” It is on the one hand a serious book, but also a book that uses black humor to deconstruct and satirize even its own assumptions.

It is, in addition, a book which adheres to and delights in traditional story-telling structure. “I’m a bit of a beginning, middle, and end kind of a guy when it comes to a story,” Joseph says. “In my early 20s I hated the modern American short story because I just didn’t get it. I was like, ‘Okay, where’s the story?’”

But while Joseph embraces traditional plot structure, neither does he shun the unconventional.  Whole pages of the book are dedicated to explaining the elaborate stories of Unni’s lost cartoons. One such cartoon which finds a way into the novel is actually the first short story Joseph ever wrote. It, like the novel, ends with a twist. “I was 11 and at that time I used to write all my short stories as a poem, with rhyming words, so if the story flops, at least it would rhyme,” Joseph says.

Joseph says literary fiction can only benefit from the inclusion of other forms or influences, including but not limited to cartoons. He admired Egan’s PowerPoint chapter in A Visit from the Goon Squad. And he’s a self-described cinema fan.

He also thinks novelists can benefit from the linear plot structure of most films. “Plot saves you in many ways,” Joseph says. “It is a concrete thing; there is a reason why it exists.”

For those of a more postmodern persuasion, rest assured: any lack of ambiguity or complexity in the plot of Happiness is more than made up for by its knotty philosophical content. Morality is not straightforward in the novel; nor is happiness. As the story unfolds, possible psychiatric explanations are put forth for some of Unni’s more fantastic philosophical ideas—but Joseph remains a student more than a teacher, never revealing whether all of this philosophy could be dismissed with science, or vice versa.

For a book with happiness in its title, it certainly juggles some hefty drama. The story, after all, is that of a mourning father trying to understand his son’s suicide. But Joseph says that he is less interested in the dull and dreary, both in life and in literature.

“I’m a very pleasant person,” Joseph says. “I rate myself as very happy.” And, he adds, happiness may be a bit underrated.

“There are a lot of artists who have made a good living from melancholy,” Joseph says. “Their gift is that they’re able to absorb a lot of shit and write about it—grim, dreary things. And I look at them with a lot of suspicion, and I try to understand, is there a literary value here or is it the value of sorrow?” Indeed, with Happiness, Joseph has made a convincing case for exploring the depths of joy the way so many of his predecessors have plunged into melancholy.

Jaime Netzer is writer-in-residence at Texas State University's Clark house, where she is at work on her first novel. Her writing has appeared in Variety, Twelve Stories, and Corium Magazine, among others.