This Immigrant Life in ‘Unterzakhn’ 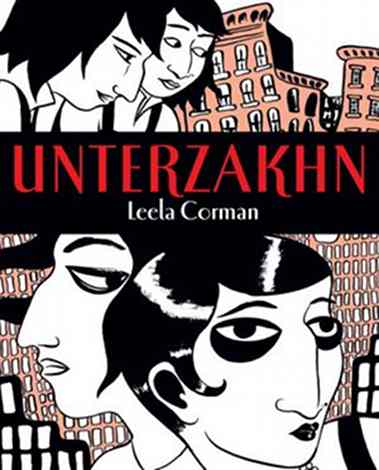 Their paths should have been set. Two twin girls, two unterzakhn (Yiddish for “underthings”) are growing up in early 20th-century New York on the Lower East Side, not quite in deep poverty but not exactly living privileged lives.

Read more new and notable fiction this May.

Their mother has decided to keep them out of school—why would someone who is merely going to become a wife and mother need to know how to read anyway?—and both are a little feral. But instead of living the lives set up for them by their time, gender and family, they go forth, in separate directions, eventually splintering from one another.

Leela Corman uses their chosen directions in her graphic novel Unterzakhn. Fanya begins helping a midwife and watches as women suffer from homemade abortions, unplanned pregnancies and less than ideal husbands. Esther begins work at a burlesque only to be drawn into the back rooms of a brothel to illuminate the darker side of being poor and female. Never drifting into melodrama, Corman is more interested in telling a good story than pursuing a political viewpoint.

I talked to Corman about why she chose the era—if it was simply to get to draw all those amazing clothes—and how the fierce women of the era, the Margaret Sangers or the Emma Goldmans, may have inspired her.

What was it about this era that made you want to set this story there, particularly a story about women trying to live well during hardships?

The subject chose me to a certain extent. Fanya appeared one evening while I was doodling on a napkin, and with her came her entire family and their neighborhood. Once I knew where they lived, I had my work cut out for me in terms of research.

I can't really explain why I was so drawn to a story about women and their hardships in retrospect. I mostly approached it as a human story. But, I did start out wanting to talk about choice, about the ramifications of not having it, about how gruesome life can be without it.

I knew a little about Margaret Sanger's early work as a visiting nurse in the area and was very inspired by her. Much of the process of creating fiction is mysterious, though, isn't it? Even to the creator? There were many aspects of the story that showed up uninvited and demanded to be included. And being a woman is risky.

I was intrigued by Bronia. I kept wanting her to show up more and for her backstory to be told. The story as it is is remarkably compact. Were there elements and characters you felt like you could have expanded upon? Other threads you could have followed?

There are always other threads that could have been followed. Many ended up in the discard pile, because they distracted from the larger narrative. You have to be a bit ruthless when editing.

Bronia was what I'd call a secondary character—she effects changes in the main characters, but isn't herself one of them. Some characters are primary, and you need to know more about them. Then there are characters who aren't even really characters, they're devices, like Feigl.

Fanya's feminism was also so interesting. How much research did you do into that time? I was thinking of Margaret Sanger and Emma Goldman...I thought it was an interesting twist on the matter, the way she, who must have seen so much suffering from unwanted pregnancies, became radicalized.

That's reportedly what happened to Sanger, and that is exactly what happens to Fanya. It's funny, I never think of my characters, or myself, as particularly feminist, terrible, I know...someone is gonna get me for that, I'm sure, because I'm not really any kind of -ist, except human. But recent events have made me reconsider use of that word.

I love Sanger and Goldman, and feel extremely grateful to and humbled by the feminists who made our modern world. I feel very strongly that any freedoms I have, I have because someone else fought and suffered for them. I live on their largesse and hard work.

Fanya is, I think, mostly just trying to do her job and wants to be honest about it in a way that Bronia cannot. This is partially due to Fanya's impulsive nature, but it's also a little generational. I think that both are pragmatists at heart, who see their work as simply contending with the realities of women's lives.

Also that era and those clothes! Visually it was such an interesting time, and the brushwork with Esther and her clothing and her hair and her wonderful eyeliner...What visual references were you using along with the story?

Oh, whatever I could get my hands on! Whatever costume resource you can think of, I probably used it. Fashion-era.com was a huge help, as was Google Images, and Dover puts out these great collections of clothes and accessories of different eras. I had a few. At least one came from the Sears Catalog, which I think must be a great resource for how ordinary people dressed. As Esther came into more money, I began to look at photographs of celebrities from that time period. In the scene where she goes to the fancy party where the two corset queens are making fun of her, she's wearing Joséphine Baker's dress. At her sugar daddy's funeral, she's wearing Greta Garbo's coat.

I also want to say that I have learned a lot from reading the "Mad Style" posts on tomandlorenzo.com. They write really great essays analyzing each episode of Mad Men, and then they write a companion essay about the semiotics of the clothes on that episode. It is fascinating. I brought some of that into Unterzakhn, though it's harder to see in a black-and-white comic than it is on a colorful TV show. Esther always wears black undergarments, did you notice that? There are other ways I brought that in, too.

Not to give too much away, but it ends rather darkly. Not that it tromped around in the lighter regions for the rest of the book. It's probably appropriate for the era—those were not easy lives that the sisters chose, and lives like that tend to have consequences. But did you have to stop yourself from writing a wish-fulfillment ending, where everything works out for all concerned?

Ha. No! I was very inspired by Fatih Akin's film Head-On. I don't want to spoil it for people who have yet to see it, but the characters, and most importantly the audience, doesn't get what they think they want. American storytelling is too full of happy endings.

Jessa Crispin is the founder and editor-in-chief of Bookslut.