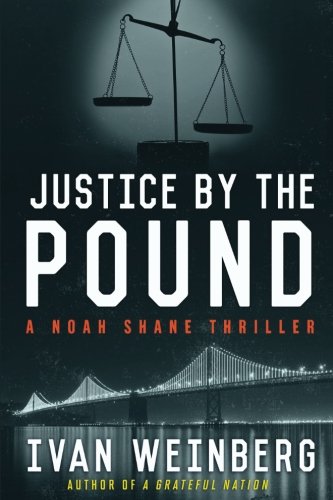 When author Ivan Weinberg name-checks the Harvard Law School novel The Paper Chase (1970) in his second legal thriller, Justice by the Pound, it’s not just a pop-culture shoutout. Weinberg is a practicing attorney in Mill Valley, California, in medical litigation/mediation.

“Justice by the Pound came out of my stint in the public defender’s office in Alameda County,” says Weinberg. “I was interested in how the lawyers in both the DA and PD offices burned out in relatively short order, became totally rote in their presentations, counting the days to retirement and calculating their civil service pensions. That wasn’t what I went there for.”

But down these mean dockets a man must go, and Weinberg channels the likes of Michael Connelly and John Grisham in his premise—a neophyte who first wants off a tough case, then digs dangerously for the truth.

In Justice by the Pound, which Kirkus calls “an all-round solid thriller,” rookie Noah Shane has a bad first week. Pablo Ruiz, 23, is initially accused of stealing 300 pounds of...butter. But then Ruiz gets implicated in the sensational murder of stockbroker Warren Van Zandt, now bullet-riddled in a Bay Area sewage plant. Pablo has no priors. Pressure builds to burn him. Freshman Noah Shane is already over his head, going against his bosses and local power structure, and through his perspective, Weinberganimates the scales of justice tipped against the have-nots.

Weinberg talks about the ways his own law experience feeds his fiction. “I did see that there was a sameness to the cases, and I found that I often cared more about the outcome than anyone in the courtroom—including my client, who had been to the joint a number of times and was pretty much resigned to going back. So I got to thinking, what if there was a real life on the line? What if my kid was clearly not guilty and was confronted with the death penalty? How would I deal with that?”

Don’t assume that Justice by the Pound is a village “cozy” with recipes. The title references a cynical game among Noah’s cohorts, their low-income clients fated for inadequate defenses and treated like cattle:

“There’s this pool,” Sandy told him, chomping a few popcorn kernels.
“Everybody puts in five bucks, and there’s a drawing at the end of the week. You get the weights off the jail intake sheets and you add them up. Whoever’s total gets closest to the number that was drawn takes the pot.”

Readers may already know Noah Shane from A Grateful Nation, Weinberg’s 2015 debut. Justice by the Pound is a prequel, visiting the protagonist’s origins as a fledgling lawyer. Weinberg says that Noah Shane is somewhat autobiographical: “Noah is a Jewish kid from Beverly Hills who spent a lot of his early years being successful in sports, then went to Stanford and abandoned the concept. He stumbled into the practice of law by accident without any major career aspiration. I think Noah is really a confluence of some things I was, some I wish I’d been, and some I’m glad I wasn’t….So I guess I’m trying to grow up with Noah….And the beat goes on—into novel No. 3.”

One aspect of Weinberg’s CV that differs from Shane’s is the author’s association with a blockbuster Hollywood producer/novelist who helped push him into storytelling. Weinberg attended high school with the late Stephen J. Cannell, who created legendary TV, from The Rockford Filesto 21 Jump Street. Cannell’s novels include bestsellers King Con, Viking Funeral, Vigilante, and more. After graduation, the pair remained close, the producer/writer listening to Weinberg’s work tales. Cannell fetched Weinberg an agent and encouraged him to write what he knew.

Justice by the Pound owes its titular notion to Cannell, says Weinberg. “The justice-by-the-pound competition was something Steve Cannell had heard about through the police grapevine, and I appropriated it as a metaphor for the burned-out public employee—here public defenders—experience. The contrast to that burnout is Noah’s emotional investment, first fueling his efforts to extricate himself from the case and later to extricate Pablo.”

Weinberg says that his own prose diverges from Cannell’s “very visual” style. Weinberg takes pains to evoke the seedy San Francisco Tenderloin that young Noah calls home, an ongoing cast of friends (and potential love interests), and flashbacks to law school (the apt Paper Chasereference). Character-building incidents (Noah does pro bono work for a single-mom addict in his building) engage reader sympathy as much as any jury summation.

Even if he and Cannell had different M.O.’s in their writing, Weinberg confesses to imagining his books turned into films. “I see Noah played by a young Elliot Gould or now maybe a Ben Stiller. It has to be someone with an inner strength but with a sense of humor close to the surface. Oh, and being Jewish shouldn’t be a total loss.”

The next planned book plunges Noah Shane into the world of illegal performance-enhancing drugs. Underneath, he evolves further, Weinberg steering Noah through fatherhood. Meanwhile, the author continues legal work. “It’s a pretty packed day currently, and I need to set some more indelible limits, because writing is my passion. That said, I do like what I do in the practice too. And it does keep me off the streets and out of the bars.”

Weinberg says he has the third novel half done, and “Noah and I are still on pretty good terms.”