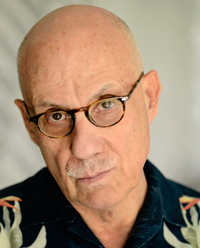 Size matters. For an author with the epic ambition of James Ellroy, bigger is better. Even a doorstop epic like his new crime novel, the 720-page Perfidia, is but part of a grander scheme, a project of such scope and scale that it will encompass every major novel that Ellroy has published.

“This is the chronological beginning of my life’s work,” explains the author, as he returns to the crime noir of his much celebrated L.A. Quartet, which provided his popular breakthrough with 1990’s L.A. Confidential. He subsequently extended the geographical reach and chronological progression of his fiction with the Underworld USA Trilogy, which encompassed the Kennedy assassination and all sorts of conspiracy subplots. With Perfidia, he has come full circle, back to the beginning.

“I’ve never written a book set earlier in time than this one. Readers can begin here, go forth to the L.A. Quartet, which begins in 1946 and ends in 1958, and the Underground USA Trilogy, which extends from ‘58 to ‘72, with the assured knowledge that all three bodies of work are seamless.”

He has returned not only to the fictional terrain that he’s explored so well, the dark underbelly of the City of Angels, but to the more straightforward style that preceded the staccato bebop of White Jazz (the last volume in the L.A. Quartet) and the density of the Underworld USA Trilogy’s American Tabloid and The Cold Six Thousand (“crazily complex,” he terms the latter). He sees Perfidia as the launch of the Second L.A. Quartet, perhaps the crowning achievement of his career.

“It’s my favorite among my books,” he says. “It’s the deep, unfettered, never-before-released, throbbing heart of me—juxtaposed against America’s big coming-out party in December of 1941. It’s my Ragtime, in that, like Doctorow’s great novel, it’s a romanticized recounting of a great time in our history. And by that I mean big people, big ideas, big conflicts, big hearts, big moral and political stakes at play. And a lot of sex, a lot of people with more than one person at one time.”

Within the novel, America’s entry into World War II serves as a background for a tightly-wound, on-the-clock chronicle of a city on the make and on the take. The starred Kirkus review says, “Though it pivots on the Pearl Harbor attack, this worm’s-eye view from thoroughly corrupt Los Angeles is a war novel like no other…Ellroy is not only back in form—he’s raised the stakes.”

It finds characters that have dominated Ellroy’s fiction—The Black Dahlia’s Kay Lake, the police antagonists William H. Parker and Dudley Smith, whose rivalry extends through the L.A. Quartet—taking center stage as if for the first time, mixing with scandalous depictions of Bette Davis and other Hollywood glamorati.

And it provides the foundation, with the emergence of Hideo Ashida—“the only Jap employed by the Los Angeles Police Department,” says a colleague—for his next novel’s immersion in the Japanese-American interment during the war.

Of Perfidia’s inspiration and the genesis of the Second L.A. Quartet, the author explains, “On a cold Saturday night in L.A., I was sitting at my desk drinking coffee, and I was brooding. And I had a synaptic flash—across my brain pan I saw a picture of armed soldiers, shackled Japanese Americans, headed through the snow-capped Sierras to the detention camp. And immediately I thought, ‘Oh yeah, the Second L.A. Quartet. Oh yeah!Characters from the initial quartet and/or the U.S.A. Trilogy back in L.A. during World War II as significantly younger people.’ And that was it!”

Surprisingly soft-spoken and reflective during a phone conversation, the 66-year-old Ellroy shows no signs of mellowing in his fiction, and he promises that his forthcoming book tour will find the self-proclaimed “demon dog” of American crime salivating for red meat. Of all the characters he has created, the performing persona of James Ellroy might well be the most over the top.

“By and large, I live a cloistered life,” he explains. “I have a few friends. The landline on which I’m talking with you is my lifeline. I brood a great deal. I hole out for days on end.

“So when I have a new book and go out and perform, I’m like a dog cut off his tether. And I can go chase cats. Or urinate and defecate at will, out in the woods. It is a public performance that many writers shy away from, just the sheer drama of reading. And I want to create drama. I’m there to entertain you, to interact with you. I’m there to honor the people who buy and read my books.”

Don McLeese is a journalism professor at the University of Iowa, a veteran literary and music critic, and the author of three books.