Up in the Air With Novelist James Hannaham 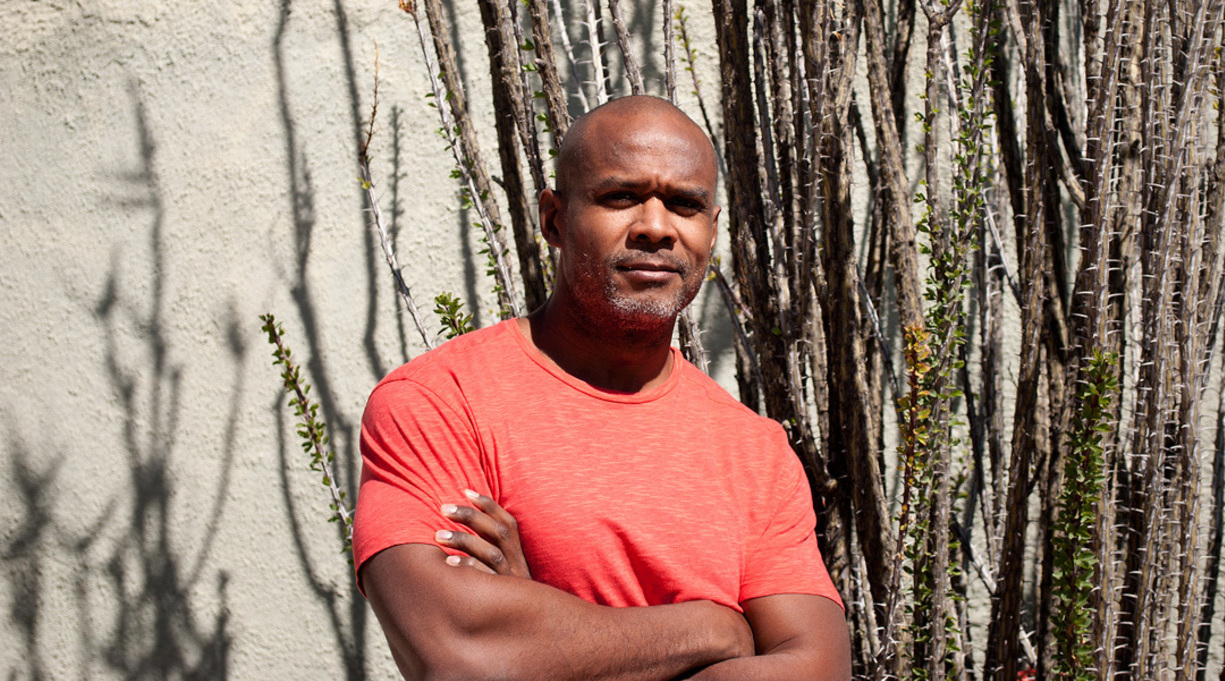 Where to even begin with James Hannaham? A visual artist, award-winning writer, and performance artist, everything he creates, from his text-based art—a “Jim Crow HELL NO” sign in flashing neon—to his latest, a multigenre response to the poetry of Fernando António Nogueira Pessoa, offers a singular, witty slant. In Pilot Impostor (Soft Skull Press, Nov. 30), he tackles race, reality, identity, bad leadership, etc., in a collection of prose poems, flash fiction, satire, photographs, and drawings—all while inviting readers to both reconfigure their way of seeing and watch out for that Acme anvil falling from the sky. Our reviewer calls Hannaham “one of the country’s smartest and most surprising writers of fiction (or whatever this book actually is).” We spoke with the author about the TV show Air Disasters, Claudia Rankine, and his previous book, Delicious Foods; the conversation (conducted via email) has been edited (on a plane, coincidentally) for length and clarity.

Lines from the poet Fernando Pessoa occur throughout the book—“Perhaps those who are good at seeing are poor at feeling” or “This may be the last day of my life.” Why Pessoa, and why use his various heteronyms?

Pessoa because of my trip to Portugal in December 2016. I had never been to Portugal, so I did some research beforehand to find something good to read while there, and I came across the anthology Pessoa and Co., translated by Richard Zenith, and for various reasons—not least the fact that I was in a plane on my way from Africa to Portugal—I decided to respond to every poem in the book; it turned into a daily practice. If you have Pessoa and Co., you can follow along, although it isn’t airtight. The photographs and design pages stand in for writing that I edited out. I think the lines you noticed are actually footnotes that indicate which poem I was responding to. It’d be difficult to use Pessoa without his heteronyms. That would be like using e.e. cummings without his punctuation.

Your last book, Delicious Foods, has an unusual main character (a crack rock named Scotty) but follows the format of a traditional novel. Pilot Impostor blends fiction, poetry, prose poems, photography. What drew you to work with multiple genres?

I’m amused that you envisioned Scotty as a “crack rock.” I guess I thought of Scotty as a shape-shifting consciousness, more often composed of smoke than, like, a talking rock. That’s funny. And to say that Delicious Foods “follows the format of a traditional novel” seems kind of misleading. Do traditional novels jump around in time that much? And geez, what format was I following? I was just telling some of my students today that one of the interesting things about the novel, before America got its hands on it, is that it was really just a bunch of pages. What might be on them, while it frequently met certain requirements, could potentially consist of almost anything. Novels still don’t really have “rules” the way poetic forms do. I was drawn to Pessoa because each of his heteronyms has a different style, and though I am one person, I have done a lot of different types of writing and performance, and I do a lot of code-switching. I am endlessly fascinated with how much you can convey about a character, a situation, and a story just through voice, tone, and word choice and how real human beings reveal themselves all the time through their use of language.

Claudia Rankine has said she wrote about air travel and race because she “wondered, what is this ‘stuckness’ inside racial hierarchies that refuses the neutrality of the skies?” What drew you to write about planes, ships, and trains?

Thanks for bringing up Claudia Rankine; Citizen was a huge inspiration to me. I didn’t just think there should be more books that did similar things, I tried to do something about it! I suppose I had several reasons to write about air travel; I was traveling a lot in 2015 and ’16. I thought of writing Pilot Impostor while reading Pessoa on a plane going from Africa to Portugal. Air corridors are the trade routes of the modern world, aren’t they? I was also obsessed with a television show called Air Disasters,a procedural that chronicles a different aviation mishap every episode. It wasn’t just that it was sensational and difficult to stomach, but the writers had to tell a very similar story in a totally different way on each episode. For authenticity’s sake, this show would always use actors with the appropriate nationalities as pilots, crew, and passengers in their reenactments, so without calling attention to diversity, they probably hired more actors of color more consistently than any other show on TV.

No, I wouldn’t call it a relief valve. It represents a worldview, really. The tragic and the comic are sometimes one and sometimes not, and there’s a lot of vital energy in the push and pull between the poles, if they are even separate. Some things you can only get through by laughing and weeping alternately until you reach stability. It just feels realer and packs more punch to me when writers and artists acknowledge and play around with that dynamic. No one ever asks this question in reverse, I notice. Like, Do all the serious parts just provide a little coffee break from the humor?

You say, “We only see impending doom in aftermath.” Is Pilot Impostor meant as a wake-up call?

Well…sometimes you can’t even see what was coming in retrospect. You look back and realize there was no indication that something absolutely devastating was about to occur. Air disasters and other system accidents are frequently the result of several unpredictable things going wrong at once, bad consequences piling up on top of each other. The Tenerife disaster of 1977, one of the worst ever, is a horrifying example of what can happen when many unpredictable things and bad decisions all happen at once. I guess I would like to suggest to people that we should try to do something about the disasters we can see coming because there are others we can’t even imagine waiting in the wings. That might qualify as a wake-up call, but man, we have been hitting the snooze button for a long time.

How did you choose the images, which range from abstract geometric shapes to photographs of grates and greenery to a still of William Shatner in the episode “Nightmare at 20,000 Feet” of The Twilight Zone?

Most of the photos are snapshots I took of all the textures of Lisbon and the surrounding area, especially the nearby coast. Originally I had intended to design the book as I wrote it. I abandoned that idea, but whenever I removed a piece while editing, I would include a screen shot of a page I designed with the words removed. A few of the images are illustrations of things in the text but not many. Once the book got sold to a publisher, I had to get photo permissions for a lot of things and found that process so vexing and expensive (I paid out of pocket on a tight budget) that in some cases, when a photo I had grabbed off the internet was out of budget, I would just make a drawing of the image instead. This has now become a separate project.