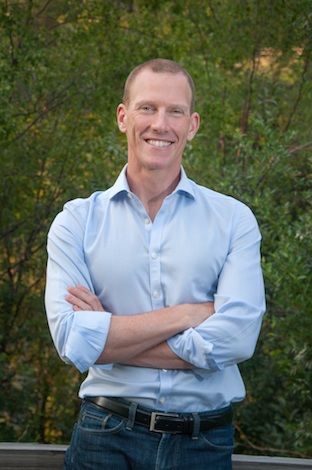 It wasn’t enough for Jamie Metzl to write a near-future thriller about the systematic murder of several pregnant young women and the intrepid Kansas City reporter who will do anything to discover the truth behind their deaths and their link to a prominent televangelist. Metzl, a former member of the National Security Council and current Senior Fellow of the Asia Society, has more ambitious plans for Genesis Code: he is “absolutely” warning us about “a possible future.”

In Metzl’s 2023, the U.S. is in serious debt to China, and our economy is in a more dreadful state than ever. In response, a bipartisan government has enacted laws to reignite the American competitive spirit. In the present day, “we’ve locked ourselves into this struggle, Democrats and Republicans,” Metzl says. “To remain competitive we really need to get our act together.” When I expressed my incredulity that our currently polarized government could surmount party differences, he argued that “stranger things have happened. If there are aspects of our system not working, we’ll find a way to fix them.”

Part of this future government’s policy includes expanded immigration, which Metzl sees as a “secret weapon to restore all of our glory, and then some.” It would be a true game-changer “if we decided it was our mission to recruit the most skilled people in the world, help them set up businesses, find wives, have brilliant children.” Today’s policy to restrict immigration is “an idiotic struggle that’s not working. [We have] brilliant people coming here for their education, and then [we’re] kicking them out when all they wanted was to stay.”

Metzl also posits that newspapers will be subsidized by the government, and in exchange, agree to allow censorship by the state when national security requires it. “Sadly, I grew up like many of us, where newspapers played a very important role,” Metzl says. “Newspapers now are struggling; in this somewhat dystopian view of the future, they do a deal to get a bailout—they’re unable to say no to a national security exemption.”

But Metzl strongly believes that newspapers still provide a key service, one which bloggers can’t replace. Blogging lacks “that filtration that news provides. In this decentralized media environment, there’s a greater opportunity for manipulation. It lets everyone be their own editor, getting a lot of raw data from the world....Things have become very impressionistic. In China, there’s a huge number of bloggers who are paid by the government to counter certain blogs.”

Central to the plot of The Genesis Code is a scheme to develop viable genetically modified embryos. “I strongly believe that in the not-too-distant future, sex will remain a very important recreation, but it will come to be seen as a very dangerous method of procreation….Embryo selection will be the future of our species….It will happen in stages. Our species is right on the verge of evolutionary management. We as a country may or may not participate, but the world will. What happens when China does it, and we’re not doing it? Will we do nothing? Will we in some way try to match it? It’s a fascinating question.”

But how soon could all of this come to pass? Could it really happen as early as 2023, the year of Metzl’s novel? Metzl says no, actually. “The reason I made it closer was to make it feel familiar. If it’s too far away, people might think it would never happen,” he says. “But human genetic enhancement is coming far more quickly than we expect. Certainly by 2023, we’re going to be very seriously engaged in genetic selection. We’re doing it now. We can read the genome—we can screen embryos for gender, genetic diseases.”

In the future, Metzl says, we will be able to accomplish “miraculous things to improve the quality of our lives. We will have this capability to influence our evolutionary process. And some of us will deal with it hubristically. We have to find a way to deal with this wonderful magic. We can’t err on either side. We can’t stop from treating disease but not everything can be permissible. But to get to the point, we need to have the conversation. And we’re not having the conversation….This book is an effort by one person to spark the conversation.”