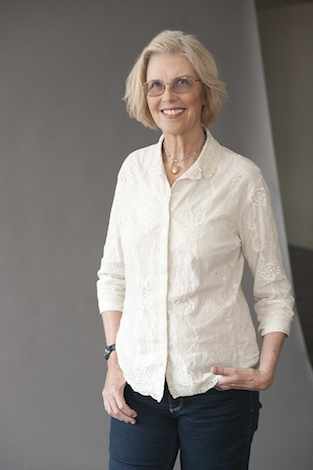 Jane Smiley is one of three siblings. Her mother was one of five, and her grandfather was one of 10. That meant cousins and second cousins, and lots of them.

“There was this sense of there always being someone around to play with or to criticize or to talk about—and my family were very big talkers about,” Smiley says. “My mother and her various siblings and my grandfather were terrific storytellers. My grandparents had had a fairly adventurous life, things hadn’t particularly gone well, but they had a great talent for turning all of those anecdotes humorous, rather than sad. Somebody would tell us a story, and we’d all laugh. Later, in the kitchen, another aunt would say, ‘No, it didn’t really happen that way. This is the way it really happened....’ It was a wonderful way for a novelist to grow up.”

Smiley is the acclaimed author of over a dozen novels, including the Pulitzer Prize–winner A Thousand Acres, two short story collections, several works of nonfiction and a handful of YA novels. She was born and raised in C alifornia but studied literature in upstate New York (BA, Vassar College) and Iowa (MA, MFA, Ph.D., University of Iowa) and often bases her stories in rural America.

For The Last Hundred Years Trilogy, chronicling the life of the fictional Langdon family, Smiley returns to Iowa. Book 1 of three, entitled Some Luck, begins in 1920 with the birth of farmers Walter and Rosanna’s first child, Frank. He’s delivered with the assistance of the inebriated town doctor, according to family lore.

From infancy, Frank is a handsome boy who exhibits a keen mind. “Now that he was crawling, Frank found that many doors were closed to him....It seemed that he could never get anything to his mouth that he actually wanted to get there. Whatever he grabbed was immediately removed and a cracker was substituted, but he had to explore all the features of crackers, and there was nothing more about them that he cared to find out,” Smiley writes.

Smiley affords the same consideration to capturing Frank’s knee-high vantage as she does for an adult’s point of view. “I wanted to write about how a person evolves through his or her whole life, and that was one of my main inspirations,” she says. “I also wanted to see how individuals live through history, what it means to them as they experience it and then as they look back upon it.”

It’s hard not to see second son Joe in relation to his older brother—and he’s no match: “It was as if God had picked all the worst features of both families and given them to Joey,” Smiley writes. Even father Walter is inclined to feel a bit brushed aside: “And now he was a farmer, and no longer a boy, and it was disorienting how quickly Frankie was superseding him as the hope of his own father and mother and wife for something that had nothing to do with Osage-orange hedges and badly sited barns and too many cows and not enough hogs (or vice versa),” she writes. Rosanna gives birth to four more children, Mary Elizabeth, Lillian, Henry—whom she delivers all by herself, while Walter and the kids are out—and, finally, Claire. And though the narrative meanders from one to another, painting a vivid portrait of a highly individualiz

ed group in clear and unsentimental prose, the collective gaze seems to return, time and again, to the firstborn son.

“I intended Frank to be the main character, in the sense that everything revolves around him though he’s not in every scene, and every plot isn’t oriented toward him,” Smiley says. “Let’s call him the central character. He’s the trunk of the tree that grows up in the middle and is a little bit thicker than the other branches—not to say that he’s my personal favorite.”

While writing the trilogy—all three volumes have already been turned in to her editor—Smiley says that she “got to feel like I was part of the [Langdon] family, and so I would have feelings about each character that varied along the way. I would be annoyed with somebody sometimes, and I would be partial to somebody most of the time and would be critical of some, which was quite interesting to me. I’m very fond of Lillian—I’m very fond of Henry, because he’s so eccentric—and I’m interested in Frank, because he’s adventurous, but my level of fondness for him varies as he pursues his various activities.”

That Frank will pursue his various activities off the farm becomes apparent early—he cannot be contained. But the early lessons of farm life—especially the cold hard fact of mortality—color his adventures as he attends college, performs sniper duty abroad during the second world war and starts a family of his own.

“On a farm, you knew that you could die from anything, or you could survive anything. ‘Why?’ was a question that his relatives never asked—they just told the stories, clucked, shook their heads,” Smiley writes.

Some Luck ends in 1953, but the Langdons live on. Book 2, slated for publication in spring 2015, will extend the narrative and modify some seemingly self-evident truths. It’s a mode of telling and retelling that closely resembles the one Smiley learned early on, in the parlor with the whole family, and the subsequent kitchen debriefings, all those years ago.

Smiley turned 65 at the end of September. “You look back on your life and it seems to have been pretty short,” Smiley says. “A lot of things that were actually long, long ago seem quite present to you, so I wanted to get at that feeling” in Some Luck, she says. “But also, sometimes, events come and go, too, and these things that are very important to us at the time, that have the quality of a climax in a novel—they pass.”