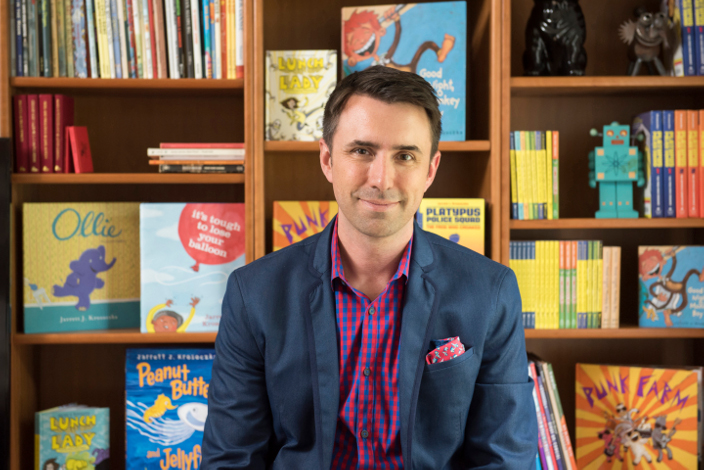 Jarrett Krosoczka was just 3 when his mother first disappeared from his life. He had never met his father. And yet, he grew up with two loving, if sometimes-difficult, parents: his maternal grandparents, Joe and Shirley.

Krosoczka’s graphic memoir, Hey, Kiddo, recounts the challenges of this childhood, from coming to terms with his mother’s heroin addiction to meeting his father for the first time. The book is both profoundly empathetic and almost shockingly honest, as Krosoczka depicts the adults in his young life doing the best they can even when they often let him down. “I really realized that if I wanted to write this I had to be brave enough to go all in and really tell the story,” he says.

Krosoczka initially thought of telling his own story right after he sold his first book, when we was just 21. But at the time he didn’t have the emotional distance he needed to tell it clearly. “When I was in my early 20s everything was still very much in black and white; there were the heroes and villains of my life,” he says. It was only as he grew older, and had a family of his own, that he started to think about how difficult their separation must have been for his mother.

However, Krosoczka still struggled to talk about his mother when he started writing Hey, Kiddo. An early draft barely included her, but his editor insisted his relationship with her was a vital part of the story.Then, while he was finishing revisions of the book, his mom died of a heroin overdose. “Visiting her house after she died and seeing her heroin needles and just the mess of the place, it made me realize that she couldn’t help herself,” he says. “Once she got into heroin, she was there and she was stuck.”

Hey, Kiddo is far from Krosoczka’s first book, but he felt a unique sense of responsibility to this more personal story. “I definitely felt the gravity,” he says, recalling “waking up in the middle of the night and remembering moments or scenarios that I might want to put in the book.” He even dug up his old art as well as a collection of family artifacts and letters to add a sense of authenticity to the story.

The book’s art is mostly grayscale with a single accent color, mirroring its often difficult material. Although graphic novelists typically hire someone else to handle coloring, Krosoczka was adamant that he handle every part of this creative process himself. He did all of the ink washes to create the gray shading by hand and added the accent color digitally. “We settled on the color burnt orange because that was the color of one of my grandfather’s pocket squares that he would wear all the time and that my eldest daughter then took after he died and used as a security blanket,” he explains.

Krosoczka wants kids who are struggling with the same issues he did to know that they can overcome those challenges. He’s managed to build not only a thriving career as a writer and illustrator, but also a family of his own. “The realities of your current circumstances don’t need to dictate who you become into adulthood,” he says.