A Tale of Two Jasons, in Words and Pictures 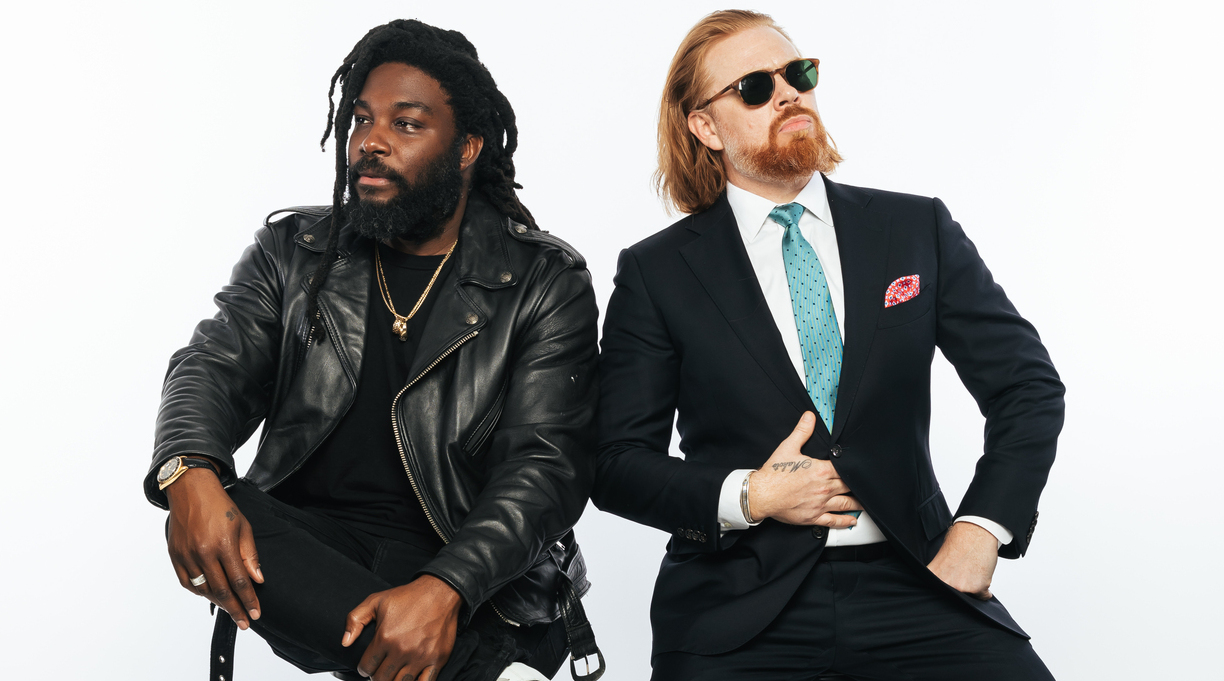 Jason Griffin and Jason Reynolds have thrived as collaborators practically since they met as students at the University of Maryland. Their personal and artistic friendship led to a 2005 book of Griffin’s art and Reynolds’ poetry, Self, which they followed up with 2009’s My Name Is Jason. Mine Too: Our Story, Our Way. Combining Griffin’s collages, paintings, and line drawings with Reynolds’ poetry, My Name Is Jason tells the story of two budding artists struggling to make a name for themselves while trying to enjoy the ride as well. As Reynolds writes: “It’s just / So hard / To explain to people / That my life / Is not unhard / But not unhappy.”

My Name Is Jason didn’t make much of a splash at the time. But in the years since, the two Jasons have more than fulfilled their early ambitions. Griffin has exhibited his artwork globally, while Reynolds has become among the most successful YA authors working today, writing a string of bestsellers that includes a Newbery Honor recipient, two National Book Award finalists, and a Kirkus Prize, plus a stint as the Library of Congress’ National Ambassador for Young People’s Literature.

All the while, the two Jasons have kept collaborating. Earlier this year they published Ain’t Burned All the Bright, a story turning on Covid and 2020’s racial reckonings, combining three long sentences by Reynolds and artwork that Griffin had been producing in Moleskine notebooks. That book’s release provided an opportunity for their publisher to reissue My Name Is Jason (Caitlin Dloughy/Atheneum, June 28). The two convened on Zoom—Reynolds from Washington, D.C., Griffin from Queens, New York—to talk about the anxiety of revisiting their early work, the intuitive nature of their work together, and how the best collaborations emerge from trust and vulnerability. This interview has been edited for space and clarity.

How does it feel putting My Name Is Jason. Mine Too back into circulation now?

Griffin: I think that it provides context for Ain’t Burned All the Bright. At the time, it was just what we were going through. But now I think it’s really interesting to look back at it, to see it as almost our origin story.

Reynolds: I’m still uneasy about it. It’s like publishing juvenilia. Don’t get me wrong, because what Jason is saying is true. It does give context. That being said, it’s tricky to put out work that you wrote when you were 20, 21 years old. Jason is 40. I’m kissing 40. Both of our careers and lives are different. It’s important to know that this is a 20-year-old thing. I would hate for people to think this is what we put out today. We were kids.

How are you different artists now?

Griffin: We were more likely to take certain risks then than maybe we would now. I don’t know if I would say I’m better now, I’m just different.

Reynolds: I’m definitely better now [laughs]. But that being said, I just feel more like myself. I just feel more comfortable with and more confident in who I actually am. At 21, 22, 23, you’re sort of feeling out the self that you’re becoming. You got on the pants that you’re gonna grow into, so everything is a little awkward. You never stop growing, but the pants do fit a little better.

The book is also interesting in how it models male friendship, a big theme in your fiction.

Reynolds: That’s what I write about the most. My whole thing is that for the friendships to ring true, they have to possess some sense of vulnerability. I’m not so sure that a friendship is a healthy friendship without it. So I try to write about boys who are connected but also are able to be compassionate and sensitive and hold each other accountable. A lot of stories are romps, boys being boys. But I’m more curious about, what does the friend do when the boy says he’s afraid?

Ain’t Burned All the Bright turns on Covid and the murder of George Floyd. Did you feel an urgency to get the story out because it was on the news? Or take your time with it because it is an art book?

Griffin: Urgency is the right word. Not because it’s timely, but because as artists, we had to get it off our chests. We were working on another project, but as Jason says, 2020 was like a year of suffocation. There

was so much stuff going on that it felt like our brains just stopped running. There was so much information coming in, it was hard to process things. I was doing therapy over the phone and talking to my mentor, Joanna Cotler, who published My Name Is Jason. Mine, Too, and they were like, “You need to keep like a sketchbook of these things that you’re hearing on the news.” But I was really dead set on making this other project, and it was almost like I had barricaded myself or put up a boundary that wasn’t necessary. And it wasn’t until I was talking to Reynolds on the phone and saying, “I’m filling up Moleskine sketchbooks all over my house. And it’s served as kind of an oxygen mask.” Something clicked with that term—oxygen mask—for both of us.

Reynolds: There’s never really been a moment in my individual career or in my collaborative career where the urgency to publish has anything to do with me. The business urgency is the business urgency. It’s got nothing to do with me; we don’t even have those conversations. I think we try our best to make sure that we’re always working with the kind of urgency that is inside out.

How does your collaboration work?

Reynolds: It’s like a trust fall from the top of a skyscraper. When Jason said “oxygen mask,” it triggered lots of things in my body. And I wrote a sentence, a very long sentence, and I took all the punctuation out of the sentence and sent it to him. “So this is a string of words now. And you can break these words up however you see fit on the page, whatever this does to you.”

Griffin: That was the extent of him giving me input on the visuals. That’s it. I can’t even count on one hand the times that we’ve checked each other—me checking him on the writing or me on the art. It just doesn’t happen. There’s 100% trust there.

Reynolds: There was one line toward the end that I broke differently. “Let’s move this word here.” That’s the answer, and we move forward. We just don’t have a lot of back and forth.

Griffin: Here’s a little thing that I do in my studio: I’ll search for an interview where Reynolds is talking just to have his voice on in the background, so that I can try to channel him along with my input. Because this is about not just the writing or the art, it’s about both coming together. It’s always important for me to have his voice there.

He’s over your shoulder, but he’s not telling you what to do.