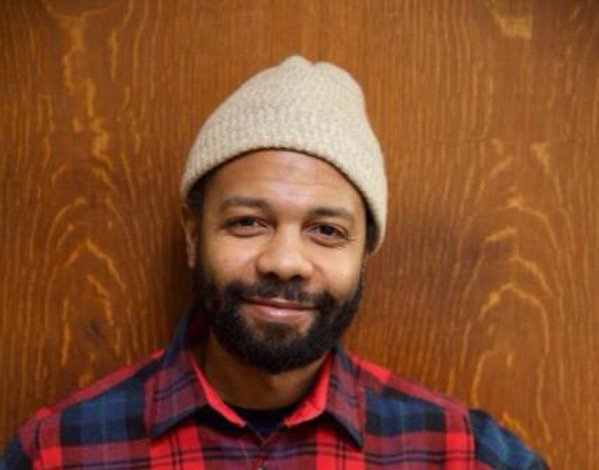 “Radiant, wild, a genius child” are just some of the words people use to describe Jean-Michel Basquiat.

“There’s this narrative where people speak about Basquiat—he’s primitive, he’s a wild child,” says Javaka Steptoe, the author and illustrator of Radiant Child: The Story of Young Artist Jean-Michel Basquiat.

Radiant Child is a gorgeous, humanizing portrait of the artist, for young readers ages 6-12. From Basquiat’s Brooklyn boyhood to his meteoric ascension through the Manhattan art world in the 1980s, Steptoe tells the story in lyric prose and paintings done on scraps of wood scavenged from New York City neighborhoods.

“[Basquiat] kind of comes from where I come from, as an artist,” says Steptoe, who also grew up in Brooklyn. “He looked at cartoons, I looked at cartoons—he got images from comic books—he grew up in the beginning of hip hop, I grew up at the beginning of hip hop. I was there when New York was really grungy—graffiti all over the walls and abandoned buildings, people squatting. Those are his times and those are my times. So there’s this emotional, nostalgic connection that I have with him that’s beyond [appreciating his art].”

Steptoe has been a fan of Basquiat’s bold work since he was a student. But it was as an adult and artist, at a 2005 exhibit at the Brooklyn Museum, that he realized he wanted to share the late painter’s life and work with the next generation—especially those readers who could identify with the people and places that shaped him, as Steptoe did.

Of Haitian, African-American, and Puerto Rican descent, Jean-Michel “draws from morning until night with a serious face amid a storm of papers,” Steptoe writes—inspired by the vitality and energy and colors of the city.

“Somewhere in Brooklyn, between hearts that thump, double Dutch, and hopscotch, and salty mouths that slurp sweet ice, a little boy dreams of being a famous ARTIST,” he writes.

Jean-Michel’s beloved mother, Matilde, encourages his art and gives him an influential anatomy book when he’s recovering from a traumatizing accident. But not long after that, she’s in and out of mental institutions for the rest of her life. He’s inconsolable.

“He tries drawing the terrible out of his blues, but things are not the same,” Steptoe writes. “As Jean-Michel grows older, he visits his mother when he can, always bringing his artwork to show, telling her that one day it will be in a museum, ‘WHEN I AM A FAMOUS ARTIST.’”

“Kids experience so much grown-up stuff,” says Steptoe, who discloses a family history of mental illness in an author’s note. He hopes Radiant Child will inspire readers to begin conversations about challenging issues and concepts. “We want to give them books with perfect worlds, but that gives no room for them to talk about what they’re going through that’s not perfect, and wrapped up in 32 pages.”