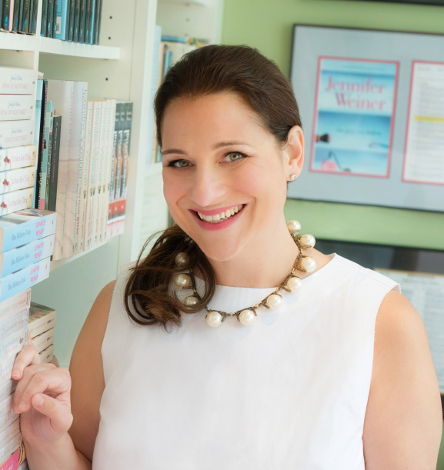 These days, Jennifer Weiner seems to be known more for the rage she induces in authors, critics and readers of literary fiction; for her strong opinions about book critics and their focus on white, male authors; and for her tweets about The Bachelor and The Bachelorette than she is for her 11 successful novels.

Maybe that’s the result of author and media jealousy. Weiner’s books have spent nearly five years on the best-seller lists, her novel Good in Bed is in its 57th printing and she has nearly 90,000 Twitter followers, compared to celebrated literary novelist Jonathan Franzen’s 1,241, who, by the way, is one of Weiner’s harshest critics.

But it’s Weiner’s writing, her plots, her characters (some critics say unlikeable characters, while her fans say relatable characters), and their humorous dialogue that keep readers buying her novels. Indeed, there are 11 million copies of Weiner novels in print, according to her publisher.

So out of respect for Weiner and her fans, I choose to focus not on the many Weiner controversies, but on her newest novel, All Fall Down, the story of Allison Weiss, a woman who seems to have it all—a handsome husband, a beautiful daughter, a stunning house in the suburbs, a fabulous career that she fell into and a prescription pill addiction.

Then again, Weiner has stated publicly that her novels are semi-autobiographical and since her apparent alter ego in All Fall Down is an addict, I have to ask about the autobiographical segments in the book. After all, I’m a reporter who self-professes to write journalism with an edge, so I want—no, I need—an edgy confession.

So what does Weiner say when I ask her about the autobiographical elements of All Fall Down?

That hesitation. That stuttering. I think—I hope—I’m about to actually get the big confession.

Come on, Jennifer. Admit it. I know you said on your website that when Best Friends Forever got rave reviews from NPR and USA Today and debuted at number one on the New York Times best-seller list, that you yelled, “ ‘Suck it, James Patterson!’ from the depths of a hot tub while brandishing a bottle of Champagne” until your then six-year-old took the bottle away from you.

“I wanted to use addiction as a specific way to talk about a general problem that so many women, I think, are struggling with, which is you’ve got the life that you thought you wanted and it doesn’t feel like you thought it was going to feel,” she continues. “And I think that so many women grapple with a version of that and whether they drink or they take pills, whether they’re taking five spinning classes a day, whatever is going on in their lives, I feel that idea of ‘This is what I thought I wanted and I got it now and it doesn’t feel the way I thought it would,’ I’m hoping, I’m hoping that’s something that a lot of women are going to identify with.”

“If you aren’t that woman yourself,” she adds, “you certainly know her—that woman who…it all looks great from the outside and then you start scratching the surface and it’s not so great.”

I’ve got to scratch deeper. “So is that how your life is?”

“No.” She laughs. “My life is actually pretty wonderful, I have to say. But I went through a divorce, which was hard, and was certainly something that I never, ever wanted.”

And she’s hard to crack. I’ve got to be even more direct, so I straight out ask her about the Patterson line, the champagne, and her daughter taking it away from her.

“No,” she laughs again, “that was a joke. That never actually happened.”

“What?” I yell, in (mock) disappointment.

“You know, I might have some raw material that I’ve lent to the DNA,” Weiner later says about All Fall Down, “but in terms of the actual voice and the actual plot, it’s very much a created thing as opposed to just transcribed.”

Obviously, there’s no juicy confession to be had, and that’s made triply obvious when she tells me her research for the novel consisted of talking to a lot of people; reading memoirs, websites and blogs about addiction and recovery; and reading the book Inside Rehab: The Surprising Truth About Addiction Treatment – And How to Get Help that Works by Anne M. Fletcher.

But putting all of Weiner’s and my joking aside, there is a very important point to our conversation: “It was really, really interesting having immersed myself in that world [of addiction],” she says, “and then watching things like Philip Seymour Hoffman’s death or Cory Monteith’s death, where both of those men had been in treatment and came out of treatment and overdosed and died. And watching people’s responses—‘If you’re in trouble, go get help, everybody needs to be aware that you can go get help, there’s people that can help you, you just need to talk about it.’ And I’m thinking, ‘These guys got help, and the help didn’t help them.’ So maybe there’s another conversation that we need to have about what kind of help we’re giving people and why it’s not working, why it’s not sticking, why there are people coming out of rehab when you think they’d be all cleaned up and spiffed up and ready to go but they’re still struggling.”

And that is the important confession. One on which authors, critics and fans can agree.

Suzy Spencer is the author of the oh-so-edgy Secret Sex Lives: A Year on the Fringes of American Sexuality and the New York Times bestselling true crime Wasted, a story of addiction.