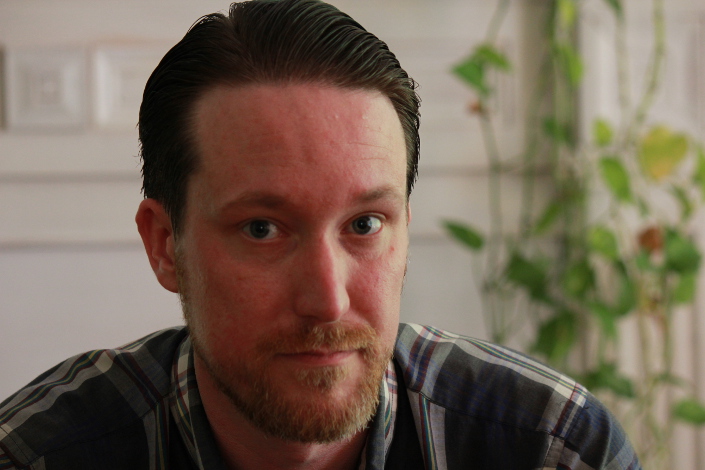 Jeremy Hawkins’ debut novel, The Last Days of Video, centers on an indie video rental store in the fictional college town of Appleton, North Carolina and the misadventures of three of its employees—Waring, the store’s grouch of an owner, Alaura, the cute-with-an-edge manager, and Jeff, the college freshman new guy—as they try to stave off the store’s looming demise. It’s 2007, and a new Blockbuster has just opened up down the street, perhaps the next biggest threat to business after Waring’s alcohol-fueled rants at customers for their poor taste in movies.

Waring, Alaura and Jeff form a sort of ragtag family. At times they treat each other badly (well, it’s mostly Waring), but they come together at Star Video, and they keep coming back. “The three main characters are all versions of myself,” Hawkins says. “Jeff is the slightly more neurotic version of me when I was 18. Waring is the angry voice in my head. I think we’ve all got that voice—we just tamp it down. Weirdly, I think that Alaura is the character most like me. She looks at the world similarly to the way I do.”

Hawkins’ extra-large characters come out on top of his story—sometimes their mishaps cause you to chuckle, and sometimes their overwhelming love of film causes you to reminisce about the wonders of the silver screen. Waring may be less than lovable, but he is worth rooting for, and Alaura and Jeff are there in the fray with him. They’ve mostly got each other’s backs. “It’s not just a farce. It’s not just silly,” Hawkins says. “It’s attached to something a little bit deeper. Like movies that make you laugh as they pull at your heart strings.”

Hawkins worked for nearly 10 years at a family-owned video rental store in Chapel Hill and Durham, North Carolina, borrowed for much of the setting of The Last Days of Video. “The video store that’s in the book is almost exactly like the video store where I worked, all the way down to the dust bunnies in between the shelves,” he says. But beyond the setting, the video store job may not have been much inspiration for the novel—and it might in fact be the other way around: “Growing up, going to video stores and renting movies, being a total cinephile geek, I knew from the very beginning that I was eventually going to write something set at a video store. I think it was part of the reason I wanted to get a job there,” Hawkins says.

The comic misbehavior of Waring and the other employees’ antics is tempered by our double knowledge that not only is Star Video about to go belly up, but also that Blockbuster, the thing that would finally destroy it, is itself not long for this world. “I think that’s why there are characters in the book like Alaura, who’s really great with customers, and then there’s Waring,” who’s really bad, and none of it really matters,” Hawkins says. “The industry was just going away, and now it seems completely inevitable. We didn’t know that at the time.”

“For many years, Blockbuster was the big bad guy, in the way that Amazon is the big bad guy for bookstores now,” Hawkins says. Technologies change, and businesses rise and fall with those changes, sometimes in the blink of an eye. But not always; or at least, in some cases, not yet. Hawkins now works as a bookseller at Flyleaf Books in Chapel Hill. “It’s one of our great indie bookstores in North Carolina,” he says. “We have quite a few.”

Walter Heymann is a freelance writer and screenwriter who lives in Los Angeles.