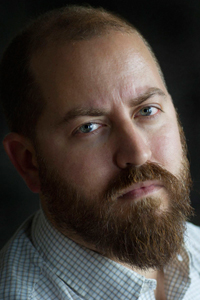 “You’re guaranteed to get some response from saying ‘racial reassignment surgery,’ ” says Jess Row, author of the debut novel on the subject, Your Face in Mine. The concept, which was snapped up by Riverhead Books before the manuscript was finished, remains the ultimate conversation starter at cocktail parties.

“Some people say, ‘Oh, racial reassignment surgery, that’s so interesting!’ ‘I’ve thought about that before,’ or ‘That makes such sense.’ Other people sort of give me a baffled look, then I explain the whole story.”

“It doesn’t seem possible, even now, that it could begin the way it begins, in the blank light of a Sunday afternoon in February, crossing the parking lot at the Mondawmin Mall on the way to Lee’s Asian Grocery, my jacket in my hand, because it’s warm, the sudden, bleary, half-withheld breath of spring one gets in late winter in Baltimore, and a black man comes from the opposite direction, alone, my age or younger, still bundled in a black lambswool coat with the hood up, and as he draws nearer I feel an unmistakable shock of recognition,” Row writes.

The man is Martin Wilkinson. He and Kelly attended the same tony prep school and even jammed together in a garage band called L’Arc-en-Ciel. But back then the last name was Lipkin, and Martin was most definitely white.

“You know, he says. You’re a brave man, Kelly. I think I’d have run away screaming. His voice is different. It is, thoroughly, unmistakably, a black man’s voice, declarative, deep, warm, with a faint twang in the nasal consonants. It’s just a couple of operations, he says. And some skin treatments. In the right hands, no big thing at all. That is to say, it won’t be. When it becomes more common,” Row writes.

Row (rhymes with wow) grew up, in part, in Baltimore, where he attended the progressive Park School. After graduating from Yale, he moved to Hong Kong to teach English, returning after two years to earn an MFA at the University of Michigan. He is a recipient of the Whiting Writers’ Award, a Pushcart Prize and a National Endowment for the Arts fellowship, and is an associate professor of English at the College of New Jersey.

While the subject matter of Your Face in Mine might be provocative in any hands, Row, as a white male writer, faced particular concerns in bringing the story to life.

over and over again—not only being told but having sort of internalizing? the supposition?—that white writers aren’t supposed to write about race,” he says.

Your Face in Mine is a testament to Row’s successful confrontation of those fears, and he encourages others to similar ends.

“I think that it’s as important for white writers to write about race as anyone. Race affects white people, as it affects people of color—in perhaps more subtle ways, but that doesn't mean it isn’t interesting, important and vital subject matter,” he says. “Race is one of the essential conflicts or tensions, an aspect of being in the world that we all contend with, whether we want to put it in the foreground of our thinking or not, and I don’t think that there ought to be any special burden placed on people of color to address it.”