A Family of Holocaust Survivors Kept a Lifelong Secret 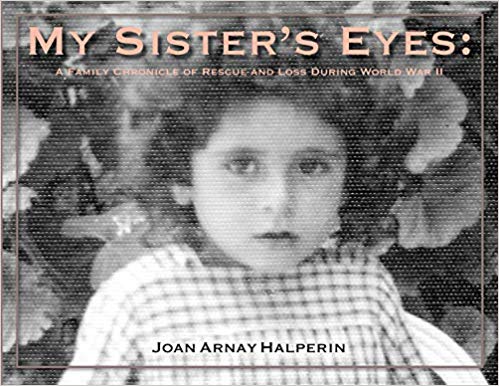 In My Sister’s Eyes, debut author Joan Arnay Halperin recounts traveling to Jamaica in 2014 to visit a child-sized cemetery plot. The headstone commemorated her older sister, Yvonne Krakowiak, about whom the family never spoke. Halperin doesn’t fault her mother for not talking about Yvonne. “My mother raised me to be a happy child,” Halperin says. “I was a happy child….When I found out the truth, especially that I was no longer the oldest child but the middle child, that threw me for a loop. I got over it. Maybe.”

The memoir charts how Halperin’s family escaped Europe during World War II, fleeing Belgium for France, Portugal, and Jamaica until finally settling in the U.S. Like many refugees, Halperin’s parents stayed silent about the trauma of their past, including the loss of their firstborn daughter. My Sister’s Eyes follows Halperin’s discovery of her family’s history.

Kirkus calls My Sister’s Eyes “a full-color journey of terror, hope, and loss, using family photographs, letters, and legal documents.” The collected materials animate a resourceful family fleeing tragedy, and the author’s firsthand experiences depict how the pain of the past directly impacts future generations.

It was during a chance encounter at Bear Mountain State Park in New York in 1956 that Halperin learned that her family was hiding something. A stranger approached Halperin, then just 11, asking the girl to take him to meet her father, Ignas. The Polish refugee knew Ignas when they were children in Warsaw. The last time the pair spoke was during their time in Portugal, having both fled Nazi-occupied Europe. The encounter led Halperin’s mother, Hala, to tell her that she “had her sister’s eyes.”

She tried to wrap her arm around my shoulder, but I pulled away and stared at her. When I found my voice, out poured more questions. “What do you mean? What sister? What are you saying?” Mom looked past me, her gaze seeming to traverse space and time.

“We didn’t speak much about it after that point,” Halperin recalls about her mother. “She said, ‘No, I can’t speak about it’ and life just went on. Subconsciously, it may have affected me, but on the surface level, things moved as though nothing ever happened.”The author eventually learned that Yvonne had died in Jamaica following a bicycle accident.

Halperin didn’t spend much time thinking about her deceased sister. The idea for My Sister’s Eyes came over time spent on pilgrimages of her own. “My professional career started in 1968. After graduating from college, I spent nine months gallivanting through Europe, three of those months in France as an au pair. I lived in Israel for three years, met my future husband, and finally finished my master’s degree as a teacher of English as a second language.”

Her travels took her to Poland, where she collected money owed to her mother for a plot of land belonging to Hala’s grandfather. Having recovered an international debt, Halperin hoped her mother might feel moved to share the details of Yvonne’s life. Hala remained silent, but she did pass on all she had left of her deceased daughter. “She gave me a slim vinyl album with all the photos of Yvonne, including the final photo of her grave in Jamaica,” says Halperin.

This flood of new information came with more frustration, however. The documents and letters were in Polish, and Hala wouldn’t translate them. Ultimately, Halperin asked a Polish cleaning woman to translate the portfolio.

Halperin’s research continued with a simple internet search. “I literally went online and searched ‘Portugal refugees’ and ‘1940,’ ” Halperin laughs. “That brought me to the Sousa Mendes Foundation website. The man who saved my family and thousands of other[s],” recounts Halperin, “was the Portuguese Consul General Aristides de Sousa Mendes.”

Sousa Mendes found himself confronted in 1940 with thousands of refugees outside the Portuguese consulate attempting to escape the Nazis. He was able to coordinate the rescue of many, going against the wishes of his own government.

Halperin now works as the Director of Educational Initiatives for the Sousa Mendes Foundation, training teachers on the best practices for explaining the Holocaust to young students.

To understand the secrets kept by the author’s parents, Halperin feels readers must realize the horrific journey and years of wandering endured by the refugees. “There were two different kinds of survivors,” Halperin clarifies, “those who survived the camps and the obscene treatment and those who were able to escape. My mother never thought of herself as a Holocaust survivor. She considered herself a refugee. All my mother’s friends were the ones who escaped. She had no friends from her life before because none of those people survived.”

Halperin is convinced her mother would have taken the secret of Yvonne to her grave if it weren’t for that chance encounter at Bear Mountain in 1956, but she’s thankful it happened. “I can’t say for sure how I would have felt if the truth came out after my parents passed away. I don’t think my mother would have told me. Ever.”

Chris Illuminati is the author of five books, countless articles, and hundreds of Post-it notes about parenting.