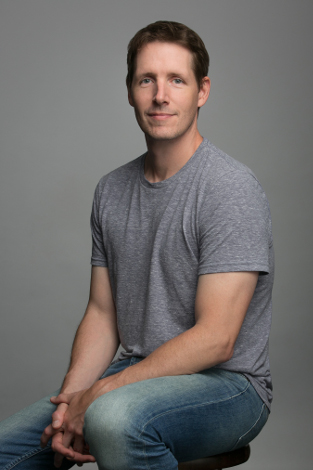 Here is a partial list of the terrifying things in Carousel Court, Joe McGinniss Jr.’s highly anticipated second novel: an upside down mortgage, car accidents, a man in a tent with a shotgun, a creature that’s probably a mountain lion, marriage, home invasions, a man burning furniture in a swimming pool, parenthood, abandoned homes, a wasp nest, addiction, love, and several gun-toting psychos.

Despite the constant threat of menace and financial ruin, McGinniss thinks his novel is more than a master class in rising tension. “It is, hopefully, a soulful story about a marriage,” McGinniss says.

The follow-up to The Delivery Man, a New York Times Editor’s Choice from 2008, Carousel Court is set in the teeth of the financial crisis in a distant suburb of Los Angeles that has been nearly emptied by foreclosures, the threat of wildfires, and abandonment. McGinniss began writing the novel just before the housing market collapse, but the aftermath of the crisis sharpened his vision.

“It was riveting to watch these L.A news reports on foreclosed neighborhoods,” McGinniss says. “I finally reached out to a family that lived in Lake Elsinore and they talked about their neighbors being gone and dark, abandoned houses. That’s insanely terrifying.”

While McGinniss keeps the novel focused on the disintegrating marriage of Nick and Phoebe Maguire and the plummeting equity of their “McMansion” on Carousel Court, he enjoyed having a nearly apocalyptic background for the novel. “I was excited. I knew it was going to be tense. That’s fun,” McGinniss says. “It makes me want to turn the page and read through my fingers.”

What makes the reader turn the pages of Carousel Court isn’t the tragedy that befalls Nick and Phoebe—it’s the threat of tragedy. The couple and their toddler are skating on the edge of a razor blade and the reader is hooked by their struggle to put their lives back together. Phoebe is barely holding onto her job as a pharmaceutical rep and becomes increasingly dependent on a menagerie of pills. Nick lost the job he moved his family to California for and now works overnight on a crew that empties foreclosed homes. Neither are enjoying their life and expected much more.

Their potential refuge, the home they designed themselves down to the double staircase and indoor rock climbing wall, is fast becoming a stone around their necks. “They’ll kill each other. [Nick] realizes this,” McGinniss writes. “He used to see the stories, familiar cable news fillers about middle-class people stabbing each other to death, blunt objects, making up elaborate stories about home invasions or abductions when the body was actually rolled up in an Oriental rug and dumped in a nearby ravine or pond.”

Nick and Phoebe thought the house would save their marriage and give them financial security. So they try to strike it rich by building and flipping a house at the worst time in the past 70 years. The tension between Nick and Phoebe turns into outright aggression as their world spirals out of control, and McGinniss thinks their fate reflects something important and scary about America. Nick and Phoebe are “a young couple who are not exceeding or meeting their expectations in terms of how they saw their lives playing out,” McGinniss says.

In Carousel Court, a happy marriage is the sacrifice made to our obsession with homeownership and status. “In America you have to make it happen. If you’re not making it happen for yourself by the time you’re in your 30s then you’re not the winner,” McGinniss says. “Then, when you’re married, you’re looking at each other like ‘Why didn’t you do it? You were supposed to do it!’ Things can get ugly.”

Watching things get ugly for Nick and Phoebe is riveting for the reader and McGinniss’ second novel is more than worth the wait. Not that McGinniss always knew it would turn out this way. Starting a second novel after the success and acclaim of The Delivery Man was difficult. “I was panicked. I was sure I couldn’t do it again,” McGinniss says. “It’s terrifying. I’m terrified now of what I’m going to do with the next story that I have,” McGinniss says with a laugh.

Despite the fear and panic, McGinniss is hard at work on a novel set in an East Coast neighborhood with several overlapping races, classes, and religions. McGinniss wouldn’t reveal too many plot details, but the novel is set amongst the upper class but is told through the perspective of an immigrant woman who was a soldier in Eritrea.

McGinniss is poised to become one of our sharpest observers of life in America at the start of the 21st century, and Carousel Court might compel you to reexamine your own motives for buying a house. And just in case you were wondering: McGinniss and his wife used to own, but now they’re renting.

Richard Z. Santos is a writer and teacher living in Austin. His work has appeared in the Morning News, the Rumpus, the San Antonio Express News, Cosmonauts Avenue, and many others. He is working on a novel.