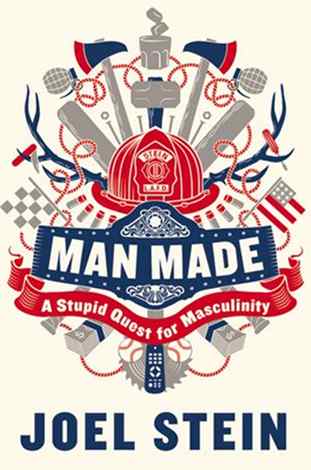 He’s been punched, kicked and shot at, but TIME Magazine columnist and admittedly unmanly man Joel Stein may finally be ready to conduct a convincing game of catch with his 3-year-old son Laszlo when the time comes.

At least that’s the hope. Until Laszlo, the comfortably urbane writer was quite happy not fixing things around the house, racing fast cars or engaging in any other macho activity normally associated with red-blooded American males. Stein has since done all these things and more in solid preparation for future father/son outings, as well as his forthcoming first book, Man Made: A Stupid Quest for Masculinity.

Read more new and notable nonfiction books this May.

Here Stein talks about what it was like trying to become a “real man” for his son, and the distinct possibility that young Laszlo might yet grow up wanting to whip his dad’s butt one day.

Have you had the opportunity to put any of your freshly acquired man skills into practice?

Well, we were at this street fair last week where they had a Muay Thai kickboxing ring. And I did this horrible thing. We had to walk by it. But I kind of walked with Laszlo facing the other way so he wouldn’t see it. Which is everything my book told me not to do. I was like, “I don’t want him to see all this violence.” So it’s hard to fight my instincts.

I should probably have him in a kickboxing class by now. He’s kind of a wimpy, clingy kid—because he has my genes. I’ve seen it on the playground. He gets pushed around. He doesn’t do much pushing. But he’s very into cars and trucks. And every time we take him to the doctor, they say he has an ear infection. But he’s never complained about it, so I think he’s a tough guy as far as not whining about his pain.

Can you gauge the state of masculinity in the United States today?

I think we’re in bad shape. Which isn’t something I thought I would care about. But now I do. All of the traditional American man stuff—which is some version

of Scotch-Irish-Southern-ness—like hunting, is down. Fishing is way down. Boy Scout enrollment is way down. I think this has less to do with social changes or feminism than it does with technology. It’s just that we don’t have to do this stuff anymore.

I think every generation gets wimpier. When I watch Mad Men, I think, that guy’s a man. He just says, “No.” He doesn’t even explain why. But then, when they show clips of Don Draper’s dad during the Depression, he’s always dirty and coming back from the mines. That guy’s a real man. They get manlier and manlier the further we go back to caveman times.

What’s the fallout from all that?

I think there’s a code to being a man that we lost a little bit. That has to do with loyalty and dignity and humility and not seeking attention. Some of the best Roman values I feel are getting lost. That’s what I wound up appreciating. Just “self-reliance” and all of these words that I think were just words to me before I did this book. Now they make more sense having done some of this stuff.

I grew up in the ’70s in the “Free to Be You And Me” era. But then you have a boy. And even if you have a wimpy boy like I do, you see just how different they are from girls. It’s just freaky. And it doesn’t change.

Having a son compelled you to fire a tank cannon. How do you think you’ll react to a daughter?

I think in some ways that would be easier for me. It’s a different set of challenges. But also I think I’d want to introduce my daughter to all of this stuff, too. I’d want her to do some sports. And I’d want her to go camping with her. So these aren’t skills I will have wasted if I had a daughter.

Your thoughts on “experiencial journalism” and would you ever do it again?

I don’t know. It’s one of the things I do. I enjoy it just because it’s how I learn the best. If I just talk to people about their lives, I learn, but if I actually do what they do I learn more. Sometimes I do this stuff for stories, and it doesn’t even work its way into the piece. It’s the only way I can figure stuff out.

I spent time with a chef, Grant Achatz, to do a profile of him. So he let me work in his kitchen for a night. Now that really didn’t work its way into the story, but I feel that I understood his life better than if I had just talked to him about working in his kitchen.

What do you think Laszlo reaction to this book might be?

By the time he’s old enough to read it, hopefully, I’ll have done some of this stuff with him. And even if he doesn’t like it, I think it’s good to be able to say, “Oh, I did go camping. I did try mixed martial arts.” You can only push a kid so much. If he doesn’t want to do that stuff then I’m not going to force him. But I’ll at least have exposed him to it. Hopefully, he doesn’t really take up mixed martial arts and just kick my ass by then.