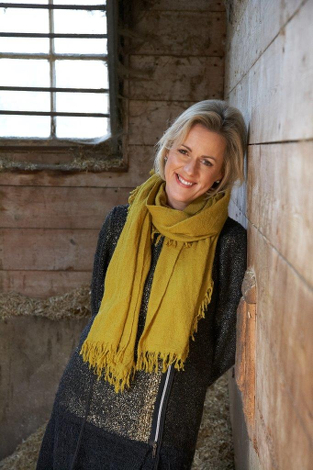 “My dad is such an arsehole.”

That’s Chapter 5—in its entirety—of British romantic novelist Jojo Moyes’ latest book, One Plus One.

It’s also a standout chapter, as those six words are able to convey their speaker’s personality and a bit of his motivation. After all, Nicky is a mascara-wearing, pot-smoking 16-year-old who’s been abandoned by his deadbeat dad, Marty, and taken in by his stepmother, Jess.

Jess is a struggling young mum, who cleans houses in the daytime and slaps away groping hands at night as she works in a pub to support Nicky, her 10-year-old math whiz daughter, Tanzie, and their slobbering dog, Norman, who just happens to be many readers’ favorite character: “Mum said Norman was basically an enormous eating and crapping machine. He drooled on cushions and howled in his sleep, plodded around the house shedding hair and leaving evil smells behind him.”

In fact, when Moyes mentions that One Plus One went straight to No. 1 on the British best-seller list, she attributes that to Norman, first, and then to Jess. “I think mothers often get quite a raw deal in fiction,” Moyes says. She explains that mothers usually come off as irritating and difficult, and rarely positive and heroic. “And yet when I look around me in real life I see them being exactly that”— positive and heroic. “So I’ve had a really good response from mums, predictably, and a lot of single parents who just like the fact that Jess is not a feckless, benefits-grubbing, stereotypical single mother.”

Writing stereotypical characters is not what Moyes does. Take 10-year-old Tanzie, for instance. She’s an eyeglasses-wearing, geeky little girl who’d rather spend her time calculating incomprehensible math problems than dressing dolls with playmates. “I like kids who possibly don’t fit in,” says Moyes. “And I wanted her to be unapologetically passionate about numbers.”

It’s Tanzie’s love of numbers that drives the plot of One Plus One. Her math skills earn her the opportunity to attend a high-priced private school, which struggling Jess can’t afford. But if Jess can get Tanzie to Scotland for a math competition that could earn her £5,000, then Tanzie might just receive the quality education and future about which Jess can only dream.

So Jess piles Tanzie, Nicky and Norman into an uninsured, unregistered, and probably unsafe Rolls Royce and they head off to Scotland. Shortly after departing, police pull over the Rolls, and Nicky says, “I guess this isn’t the time to tell you I brought my stash with me.”

They’re rescued, though, by high-tech millionaire entrepreneur Ed Nicholls. Jess knows Ed because she’s cleaned his vacation home; he treated her as inconsequential then. Later, she politely got him in a taxi after he drank too much at her pub. But Jess doesn’t know the reason why Ed got drunk—he’s being investigated for insider trading.

Once again, Moyes wanted Ed to be far from the stereotypical male lead of romantic fiction. Like Tanzie, Ed is geeky. But unlike Tanzie, he has no concept of what it’s like to struggle financially. And unlike Jess, he doesn’t have a lot of common sense. He certainly isn’t thinking rationally when he offers to drive Jess, Tanzie, Nicky and Norman to Scotland in his pristine Audi.

But off they go on a trip filled with laughter, heartbreak, dog odors and, of course, romance. This might sound like a simplistic storyline, but One Plus One is far from it. It involves a multitude of topics that are ripe for book club and teen discussion, including bullying, teenage pregnancy, single motherhood, the widening gap between rich and poor, the importance of quality education and also of withholding judgment, especially as people make mistakes and work to overcome them.

“I suppose it’s only easy to see life in black and white if you’ve never had to deal with anything,” says Moyes. “[For] most of us, our lives are full of weird gray areas, and we just try to negotiate them the best we can.”

That’s what Jess is doing. And her kids appreciate it. After all, Nicky never said that his mum was an arsehole.

Suzy Spencer is the author of Secret Sex Lives: A Year on the Fringes of American Sexuality.