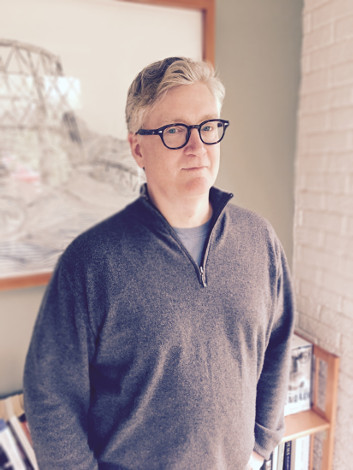 Jonathan Dee’s latest, an exquisitely nuanced drama of simmering small-town politics, is so prescient—so uncannily current—it’s a source of concern. “I worry a little bit the novel is close enough to current events that people are going to read it a little too much as if it were a key to current events,” Dee says.

But if The Locals isn’t meant to explain the Trump era—“if I’d seen any of this coming,” Dee tells me, “I’d be in a different line of work”—it does help illuminate it. When he started the novel back in 2013—before, it’s worth noting, Donald Trump had even announced his candidacy—Dee was intrigued by the “mainstreaming of the idea that there should be no safety net,” he says. “That kind of institutionalization of savagery just seemed so weird to me.” Also, he had an idea for a formal experiment, having to do with an unexpected prologue: “Have you ever seen the movie 2001: A Space Odyssey?” he asks. “One of the things I’ve always loved about that movie is the really bizarre opening section.” And also, he knew about some people, New Yorkers, who’d started living in their rural summer house full-time after 9/11, because they’d gotten a tip there’d be more attacks, which seemed interesting, too.

That’s the way it happens, Dee says. “You have all these things bouncing around that you think are ideas for three different projects, and then at a certain point, you realize there's a reason you're thinking of them all at the same time.” That reason became The Locals.

Set in the small Berkshire town of Howland, Massachusetts not long after 9/11—a white, working-class town, the kind of place that might qualify, if Dee were into easy categories, which he isn’t, as “the Real America”—the novel centers around the anxieties of the Firth siblings, who, like the rest of Howland, are facing a future that looks increasingly grim. Mark, a general contractor, has recently lost his savings to a scam financial advisor; his realtor brother, Gerry, is fired from his job at Century 21 for a sexual indiscretion. (A while longer, and their sister Candace, vice principle of the elementary school, will find her job, too, on thin ice.) Between the general post-9/11 economy and the local housing market, the town itself is struggling, sustained by “summer money”—money that comes in from weekenders and part-time residents. Money, in short, that comes from people like Philip Hadi, a New York City hedge funder who brings his family to live in Howland full-time on a top-secret security tip and quietly begins reshaping the town. His philosophy: strip the city’s infrastructure bare—it’s all just bureaucratic bloat, anyway—and fund the rest from his own pockets.

It’s a world Dee knows well. He grew up in Northwest Connecticut, just over the border from Western Mass, a year-round local in the kind of

summer town that “both depends on and sort of resents” its part-time residents: the summer people, the people like Philip Hadi. He understood the landscape. What he wanted to understand, though, was the political moment: the impulse to repeal the social safety net; the notion that money—a lot of money, Bloomberg or Perot-level money—confers moral authority. The beliefs and principles of people like Gerry Firth, who feel threatened by “phantoms,” despite the fact, or because of the fact, they never actually encounter them.

“I feel the most engaged writing the characters that are furthest from me,” says Dee. “The effort to make Gerry in particular stay sympathetic, it awakens a kind of empathy in me that my real life—even just reading the paper—might not necessarily awaken,” he says. “Not because there’s anything saintly about novel writing or anything like that,” Dee clarifies. “It all grows out of the categorical imperative to just tell a story about people and not be boring.” The problem with judgment isn’t necessarily that it’s bad; it’s just that it’s narratively dull. And The Locals—unsparingly human, though never unkind—is anything but.