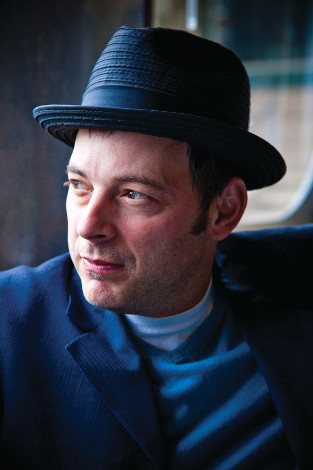 Novelist Jonathan Evison knows something about life in the margins. The Seattle native spent his teenage years in the local punk scene, playing in a band called the March of Crimes. In his twenties and thirties he worked a string of truly odd jobs: digging ditches for a landscaper, hacking road kill for a wildlife refuge, hawking sunglasses over the telephone (“the challenge was that I could only describe what they looked like”), and taking care of a disabled boy, an experience that inspired his critically acclaimed third novel The Revised Fundamentals of Caregiving, a soon-to-be-released movie staring Paul Rudd. For a man trying to pay rent, these jobs were a dead-end. For a writer mining for material, they were pure gold.

“My characters are usually marginalized by society in some way,” says Evison, whose own reputation as a writer has moved from the margins to the mainstream. His eagerly anticipated new book, This Is Your Life, Harriet Chance!, features a spry, spunky 78-year-old woman (Ms. Chance) setting sail on an Alaskan cruise in the wake of her husband’s death. With the unlikely appearance of her estranged daughter, the unlikelier appearance of her dead husband and unwelcome company of a big Kentucky redneck in a “Look Don’t Touch” T-shirt, Harriet’s sailing isn’t smooth, but for readers it’s a great ride.

“I’ve always been interested in old people as characters,” says Evison, who once lived in a motor home park full of senior citizens. “The whole place was 80-year-old women. Who is more marginalized in our culture than elderly women? Nobody really pays any attention to them except the medical industry,” he says. “What always impressed me was watching so many of them reinvent themselves after their husbands passed away.”

‘Reinvention’ isn’t a word often applied to 78-year-olds, yet Evison devotes an entire novel to the idea that even a near octogenarian can have a fresh start. It’s a deeply empathetic (yet firmly unsentimental) perspective, one that Evison attributes to his wide range of life experience and the people he’s met along the way. Unlike many writers whose pathway to publication cleaves to the classrooms and cliques of insular MFA programs, Evison has been out in the world and gotten his hands dirty. “You have to be open to life,” he says. “You have to be open to live.”

Over the next three months, living, for Evison, will revolve around a nonstop publicity tour to promote Harriet Chance. Evison is a darling of the independent bookstore circuit, beloved not just for his books but for his readings, which are famously raucous and boozy. “I’m always inebriated. I don’t even take the podium until I’ve had three beers,” says the author, who admits that things are a bit different now that he has kids. “When I was younger, touring was easier. I got my hotel, got my lotion, got the bar down the street. I was fine. With little kids at home, it’s harder.”

Still it’s an obligation he feels fortunate to fulfill. “I’m one of 100 people who gets to make a living writing books, who gets to support his family doing it,” says Evison, who just finished his next novel. “These independent booksellers have helped me so much; this is the least I can do.”

Kirk Reed Forrester is a writer and editor based in Birmingham, Alabama.