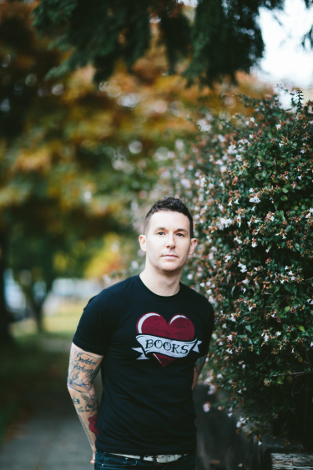 “I wonder if this book emits its own hiss. What happens when you hold it to your ear?” Joshua Mohr asks in his new memoir, Sirens. “Can you make out my scorched music?”

When reading about a former alcoholic and junkie’s blackouts, cocaine binges, and repeated self-destruction, there’s a comfort to perceived distance. It’s easier to read this story believing addiction is bound to the page and the author’s past, that this follows a formula—the addict was bad, now they’re good; broken, now healed. This is not that kind of story. When Mohr directly addresses the reader, it’s purposefully arresting, dragging the audience into his world. “I wanted this to be a taut bullet of a book,” he says, “that for 180 pages was going to grab you by the throat and the heart.”

And Mohr’s writing is powerful enough that once it grabs hold, it doesn’t let go. Spanning his life in San Francisco from the 1990s to the present day, Sirens is a nonlinear collection of vignettes interlacing three narrative voices—Mohr as the author writing this book, Mohr in the present tense, and Mohr as the “caveman” addict. Constructing the book in this way, he explains, is inspired by his days as a musician. “I wanted there to be three notes of myself adding up to the book’s chord,” Mohr explains. “I wanted the three versions of myself swirling together in this chaotic structure for the reader to inhabit.”

To be immersed in the world Mohr creates is not just to inhabit seedy bars, but also to witness his unfiltered past constantly at odds with his present. What makes this so complicated, and so compelling, is that once Mohr realizes that the desire that drives addiction never leaves, he simply rearranges those desires. “To be a good junkie, it takes 18 hours a day—you’re trying to get drugs, you’re high, you’re recovering,” Mohr says. “I have that programming, and it will never go away. Now, instead of using it to debase myself, I use it to work on my craft.”

Mohr almost didn’t have the chance to reprogram. Hard living led to literal heartbreak, and by his mid-30s he’d suffered three strokes. The present-tense thread of the story revolves around him undergoing cardiac catheterization surgery to fix a dime-size hole in his heart. As Mohr began to research the surgery, he uncovered that its inventor, a German doctor named Werner Forssmann, won the Nobel Prize but was also a member of the Nazi Party. The dichotomy of Forssmann’s life resonated with Mohr, and the doctor (who died in 1979) becomes an unlikely confidant that Mohr talks with frequently in the story.

The addict’s past is not simply molted and left behind; it will always be a part of Mohr’s identity, but now he’s also a father, a husband, a

writer creating books potent enough to hiss. He’s also, like so many, relishing his second chance, questioning, embracing the present tense. “I don’t want to sound like I know an extraordinary amount about being alive now. I don’t,” Mohr says. “I’m still the same confused person I was before except my heart is fixed and I don’t do drugs. I’m still walking around squinting, bleary-eyed, trying to make sense of the confusing world that’s going on around us.”