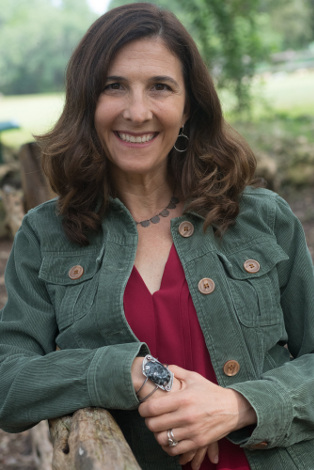 As an avid reader and aspiring author, Juli Berwald noted what sold when it came to nonfiction science books: authoritative, impersonal, exactly 10 chapters, and typically written by men.

“I would read those books and say to myself, ‘I can’t write a book like this,’ ” says Berwald, who holds a Ph.D. in ocean science from the University of Southern California and writes and edits textbooks, “and it would really bum me out, because I’m a science writer, but I just don’t have it in me to write that kind of book.

“One day, I changed the inflection,” she says. “I can’t write a book like this. I can write a book where I have some personal connection with my reader. Then I knew I would have to be part of the story.”

Fastidiously fact-checked physiological data may be the backbone of Spineless: The Science of Jellyfish and the Art of Growing a Spine, but it’s far from the heart. Berwald’s intriguing and beautiful book (illustrated by Rachel Ivanyi) boasts a tentacular narrative: science writing, memoir, history, and criticism entwined with a call to arms.

“This book is about three things,” says Berwald, whom Kirkus reached at home in Austin. “It’s about jellyfish and why they’re doing well—and how their spinelessness contributes to that—but it’s also about me growing my spine as a scientist-turned-writer and middle-aged woman trying to figure out who I am in this world. Lastly, it’s about our collective spinelessness, in that we’ve not set an intention toward protecting our oceans and recognizing how important they are in the life of the planet.”

Spineless is an innovative and bold offering from Berwald, who reports for publications including National Geographic and the New York Times.She began her investigation when jellyfish blooms, large populations forming single gooey masses, were making headlines for causing ecological and economic problems around the world. (They excel at stuffing up and shutting down power plant cooling apparatuses, for one.)

Where did they come from? What did they mean? Were they a marker of global warming’s aqueous counterpart, ocean acidification? There seemed to be no easy answers.

“Like their mythical namesakes,” Berwald writes of genus Chrysaora (named for Chrysaor the giant, son of Medusa and Poseidon), “jellyfish are also awash in misunderstanding. They have no centralized brain, but they see and feel and react to their environment in complex ways....They wash ashore in hordes and they dominate the deepest depths of our planet, supporting entire ecosystems. And still, scientists are unable to predict where and when to find them.”

Interest ignited, Berwald planned family vacations to marine destinations to coincide with interviews of jellyfish scientists, jellyfishers, and inventors (e.g., of anti-sting sunblocks, of pet jellyfish tanks). The big personalities she encounters in her travels—to Japan, in search of the giant jellyfish, to Spain, to attend the Fifth International Jellyfish Blooms Symposium in Barcelona—are as fascinating as their experiments in biomechanics, bioluminescence, and more.

As Kirkus writes in an enthusiastic review, Spineless is a “lucid, eye-opening book” and “lovely exploration of the mysterious jellyfish”

that will lead readers to think twice about these curious invertebrates that can help and harm.

“I hope readers will develop a little more of an appreciation for just how amazing jellyfish are,” says Berwald. “I hope they’ll be entertained and think about science as cool and interesting and applicable to their own lives. And I hope that some readers decide to pick up their pens and write to their Congress people to say the health of my planet matters to me.”