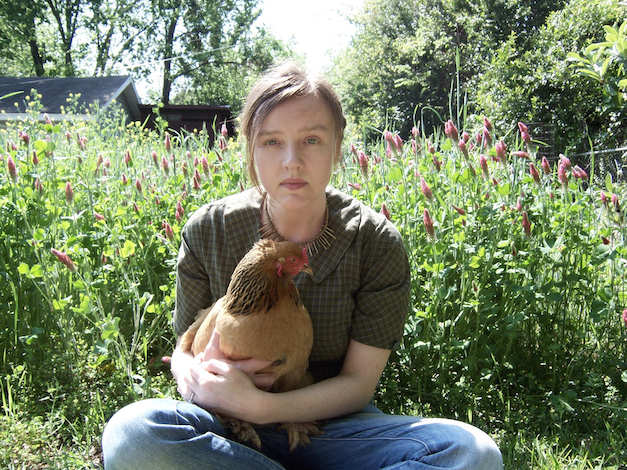 We live in a world in which the technological and the human increasingly merge, whether bioenhancements for athletic performance or high-tech replacements for worn body parts. We’re becoming baggy monsters, of a sort, 21st century Frankensteins.

Julia Elliott’s debut novel, The New and Improved Romie Futch, is its own baggy monster—with a literal biohazard monster, Hogzilla, at its carefully plotted core. But for all the postmodern genre-busting elements Elliott throws into her novel, at its center is the very real human heart of Romie Futch, a 21st century Everyman.

Romie’s life is a mess of debts and emotional losses, so he grasps for a chance to achieve the title’s promise: a new and improved life. That opportunity presents itself in serving as a test subject for top-secret neural enhancement downloads that give him a mental and conceptual capacity worthy of several doctoral programs in critical and aesthetic theory. “Romie is a small-town guy suddenly exposed to academese,” Elliott claims. What, then, in this brave new world, is this new American man? He’s an Amalga-Man.

Elliott makes use of (and calls into question) the increasingly complicated network and Faustian pact of Big Agriculture, Big Pharma, and Big Profits to suggest the potential for Mega Disaster. In addition, at a moment when reparations for excesses during previous human experiments is playing out, the particulars surrounding the New and Improved Romie suggest that scientific curiosity may still lack boundaries, may be as obsessive as any peg-legged Captain searching for a certain whiter shade of pale. But in Romie Futch, there’s no Romantic second guessing a la Victor Frankenstein: the scientists and profiteers of Elliott’s story keep carefully calibrated tabs on their creations.

For all the cybernetic and postmodern pyrotechnics and gloss, Elliott has employed an archetypal plot thread about a protagonist on a messianic quest for redemption: to win back his love and in rural South Carolina, to kill Hogzilla (a nemesis written, as Elliott suggests, as “a tongue-in-cheek” modern-day counterpart to Grendel or Moby Dick). It’s not giving away the plot to say that he succeeds only partially.

In his travails, Romie loses a (minor) appendage, suffers fools, and endures headaches that plague him as a result of the neurological downloads. Holograms and a computer of organic matter (whose image is also found in “The Love Machine,” a story in Elliott’s earlier collection, The Wilds) give a sci-fi cast to the novel’s atmosphere.

Romie’s quest actually trifurcates: beast, babe, and beauty (taxidermal dioramas that end up being shown in hip art galleries). The making of art, both high and low, twines with notions of identity, of finding one’s truest self—taking, as Elliott states, “personal agency” for his life and becoming “less accepting of the status quo” in a world of surveillance (even the voluntary participation in social media).

Elliott’s characters spout concepts from Derrida and Foucault, and the novel plays with themes of surveillance and incarceration. Given the recombinant creatures—squirrels and hogs and human—what is one’s truest self when we are so many parts of others? And the language that Romie acquires as part of the neural downloads expands his levels of understanding and consciousness. Who are we without a vocabulary and who do we become when we expand what we can say (and thereby think)? “Romie reinvigorates his life,” as Elliott observes. “He has improved on one level, but the basic Romie is still there.”

But underneath it all is a basic human principle, as fundamental to our drives and behaviors as any: love’s promise. Romie is hunting more than a genetic mutation in the wilds of South Carolina; he is also taking aim at those who have swept his ex-wife into bourgeois culture. And Romie is taking stock of himself: what he is willing to risk, what he wants from his life. Finding what it means to be fully human, even in a world of wetware and biological implants, even in a capitalistic society that commodifies every element it can. He finds, with certainty, that what the world needs, especially now, is connection.