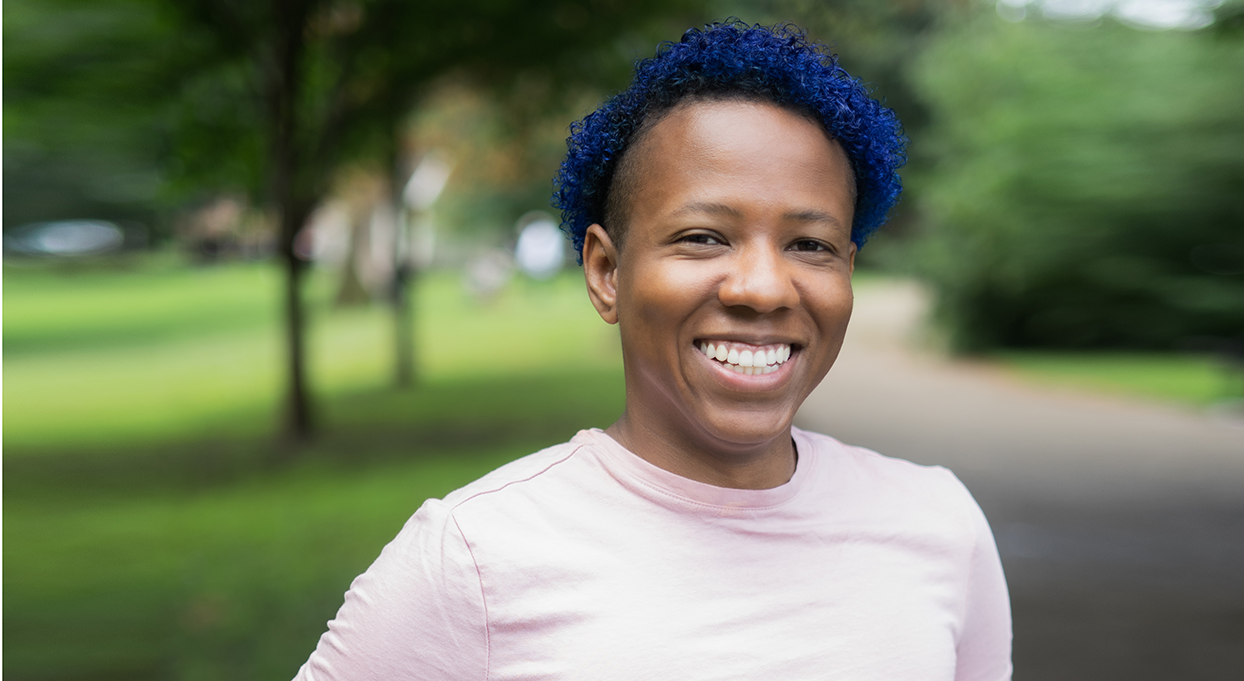 Kacen Callender’s new novel, King and the Dragonflies (Scholastic, Feb. 4), had a simple genesis: Over dinner, the author and their editor realized they couldn’t think of any middle-grade books with a gay black boy as the protagonist. So Callender resolved to write one. “I really wanted to tackle a lot of issues that black queer people experience when it comes to the intersection of having to deal with both racism and homophobia,” they say.

King and the Dragonflies is the story of Kingston “King” James, a middle schooler in rural Louisiana who is grappling with the death of his older brother, Khalid. King believes that Khalid isn’t really gone, he has just transformed into a dragonfly. In attempting to find his dragonfly brother, King runs into former friend Sandy. Back when Sandy came out to King, Khalid overheard and warned King to stay away lest others think he was gay, too (which, King is realizing, he might just be). Filled with guilt and shame over the episode, King helps Sandy as he tries to escape his abusive dad, but the situation rapidly spins out of control.

The novel has an air of magical realism, which Callender says reflects how they see the world. “A lot of what people might say is magical—and this is where it becomes potentially New Age–y—for me it’s actually kind of a reality,” they say. Case in point: They picked a dragonfly for Khalid’s new form simply because it felt right, only to later discover the insect traditionally symbolizes transformation, self-realization, and hope.

Despite its dreamy, lyrical quality, the novel deals candidly with real-world problems. Both King’s grief and his questions about his sexuality are complicated by the casual homophobia and toxic masculinity prevalent in his community. “I don’t think that it’s something that is too heavy or too scary for that age range because they are also dealing with it every day,” Callender says.

Visiting schools in support of a previous novel, Callender found that homophobia remains a powerful force in many kids’ lives. “I’m almost embarrassed to say that I really thought things were so much better than they are,” they reflect. Some students told Callender they wouldn’t read the author’s novels at home for fear of how parents would react to a book with a queer protagonist.

These are exactly the kinds of stories that inspire Callender to write. “That’s been my motivation for every book that I write,” they say, “wanting to create space and stories for myself for all those years that I really needed them—but also for all of the teens and young readers that I know are struggling with the same things right now. I want to let them know that they do matter and they do belong.”

Callender is a passionate advocate for greater diversity in publishing, but they note that simply welcoming new voices isn’t enough. Editors and readers (especially white ones) also need to cultivate a more broad-minded view of what makes a good book.

“I think that a lot of readers go into a book expecting that they will relate to the character and see that character reflect their own lives,” Callender says, “and when there is a moment when that character doesn’t reflect their life for the first time, it’s a shock.” That shock can lead readers to conclude that the book is bad rather than just unfamiliar. As someone who loves reading about people different from themselves, Callender finds this attitude hard to relate to, but it undeniably plays a role in shaping which kinds of books get published.

Callender hopes that more diverse writers and editors will encourage readers to embrace a wider range of viewpoints but maintains that there is one thing all children’s literature needs: hope. As many difficult topics as King and the Dragonflies tackles, its ending is an uplifting one. “When I was that age,” they say, “I really needed the books I was reading to reflect as much hope as possible because I hadn’t lived enough years to see the cycle of pain and struggle and then happiness and hope and then pain and struggle and then happiness and hope.”