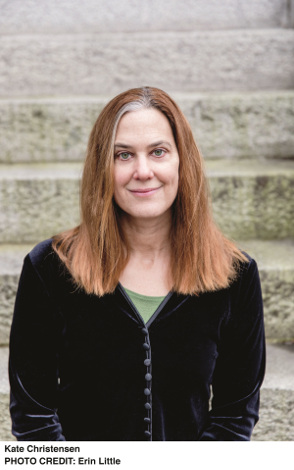 As the 2016 Presidential election unfolded, Kate Christensen shuttled between the old New Hampshire farmhouse where her husband was born and the couple’s home in Portland, Maine.

“I had a really bad feeling,” says the PEN/Faulkner award-winning novelist (The Great Man, 2008), who saw yard signs multiply like mushrooms on a rotten log. “Trump, Trump, Trump, Trump—it was like the Trump Corridor. And at the same time, I somehow got on every single save-the-environment email list, so every morning my spam is crammed with news of how the world is ending.”

The juxtaposition between American politics, worldwide environmental disaster, and Christensen’s happy home life in northeastern New England birthed her seventh novel, The Last Cruise, which Kirkus calls “an entertaining mashup of Ship of Fools and Titanic.” (Caveat lector—contrary to James Cameron’s romantic reimagining, it was a tragedy.)

“Mick had been told very little about this cruise,” Christensen writes, “but he knew that it was the Isabella’s last before she was retired: a two-week cross-Pacific jaunt that would take them to three ports of call in the Hawaiian Islands filled by a reverse trip back. The tone was meant to echo and imitate her first cruise in 1957: retro menu, classic cocktails, cabaret singers, jazz bands, string quartets, old movies, blackjack and baccarat in the casino. Everyone would be expected to dress for dinner. There was no Internet service, and no one under sixteen was permitted on board.”

Sounds like fun, right?—Hawaii-bound, nostalgia abounding. For Christine, traveling with her friend Valerie, a journalist investigating workers’ conditions on the ship, it’s an opportunity to sip martinis while she contemplates starting a family with her farmer husband. Miriam, for whom the voyage represents a professional swan song, may finally act on a titillating intra-quartet attraction. And impressing the cruise’s star chef may mean a plum job, on land, for Mick.

“I wanted the novel to be entertaining,” Christensen says. “I wanted to lift myself out of this despair and existential craziness and think of what we’ve done to the earth—that no one was talking about it. I wanted to write a book that allowed me to express all this in fiction, so it starts as, yes, here we go on a cruise.”

Undercurrents swiftly emerge, from the gross inequality among the ship’s billionaire owners, passengers, entertainment staff, and crew; to the evident pollution Christine encounters while swimming in the sea.

“She had seen so many online news stories,” she writes, “TV shows, documentaries that cataloged and exposed humanity’s unstoppable destruction of the oceans with images of vast gyres of trash, miles-long oil slicks, bleached and dying coral reefs, seabird stomachs full of deadly plastic, whales and dolphins entangled in fishing nets, algae blooms. She had absorbed all this information with a sense of helpless, grief-sickened rage. It reminded her of reading horror novels as a teenager, unable to look away, sucked in, a stifled scream in the pit of her stomach, eyes shocked wide.”

It’s the sinking feeling Christensen had seeing all those Trump signs, circa 2016, bestowed upon a character on a disaster-fated cruise. At best a joyful jolt to action, at least one hell of a ride, The Last Cruise is a gut-punch to be glad for—from an author who’s always considered herself a political writer “hiding behind social comedy.”

“There are a lot of us with this feeling in the pit of our stomachs,” Christensen says, “and writing this book was my way of taking action. Whatever effect it may have, it was all I felt I could do.

“I’m a writer and a novelist,” she says, “so I believe political fiction about people, about characters, is important right now. It’s what I want to read, and it’s what I want to write. I hope the small tribe of readers who will relate to this book will find it.”