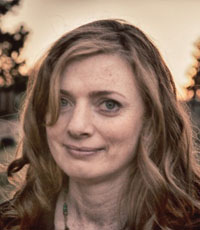 There are times when a novelist imagines a novel fully, making thoughtful decisions about what fictional characters will do, where they will live and how their hearts might be broken or saved. And then there are times when, despite a writer’s best efforts, a story wrests its way into being, reminding its creator that he or she has very little control at all. The story of how Katie Crouch, New York Times best-selling author of Girls in Trucks, wrote her new novel, Abroad, is one of the magic ones.

When Crouch headed to Italy for the summer with her partner, Peter Orner, and their infant daughter, Phoebe, she had a book all planned out. But as she wandered around Umbria, says Crouch, “with a baby on my hip,” she became fascinated by the history of the Etruscans, an advanced civilization that completely disappeared without a trace before the ancient Romans flourished.

Though Crouch had never written a historical novel, she began visiting Perugia, one of the main Etruscan cities (they most likely called it Persna), thinking she might give it a try. The family moved to Perugia for a few months, but Crouch admits the novel didn’t take off. She sat at her desk, Crouch now laughs, wondering “Does my character ride in a chariot? What am I doing?”

Unbeknownst to Crouch as she struggled with her historical novel, a modern-day drama was taking place in Perugia: the trial of Amanda Knox, an American college student accused of killing her British roommate, Meredith Kercher. Crouch hadn’t paid much attention to the story, she says, past maybe glancing at a People magazine profile or two. With an infant and her work filling her hours, the sensational murder trial was “not on my radar,” she says.

One day, Crouch found a dog in traffic and brought it home to her tiny rental apartment. When the dog’s chip identified its owner, Crouch walked “down this dusty road” to return the dog. Upon mentioning to the dog’s owner that she was a writer, he invited her to tea, telling Crouch she had to meet his roommate.

The roommate was Patrick Lumumba, the bar owner Amanda Knox had accused of Meredith Kercher’s murder. “He’s very loquacious,” says Crouch, and as she listened to Lumumba’s story, she knew that it was time to set her historical book aside. Crouch then hired a nanny, choosing a young woman “because she was the only American around and my Italian was really bad.” After a couple of weeks, Crouch learned that her nanny was in fact Amanda Knox’s best friend, who had flown to Perugia to support Amanda.

Crouch became fascinated as she researched the case and began attending Knox’s trial, sometimes bringing her baby daughter along. “I am not a forensics expert, I am a novelist,” says Crouch. “I want to make scenarios work through logic.” But as she listened to the Italian prosecutor’s case against Amanda, Crouch says, “There’s no way I could write that narrative and have it make sense as an organic story based on human nature.” At the same time, says Crouc

h, Knox’s account of the night in question didn’t add up either: “It became this labyrinth.”

But a novel is not beholden to facts. Crouch could let her fictional characters be her guide. In addition, Crouch was able to give voice to “the only person who really knows” what happened on the fateful night in question: “the girl who, unfortunately, passed away.” Crouch felt that Meredith Kercher’s story had become “lost in this, and I think that’s why her voice permeated my head. For me it was all about her. The whole time.”

Using her novelist’s tools, Crouch created Tabitha, a British exchange student who heads to Italy and meets her demise. Crouch visited the house where Amanda and her roommates had lived and drew on her own experiences at Brown University, focusing on female friendships with their attendant joys and heartbreaks.

Though Tabitha’s story does not have a happy ending, Crouch’s does: As she typed away in her cramped apartment, she transformed a quiet voice in her imagination to a finished manuscript.

Of Kercher, Crouch says, “She had her own interesting shadowy things. They had some crazy nights. That’s what you do when you’re abroad.”

Amanda Eyre Ward is the author of four novels and one short story collection. Her new novel, Homecoming, will be published in 2015.