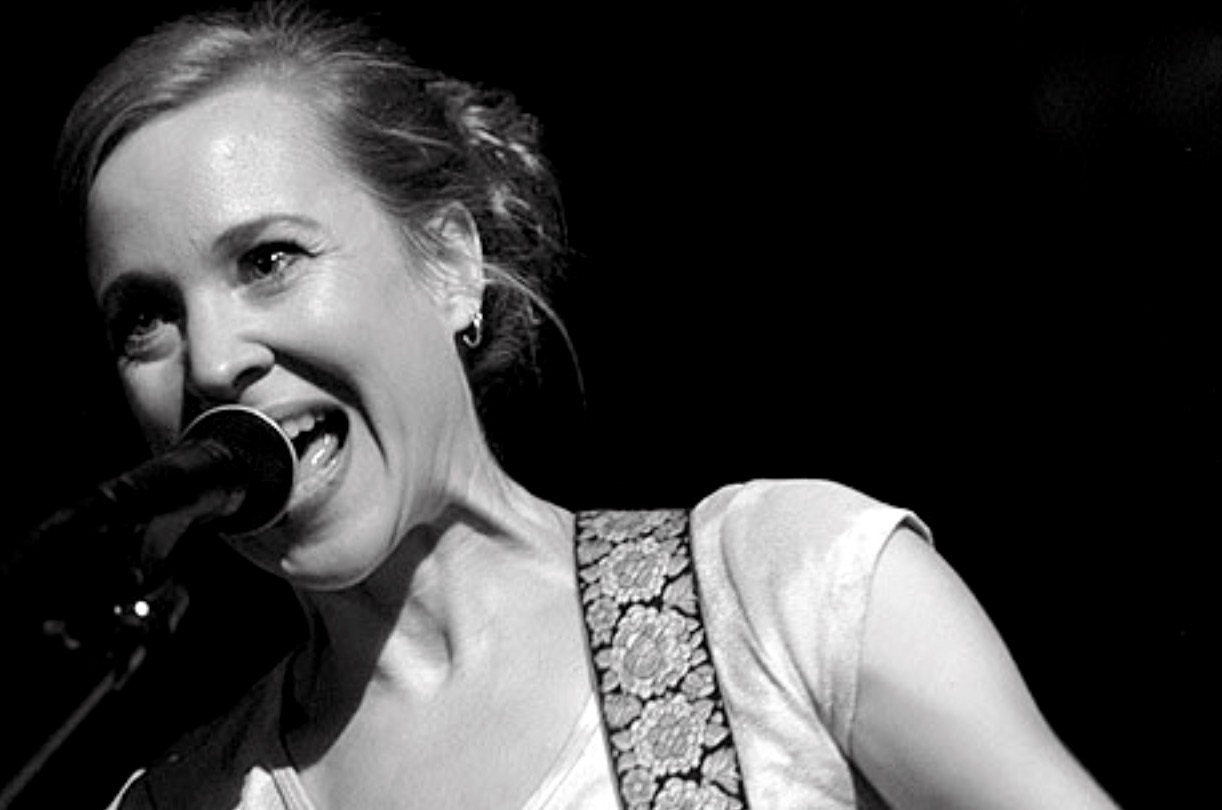 Do you know the music of Throwing Muses? People with even a passing interest in alternative rock from the 1990s probably know something about Pavement, Guided by Voices, Liz Phair—but Throwing Muses remain a more elusive band. Is this because they weren’t as good? No—but then again, maybe that depends on your notion of “good.” Think about it this way: Malkmus, Pollard, Phair—they all seemed, despite their intelligence, goofy, and approachable. But Kristin Hersh, lead singer of Throwing Muses? In song after song, she seemed unhinged, wild, unpredictable. Her voice is one of rock music’s great instruments; it coos, it rasps, it explodes—often within the same verse. There’s a part in “Not Too Soon,” probably the band’s best-known song, where she sings, “I know her,” drawing out the last syllable and then morphing it into something that sounds like “row-row-row-row-row”—a wholly unpredictable, high-pitched cry that seems to merge with the tone of the guitars. It’s a bizarre and disorienting moment; it’s also strangely hooky.

There are a lot of musicians who have written memoirs (Hersh herself wrote a great one called Rat Girl), but I can’t think of one that more thoroughly transposes the musician’s style into prose than Don’t Suck, Don’t Die: Giving Up Vic Chestnutt. (“The book is a song,” she tells me at one point.) In this slender memoir, she tells the story of her friendship with Vic Chesnutt, another unpredictable musician whose audience began to gather in the 1990s. The first thing most people learn about Chesnutt is that he was paralyzed as a teenager in a car accident, left in a wheelchair with limited use of his hands. “[T]here is not another artist, before or since, who has done comparable work with a comparable disability,” Amanda Petrusich writes in her introduction to the book, but Chesnutt’s story was not one of positivity and perseverance; he was a sad man who wrote and performed extremely sad songs and then, in 2009, killed himself. Hersh and Chesnutt toured together in the 1990s (their respective spouses, fascinating and flawed characters too, came along). This book recounts those experiences.

The most obvious comparison is to Just Kids, Patti Smith’s memoir about Robert Mapplethorpe, which people talk about in hushed tones that signify “classic”—somewhat surprising, since the book only came out in 2010. But in some ways, Don’t Suck, Don’t Die feels realer. Smith wrote her book from a place of success, telling romantic stories about the lives of young artists who were destined (and eventually recognized) for greatness. But the legacies of Hersh and Chesnutt don’t enjoy such rhapsodic treatment; neither is a household name like Smith or Mapplethorpe. Just Kids is affable, whereas Don’t Suck, Don’t Die is the kind of primal scream not uncommon in Hersh’s work.

When I talk to her on the phone about Don’t Suck, Don’t Die, her voice sounds slowed, worn-out; one might think it’s the product of years of screaming on records, but old interviews reveal her voice to have been prematurely raspy. Art—music, and writing—has never been a lark for her. Early in life, she was diagnosed as bipolar and schizophrenic. Recent treatments for PTSD (her son was kidnapped back in the 1990s) reveal that she divided her personality into two: one side was the artist, who dealt with all the bad stuff through music and performance; the other side was “a really nice lady, [who] took care of her children and band mates, [who] was always sweet—but [whose] songs were nightmarish, and nobody could figure it out.” For this reason, she says, she has no memory of writing or performing her music. Now cured of PTSD, she doesn’t have the ability to channel her pain elsewhere; she has to live with all of it. In this condition—“raw,” Hersh calls it—she wrote the final version of Don’t Suck, Don’t Die. (She brings up Marguerite Duras’ The War, which the author once claimed to have no memory of writing.)

Don’t Suck, Don’t Die is not only written about Chesnutt; it’s written to Chesnutt, and Hersh refers to him as “you” throughout the book. I ask how this point of view developed, and she tells me it came early in the process, as part of a letter she wrote for publication—a letter she could’ve written to anyone, but which she wrote to Chesnutt “because he had just died. There were so many things that went unsaid, or went unnoticed. He had an ego problem; you couldn’t do enough to fix him, obviously. I didn’t even try that hard, because I had too much respect for him. And really, [the book] is a love letter, from Vic to Tina [Chesnutt’s ex-wife], and me to Billy [Hersh’s ex-husband].” A lot of Hersh’s answers to my questions develop this way: they seem to move further and further away from my original inquiry, until she has pointed her response back at the people with whom she once filled her life—the people who are now, mostly, gone.

Very few people close to Hersh or Chesnutt have read this book—but then again, it’s not a sprawling memoir with a lot of characters, but something far more claustrophobic, focused mostly on Chesnutt, Hersh, and their spouses. “I tried very hard to leave characters out,” Hersh says, “which is hard when you’re working in nonfiction, because things seem to happen and you’re not sure who’s responsible. But I wanted it to be like one of those old movies from the 1940s, about two couples.” As a result, the book feels free from clichés; there simply isn’t enough room for them. The main characters spend a lot of time sitting around, bullshitting with one another. Chesnutt seems volatile, but also funny, and nothing terribly dramatic happens—not, at least, until more than halfway in, when he just…disappears.

I’m curious about the process of recall for a book like this; how did Hersh remember, in such vivid detail, days where so little happened? She says, “Before you finish your question, I should tell you, a musician’s life is only that: all we do is hang out and do nothing. I have no memory of writing the songs or recording or performing, so what was left was touring.” She compares the shenanigans of a tour to Jackass—“it’s almost an aesthetic.” As such, the book is filled with jokes between friends…all of which seem so melancholy, given where we know it’s headed. “There were so many repeating conversations, and some of them struck me so hard that I’ll never forget them. Everybody has a photographic memory when it comes to Vic. The way he said things and chose to word them—it was like no one else.”

As a result, there’s something strangely communal about Don’t Suck, Don’t Die, as though Hersh is remembering Chesnutt for everyone who knew him. At one point, she mentions that every songwriter’s goal is to make people think, I’m not alone, and she feels the same way about memoir. “We’re social creatures,” she says, “and even the shyest among us wants to help. I don’t see any reason to publish something unless it’s going to help. Otherwise, it’s just self-expression.” The way she sneers this word, I can tell she hates it. Well, I hate it too; it has always sounded so reductive to me, and I hate it when artists use it. I tell Hersh that it makes me feel, I don’t know, icky. “So good to hear it!” she says. “Icky’s the perfect word. It can’t possibly be about your baggage, even if it’s memoir….Whining about your feelings is gross to me.”

Not to suggest that Hersh lacks feelings, or is shy about sharing them. In more detail—and with very little prompting—she begins telling me more about her recent treatments for PTSD, through something called eye movement desensitization and reprocessing (EMDR), which involves asking patients to recall distressing memories while inducing eye movements through sensory cues. (There are crude versions of this on YouTube; one in particular, in which your eyes follow the “Happy Balloon” around the screen, is pretty disorienting without professional guidance, though it did make my eyes feel heavy for hours afterward.) This therapy relieved Hersh of her PTSD—relieved her of the split personality that used to disappear into music as a coping mechanism—though perhaps “relieved” isn’t quite the right word.

“I don’t know what’s going to happen,” she tells me. “I’ve always been half a person, because half of me was hidden in music. My life has never been very gentle, and I’ve had a lot of hard stories. [Being] ‘cured’ of something that’s both a coping and survival mechanism is a questionable event in one’s life. So what’s left is my personality, and I’ve never really had one before. I was just a body and music, and now I have this heart and this mind and these guts, and everything is combined, and honestly, um,” and she pauses here a second before saying, “I don’t know how I’m going to make it. I don’t know how I’m going to make it. That’s gone. Everything else hurts so much. I’ve never hurt before unless I was playing music. But that was the music’s pain, not mine. I guess I’m saying, I lost my order, my skin. I’m a raw nerve, and I haven’t learned how you guys do it.”

All of this makes Don’t Suck, Don’t Die seem not just like a recollection of a friendship—or a book about Chesnutt—but more like something that Hersh had to write to start to figure out her current state of rawness—a state that Chesnutt lived in so openly for so much of his life. This final feeling of identification is from where the book derives so much of its force. I mention this to Hersh, and I ask her whether she felt any relief, or catharsis, in writing the book—a book that put her so close, once again, to an old friend who probably would’ve understood her current state had he lived to see it. “Yes,” Hersh tells me, “because I had never considered us to be that similar. We always used to argue all the time. Clearly we had something in common. But when I realized, after writing the book, that we had so much in common, all I could think was, Well, he’s dead. I’m the last alien.”

Whenever she talks, I can still hear it, the unpredictable quality in her voice, the electrical tremor that makes it feel like everything is going to break and fly out of control, even when it doesn’t—the quality of the voice that sang catchy songs to me in my car when I was a teenager and college kid, songs whose rhythms I beat out against my steering wheel, songs that seemed strangely triumphant, and whose pain I never much wondered about—I hear this quality in her voice, even when she says to me, “After always thinking that I was alone, now I know I’m really alone.”