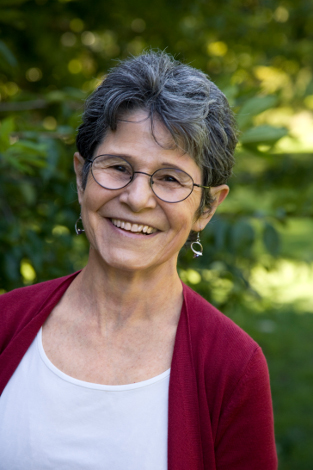 Culinary historian Laura Shapiro hungers for the delectable details of people’s lives—no matter their competence in the kitchen.

“I have always felt very strongly that you don’t have to be a food person—that is to say, an instinctive wonderful cook—to have a relationship with food,” says Shapiro, author of What She Ate: Six Remarkable Women and the Food That Tells Their Stories. “If you can look at food in someone’s life, you can find out something [significant] about that person. They don’t have to have written a cookbook.”

In the course of an award-winning 30-year career, Shapiro has written for The New York Times, The New Yorker, Slate, The Atlantic, and Gourmet, on topics ranging from champagne to Jell-O. She is the author of Perfection Salad: Women and Cooking at the Turn of the Century, Something from the Oven: Reinventing Dinner in 1950s America, and Julia Child: A Life (Penguin Lives series).

Though the six women of What She Ate may be less self-evident subjects than Julia Child, Shapiro proves their food stories to be ripe for the telling: The idea for the book came one insomniac night, when she picked up a biography of Dorothy Wordsworth, beloved sister of poet William Wordsworth (“The Daffodils”), and noted the mention of a curious repast.

“Black pudding, that stodgy mess of blood and oatmeal, plunked down in front of Dorothy Wordsworth, the daffodil girl?” Shapiro writes in What She Ate. “There had to be a story.”

Her inquiry soon expanded to English novelist Barbara Pym, whose extensive personal and professional writings proved her a keen observer of British foodways. Then: Rosa Lewis, an Edwardian-era chef, hostess, and hotelier known as “England’s best cook”; First Lady Eleanor Roosevelt, who presided over the worst White House cuisine of the modern era; Eva Braun, whose last meal was a cyanide capsule consumed in Hitler’s bunker; and Cosmopolitan editor Helen Gurley Brown, famous for what she didn’t eat and drink (she eschewed brownies at parties and often dumped her champagne in others’ glasses or plants).

“Your questions, procedures, and outcomes are going to be very different,” she says, “but, yes, I still think it’s a powerful tool for biography, even when it seems like it’s just a little toothpick and not a big shovel.

“I thought that, if food would show me something about [Eva],” she says, “even if it didn’t answer all my questions, if it would provide me an access, a

way to look at her life, that maybe would show me that I was on the right track with food in general.”

Displaying ample research and evident care, Shapiroreveals some intriguing hypotheses (e.g. that Eleanor Roosevelt helped perpetrate the myth that she was “incapable of enjoying food”) and revels in the possibilities that we may reacquaint ourselves with these famous women through what they ate.

“I feel so strongly that food belongs in biography,” Shapiro says. “My dream of reading biographies from now on is that they’ll all go on and on about what people ate, no matter who the people were, and that ... people who keep any kind of personal archives, don’t throw out the stuff about the food, don’t throw out your recipes—keep everything. Somebody in the future is going to bless your name, I promise you.”