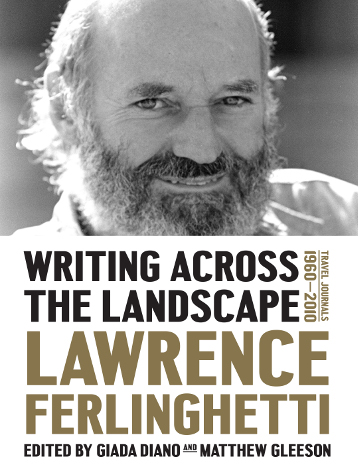 “Travel brings out confessions one would never make at home,” Lawrence Ferlinghetti wrote in 1961 while contemplating the strange, desiccating Salton Sea. “I am trying to draw the rake of my journal over the landscape. Perhaps I will uncover something.” As one of the early passages in his new book, Writing Across the Landscape: Travel Journals 1960-2010, the lines feel like equal parts challenge and credo as he embarks on his lifelong wanderjahr. “My whole life has been a walkabout,” he says now, at age 96. “I didn’t realize how much I’d traveled until we started putting this book together.”

However, this new collection was never part of Ferlinghetti’s plan. He writes explicitly that he had no intention of ever publishing these journals, and it was almost by accident that the idea came about. “My Italian translator Giada Diano discovered these little spiral notebooks of all sizes in my archive,” Ferlinghetti explains. “She dug them out and said, ‘Gosh, these should be published.’ She couldn’t take the actual notebooks out of the library, so she had to photograph each page and then transcribe each page from the photographs.”

Though these journals begin in 1960, the source for much of his travels was made possible by events in the 1950s, when Ferlinghetti established himself as a unique literary presence and risk-taker. In 1953, he founded San Francisco’s famed City Lights Bookstore with City Lights Publishing coming soon after. In 1956, City Lights published Allen Ginsberg’s Howl, for which Ferlinghetti was subsequently jailed and tried for obscenity. He won the trial and national attention alongside it. In the decades that followed, City Lights successfully continued to publish books from authors like Frank O’Hara, Charles Bukowski, Diane di Prima, and many others. “I really didn’t know much about running a business,” Ferlinghetti admits. “I just got a lot of really smart people who knew how to run a bookstore. Of course, I knew what kind of bookstore I wanted to have, I just had to execute it. It’s seldom noted that bookstores don’t regularly publish books.” This last comment is made with immense pride. “Very, very rarely does a bookstore publish books.”

It was often quests to track down poets and manuscripts for City Lights Publishing, in addition to his own poetry readings, that sent Ferlinghetti to Italy, Mexico, Australia, or elsewhere around the world. Plenty of recognizable figures make cameos throughout Writing Across the Landscape, too: Ginsberg, Jack Kerouac, Pablo Neruda, Ezra Pound, and even Fidel Castro, to name a few. The focus, though, remains on Ferlinghetti’s meditations on the road. Through anecdotes and previously unpublished poems, his reflections on society, politics, and nature are intimate and candid.

Perhaps most engaging is how his perspective of frequently visited countries and cities changes over the decades. Nothing embodies this more than Paris, which Ferlinghetti first encountered in 1947 and most recently visited this past July. Through his writings, readers witness the city’s subtle, and not so subtle, changes over the latter half of the 20th century. “In 1947, Paris was still an occupied city, as far as everything was dilapidated,” Ferlinghetti reminisces. “There were lines for milk in the morning, buildings were in poor shape, and thousands of people every morning would go to work on their bicycles, wearing their blue smocks, which was the working clothes. Of course, that’s all gone now.”

These day-to-day aesthetics, enhanced by Ferlinghetti’s shrewd eye for observation, turn both countryside and city streets into works of art. Like paintings, the beauty of the words are immediate, but with a second pass, or a third, the depth of the scene becomes apparent, even heartbreaking at times. In the collection’s final passage, Ferlinghetti admits that after a lifetime traveling the world, he hasn’t uncovered any secret meaning of life or great, unspeakable truth. “Pardon my conduct then if I can’t give you any final word—a final unified theory of existence,” the poem reads. But he also speaks to the magic of travel—to go to unfamiliar places is to become a child again, to be filled with wonder, and to turn that wonder into something tangible. “The best travel leads to poetry,” he says. “You can say the best prose rises to the level of poetry, and I tried to do that.” Perhaps that’s all an honest traveler can hope to uncover.