Leslie Lee Writes of Ireland and Her Family’s Buried past 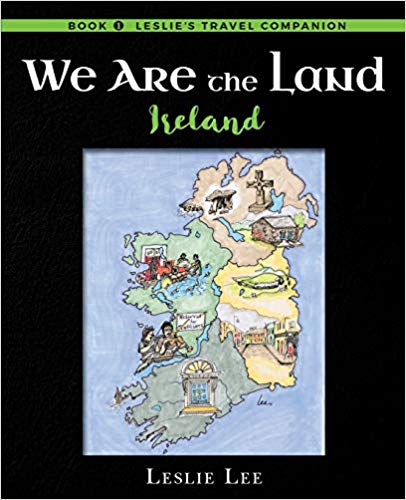 Sometimes, to find your home, you have to cross the sea to a place you’ve never been before. That’s the journey Leslie Lee recounts in We Are The Land: Ireland, her luminous travelogue and memoir of Ireland.

Lee helped start the technology firm U.S. Robotics, then left it in 1986 to raise her family in northern Michigan, where she spent childhood summers on her grandparents’ homestead. Her family had strong ties to Michigan, but she often wondered where they’d started from.

“We have a form of amnesia in America because we can’t get past a couple of hundred years to know about our family roots,” Lee notes. “We’re not Native Americans, and I wanted to know where my people had been for the last 30,000 years. So we started looking.”

Family lore, genealogical research, and a DNA profile let Lee trace her father’s side back to the 17th-century Scotch-Irish—Scottish Presbyterian immigrants to Northern Ireland—and her mother’s side to a genetic lineage that settled in Ireland thousands of years ago.

Her ancient native-Irish ancestry surprised her. “My very proper maternal grandmother always acted like we were either British or Scottish, sweeping the Irishness under the carpet out of shame, I think.” Lee, however, was thrilled and went to Ireland in 2007 to learn more about her forebears, accompanied by her sisters, Liz Evans and Jenni Hebert, and her cousin Josie Ellison.

The result, We Are The Land, the first book in Leslie’s Travel Companion series, is in part an engaging travelogue based on her notes on cozy hostelries, scrumptious menus, tourist spots, and auto routes.

But more than that, it explores an Ireland whose past is deeply personal. Lee visited prehistoric megalithic tombs, vast and decorated with mysterious carved symbols, where her ancestors likely greeted the winter solstice. She searched a parish registry for family records and helped Liz break into a closed graveyard in Carrickfergus to hunt for relatives, which ended in a rescue by firefighters.

Backgrounding her beguiling quest is Lee’s erudite, engaging dive into Irish history, which discusses genetic studies of the Irish population, ethnolinguistic evidence of prehistoric migrations, and traces of real events captured in Irish mythology. The book includes much engrossing information for Hibernophiles, including historical timelines, a glossary of Gaelic pronunciation, colorful maps of Irish provinces and clans, and a sidebar on the genetics of Irish redheads.

Her work on these subjects is long-standing. “Back in college I was really fascinated by historical linguistics,” she recalls. “Then I got interested in genetic studies that started coming out in the 1990s that matched up DNA with the spread of languages. The science is changing so fast that you have to stay on top of the latest papers in the professional journals.”

But Lee’s deft scholarship never overshadows her artistic and literary portrait of Ireland, which includes snatches of her poetry and dozens of her haunting watercolor sketches of the places she visited. “I have a little watercolor kit, and when other people get their cameras out, I’ll sketch as fast as they take pictures. That makes you really look at things: what’s in the air, the colors, what’s in the movement and the shadows. Every one of those pictures is fixed in my mind.”

That connection to landscapes is present in Lee’s previous books, Backcountry Ranger in Glacier National Park, 1910-1913 (1994), based on her grandfather Norman Pearl’s diaries and photographs, and Sacred Space (2014), about her Pine Hollow house, built from native Michigan stones and woods. She found the Irish landscape especially resonant. “I was near the ocean, and I loved the rolling hills and the colors. The rain didn’t bother me; my hair would get curly, and my skin was dewy. I definitely felt like my cells recognized the place.”

Above all, We Are The Land is a love letter to the Irish people. “Ireland has a long-standing culture of hospitality, beginning with the ancient Brehon laws that said you could not turn people away from your homes without shelter and food,” says Lee. “They also have great on-the-ground music; they just strike up and start playing in the pub or around the dinner table. People are very forthcoming: They pause, they look you in the eye, and they engage in real conversation.” Lee’s writing captures that warmth and soulfulness in poetic evocations of everyone from an inveterate pub charmer (“After only a few minutes of exchanging our narrative, he had somehow kissed all of us”) to a weathered farmer:

He walked slowly from the barn toward the car. I could see he had once been tall, with huge hands….Yet up close he was stooped with age and work, his face and hands creased, hardened, and worn. He had kind gray eyes and a patient way that was sure to be good with horses.

That kind of writing, lyrical but grounded in everyday details, has won Lee plaudits from the likes of Irish American Thomas Lynch, who judged We Are The Land “well worth the journey,” and Kirkus Reviews, which calls it a “charming, informative, and creative memoir” whose prose “often achieves a delightful, pensive elegance.”

In the end, Lee did discover more of her roots, she says, though less through genealogical sleuthing, which sometimes came up a dead end, than through the quintessentially Irish strategy of chatting up strangers, which helped her locate a crucial ancestral hamlet.

“The highlight of our trip was having this random lady in a butcher shop come out and say, ‘I don’t know about Ballywillwill, but my husband was raised in Ballywillwill.’ So he took us there, and suddenly we were standing on our family’s old homestead!” From there they made contact with distant cousins who indeed felt like kin. “They were warm and kindly and humorous and welcoming. Everybody teared up. We’ve stayed very good friends.”

Lee has just published a conventional pocket-sized travel guide, the second book in the Leslie’s Travel Companion Series, Leslie’s Field Guide to Ireland (2019). She’s planning more explorations into her maternal line in Ireland and more travel memoirs, including an account of her adventures tracking down the strange stone carvings of the ancient Picts on Scotland’s Pictish Trail.

Her Irish sojourn has convinced her that travel can connect you with your present-day family, not just long-lost forebears. “I didn’t get along with my mom or my sisters very well” before the trip, Lee recalls. “Now my sisters and my cousin are much closer, and I became much closer to my mom. Sharing fun and positive experiences replaces the bad times and heals wounds.”

Will Green is a writer in New York.
MORE FEATURES
POPULAR KIRKUS STARS