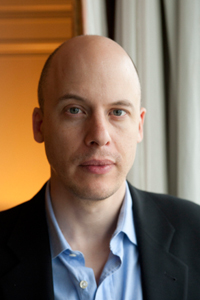 After 10 years of work, three best-selling and critically acclaimed novels, and nearly 1,000 pages, Lev Grossman’s groundbreaking Magicians trilogy has drawn to a close with the August publication of The Magician’s Land. “I started the first book in 2004,” Grossman says. “I really do feel a lot of pride and a sense of accomplishment. This is the best thing I’ve done in my life. Well, other than my kids.”

When Grossman embarked on his trilogy, American culture was changing its dismissive view of the fantasy genre. “There was a period in the 1980s and 1990s when the dominant pop-culture was all sci-fi. I mean Star Wars, Star Trek, The X-Files, The Matrix,” Grossman says. “Then the pendulum swung the other way and people were interested in fantasy.”

As a lifelong fan of authors such as C.S. Lewis and J.R.R. Tolkien, Grossman was thrilled by the rise of J.K. Rowling, Philip Pullman, and Peter Jackson’s Lord of the Rings films.

Yet, despite this eruption in movies and literature, something was missing. “I was very aware that fantasy was helping me with some things in life and not others. I was aware of how incompletely Narnia had prepped me for the challenges of adult life,” Grossman says. “I wanted to know what magic would feel like for adults and alongside sex, drinking and confusion. I wanted to write that story,” Grossman emphasizes. “A story about people who discover power they didn’t know they had, who find themselves in a world they didn’t know existed. Not children, but people who had my problems.”

The three novels revolve around Quentin Coldwater and a few of his former classmates from Brakebills Academy, a school for magicians. In the first book, Quentin and his friends, Alice, Eliot, Janet, and Penny, along with Julia—from his life before Brakebills—discover that Fillory, a fantastical land at the heart of a series of books Quentin cherished as a child, is real and in need of their help.

These plot mechanics might sound familiar, but the triumph of Grossman’s trilogy is in making something fresh, and even violent, out of the well-worn tropes of the genre.

“In fantasy, the hero will meet an avuncular character who will tell them what they need to do and point them in the right direction. Someone is the incarnation of ultimate evil and you know your job is to defeat them. Difficult but simple,” Grossman says. “My experience of life was different. My entire 20s were consumed by failed careers, aimless wanderings and unpublishable writings.”

His books make fantasy just as complicated and messy as real life. Over the course of the trilogy, Quentin thirsts for quests to give his life meaning, but each adventure is paid for in blood.

Quentin’s scars last with him through The Magician King and are etched deeper in The Magician’s Land. Quentin is now 30 years old, racked with guilt over all the suffering he’s seen, and realizing, despite all his adventures, he doesn’t have much of a life. Fillory has kicked him out, Brakebills has turned him away, and his father has died.

One of the triumphs of the trilogy is watching characters evolve over the course of the books. In The Magician King, Julia’s long, tragic transformation from someone who couldn’t pass the Brakebills admission test, to a magician full of terrible power, is one of the novel’s strongest elements. The Magician’s Land is much more about Quentin’s journey. He’s lost and the threats that surround him are greater than ever before.

Fillory itself is being torn apart, not by outside enemies, but by its own natural, inevitable death. He must come to terms with his father, face the inhuman Alice, and find the strength necessary to grow up and save the day by doing what Fillory’s own gods don’t have the strength to do.

“I wanted to write about someone coming of age,” Grossman says. “It’s a slow process. It doesn’t happen in an instant. Quentin has to learn who he is, who he isn’t, and he has to find what his work is in life.”

When asked if Quentin is a reflection of Grossman himself, at first he demurs. “All characters are mirrors of myself at different angles, and probably it’s Julia more than Quentin. Although,” Grossman admits, “Quentin absolutely more than the others reflects my own sense of disorientation.”

Julia and Quentin form the emotional core of The Magicians Trilogy, and the connection to Julia is very much about his relation to the world of literature. “I’ve known for most of my life I wanted to write fiction, but for a long time I couldn’t figure out how,” Grossman says. “I felt locked out of it, like an outsider, left behind, like Julia [was kept from Brakebills].”

Despite publishing two books before The Magicians, Grossman feels like this trilogy is what made him a true writer. “Until I wrote The Magicians I didn’t feel like I was drawing blood with what I was writing,” Grossman says. “I wrote continuously until I started The Magicians at 35, and before then I never felt like I found my voice. That’s a long time to sit on the outside.”

Grossman has reached a new confidence in his writing, which comes through in The Magician’s Land. And now he’s ready to move on.

“The story’s over,” Grossman says. “Or, at the very least, Quentin’s story is over and Julia’s story is over. I was very curious about what happened to Quentin after the end of The Magicians and The Magician King, but now I feel a lot of closure. I don’t find myself wondering.”

Grossman is already halfway through his next novel, although he’s not sure if it’s fantasy or not. Either way, Grossman knows that there’s something special about magic that will likely keep him coming back for more. “Magic is a metaphor for a lot of things,” Grossman says. “The escape into Narnia was so resonant for me as a child because it’s…how you disappear into a novel. In my world there isn’t any magic; but, if there is, it’s in books.”

Richard Z. Santos is a writer and teacher living in Austin. His work has appeared in The Texas Observer, Culture Strike, Nimrod, The Rumpus, The San Antonio Express News and many more. He’s working on his first novel.