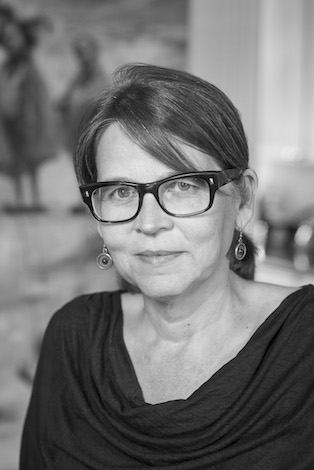 Lori Ostlund doesn’t need to know authors’ lives to appreciate their fiction—but it won’t stop her from wondering.

“I don’t know that I want to know [their biography] beforehand,” Ostlund says, “but as I’m reading I might go to Google and wonder if they lived in a certain setting, what’s this about, what’s that about? Oh, I wonder.”

You don’t need to know Ostlund’s origins to appreciate the keen realism and legato prose of After the Parade. The debut novel chronicles the life of native Minnesotan Aaron Englund, as he leaves his partner of two decades and their Arizona home. On his own for the first time in San Francisco, Aaron reflects on the curious and devastating events that shaped his life. This includes the accidental death of his father, at a parade, resulting in his mother’s breakdown and their relocation to an unwelcoming town.

“Everything about the house felt wrong, not just the placement of walls and doors and rooms but even the small things: the resistance of the bathroom faucet handles, the way his chair caught on the linoleum when he slid back from the table, the quiet of the refrigerator at night. He went through the Packers’ house, turning on lights, but when he reached for the switch in the kitchen, it was not where he thought it should be. He was years from developing an affinity for metaphor, years from the moment that his eighteen-year-old self would stand in Walter’s house on his first night there, his hand fluttering like a moth against the wall as it searched for the switch, and think, This fumbling in the dark is how life will always be,” Ostlund writes.

Ostlund is the author of The Bigness of the World, a short story collection which won the Flannery O’Connor Award for Short Fiction, the California Book Award for First Fiction, and the Edmund White Award for Debut Fiction. (After the Parade was recently short-listed for the Center for Fiction’s 2015 First Novel Prize.) She is a native Minnesotan, former Arizonan, and current resident of San Francisco, where she lives with her partner and pets.

“I very much relate to the way [Aaron] began moving farther and farther out into the world, which certainly was the trajectory that I followed,” Ostlund says. “When I was growing up in the Seventies in Minnesota, I grew up in a hardware store. We just worked in the hardware store. We were Protestants, and we didn’t take vacations, and that was kind of my life. Now, when I look back at [that experience], there’s something very familiar about it—and maybe familiar in a way that allows me to write about it—yet I feel sometimes that it’s so unfamiliar.”

Aaron isn’t raised in a hardware store, but he is imbued with Ostlund’s memories of what it felt like to be a child. She artfully captures Aaron’s early years—a seemingly endless string of encounters with the unfamiliar.

“Aaron did not know what an elevator even was, but he followed his mother into the building, where they stood in the lobby with a group of men in suits who stared at the two of them, dressed in shorts and grubby T-shirts. Everyone got on together, the other riders rising up around him like corn. When the elevator began to move, he took his mother’s hand and held it tightly while she laughed in a way that suggested she was not entirely at ease either.

On the way down, when they were alone, he asked his mother how the elevator worked. ‘Cables,’ she said. ‘You know, ropes pulling it up and down.’ He imagined people sitting above them, turning these ropes day after day.

“One of the things I was hoping to do with Aaron’s childhood was to remember how new things feel, and that whole idea of being in a state of wonder,” Ostlund says. “As an adult, it honestly doesn’t happen that much. You go through your life, and your days are routine, and that’s how you kind of need it to be.”

By entering a longterm partnership with a much older man very early in his adulthood, Aaron establishes a much-desired routine. It’s a hopeful remedy for a chaotic childhood, but “the Pygmalion aspect of their relationship” contributes to deadening his sense of wonder. Opening with the U-Haul in their shared driveway, After the Parade is the story of a reawakening.

“I started writing the adult chapters right around when I moved to San Francisco, so I said what if Aaron moved to San Francisco?” Ostlund says. “At that point, he’s just left this lover, and he’s been with this person for many years, and he’s never lived alone, and what would that mean? He’s never had that kind of freedom. He’s never had that kind of solitude. So that’s where I started to really understand the adult.”