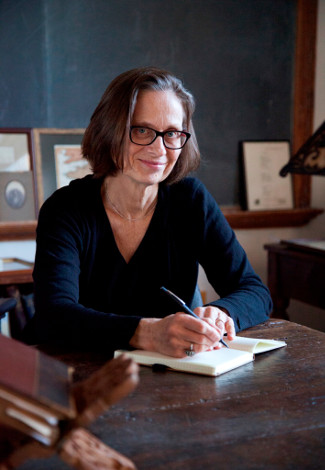 For April Fools’ Day I wanted to file a two-sentence article on Can’t and Won’t, because Lydia Davis writes very short stories. I didn’t know if my editor would appreciate my humor. He is very busy. I decided not to file that story.

It wouldn’t have satisfied: Brevity may be the sole of Davis’s well-heeled prose, but she’ll tread multiple pages when a story warrants. “I want a story to feel complete, well structured, fairly surprising or fresh, true to life, true to emotion, thoughtful: all those things,” says Davis.

Davis, who counts a MacArthur Foundation genius grant and the Man Booker International Prize among other doozies, writes with exquisite inquisitiveness, frankness and wit. In Can’t and Won’t, stories by the dozens, divided into five sections, display her mastery of the short form. Topics tend towards the minor inconveniences and gentle distress of modern life, with subtle twists that urge rumination.

A notable number of the collection’s stories deal with travel by train and plane. “I would say that’s happening in the more recent book because of how I divide my time. It’s not because I thought, ‘Well, I’d like to write a lot of stories about people in transit.’ It’s more that I tend to write when I’m in transit and maybe not write as much when I’m at home—or I do a different kind of writing at home,” says Davis, who lives in the countryside near Albany, New York, where she’s a creative writing professor at the state university. In 2012 she logged many hours commuting to NYU as the Lillian Vernon Distinguished Writer-in-Residence. That was before Amtrak instituted its Residency for Writers fellowships. Davis has never heard of the program. “I think that sounds like a great idea. Maybe I’ll apply for one,” she says.

In the titular story, a writer is passed over for a different award: “I was recently denied a writing prize because, they say, I was lazy. What they meant by lazy was that I used too many contractions: for instance, I would not write out in full the words cannot and will not, but instead contracted them to can’t and won’t,” Davis writes in entirety.

She often mines her life for subject matter. In “Letter to a Marketing Manager,” for example, the premise is true: She was erroneously named a notable McLean Hospital alumna in a Harvard Bookstore newsletter. “That was absolutely true,” says Davis, who lived in Massachusetts, but not at McLean. “What

I want to say about fiction versus the essay or memoir is, in that case, every single thing in it is true, but the tone of the narrator and the style in which she tells the story is not true to me. What I’m doing is assuming a voice that isn’t exactly mine and telling a true story about me. It’s still quasi-fiction for me because of the way it’s done and the intention of it.” She seems less concerned with implications than inaccuracy. “McLean always had a reputation as being a very classy mental hospital,” she says.

These altered accounts are interspersed with stories labeled “story from Flaubert” or “dream.” In the former, Davis, who’s also a lauded translator of French literature (Swann’s Way, Madame Bovary), retells vignettes from Flaubert’s personal letters. “I like that it’s a perfect mid-point between my own stories and my translating work,” she says. The dreams are often borrowed  with permission from friends and colleagues (e.g., from “A Grandmother”: “Later, at home, it is discovered that while she was eating cashews from a bowl, she also ate her hearing aid.”). That discomfiting thrum of low-level anxiety pervades others’ lives as well.

I wonder if Davis won’t worry that everyone will want to tell her their dreams now. She doesn’t seem concerned. “Most of the things you worry about happening just don’t happen,” she says. “One friend who’s a former student, she sent me a little dream diary for myself—but I wouldn’t even mind if people offered me their dreams. I’m sure it wouldn’t become too oppressive.”