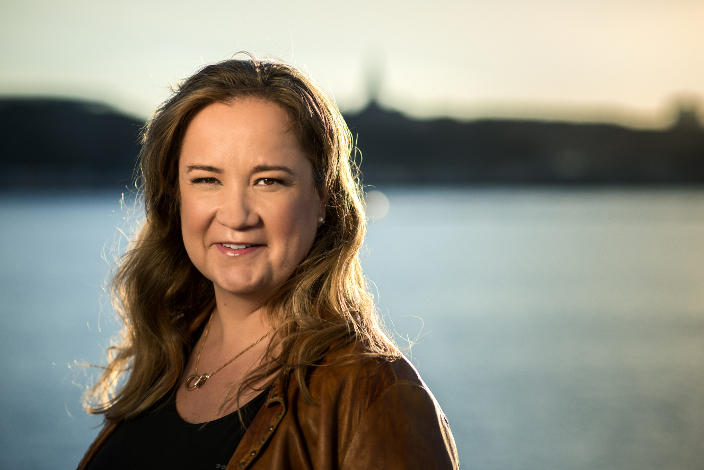 Malin Persson Giolito says she “always knew” she’d one day write a novel about a school shooting—she just didn’t realize what a challenge that would be. Quicksand, her widely acclaimed English-language debut (a bestseller in her native Sweden) skillfully depicts the causes and consequences of a mass shooting, blending elements of courtroom drama, taut psychological thriller, and coming-of-age story.

The novel opens in a classroom, the stark scene of the shooting, the air “hazy and gray with gunpowder smoke.” Surrounded by bullet-ridden victims, eighteen-year-old Maja cradles the dead body of her troubled boyfriend Sebastian, son of the richest man in Sweden and the perpetrator of the crime; the question of Maja’s complicity in aiding Sebastian drives the courtroom scenes that structure the novel.

But the central question, Giolito points out, is not so much what happened, but why it happened—a question that is deeply rooted in issues of race, privilege, and cultural values. “That  was what intrigued me,” she says. “A school shooting is not a crime that fits statistics, that you can easily see coming. And you can’t ever fully explain school shootings. Why? What brought you to this?” And only in a school setting, she notes, could you “bring together those of such different class, race, and riches who would not ordinarily be in the same place.”

Piecing together the stories of the shooting and its victims is Maja; with a voice that is at times peevish, petty, and remote, at others sharply perceptive and heartbreakingly vulnerable, her narration moves back and forth in time, offering bits of backstory woven into the ongoing court proceedings.

Maja’s character and perspective are key to readers’ understanding of the tragedy, but Giolito says discovering Maja’s unique voice was also the key that unlocked her ability to tell the story. “Until I found Maja, the story couldn’t move,” Giolito laughs ruefully. “This took me  four years, and I rewrote it 400 times! So many different stories in this story. First, there’s what Maja goes through. Then what the lawyer goes through, then what her parents and the victims go through.”

Gioloto cites Harper Lee’s To Kill a Mockingbird as “the one conscious influence” on her novel. Calling the classic “the best courtroom drama ever written,” she praises its deft, insightful handling of difficult topics like race, injustice, the role of the lawyer—“a deeply complex story, all told through the eyes of a child.” Maja is her Scout, “not as young or naive as Scout— she’s much more cynical, mean and damaged—but Maja’s still somewhat a child and doesn’t know the court procedures,” and so offers a fresh view of the proceedings.

The author was thrilled by Rachel Willson-Broyles’ English translation: “I cried. It was the first time I could read the story with enough

distance to really appreciate it.  Reading the translation was mind-blowing. I don’t know a better word for it.”

Giolito notes with satisfaction that Quicksand is spoiler-proof—“it’s suspenseful, but even if you skip ahead, you can’t ruin the ending.” Yes, there is a courtroom drama that begins with the charge, the question of whether Maja’s complicit in murder and yes, it ends with a verdict. But the real story is Maja’s transformation—and that of the reader’s relationship to Maja. “The reader is the judge. You have to sit through the court proceedings, and you have to absorb the backstory, which is woven in like a jigsaw puzzle in order to come to a deeper, more compassionate understanding of Maja. Only then can we make our final judgment.”

Jessie Grearson is a writer and graduate of the Iowa Writers’ Workshop living in Falmouth, Maine.