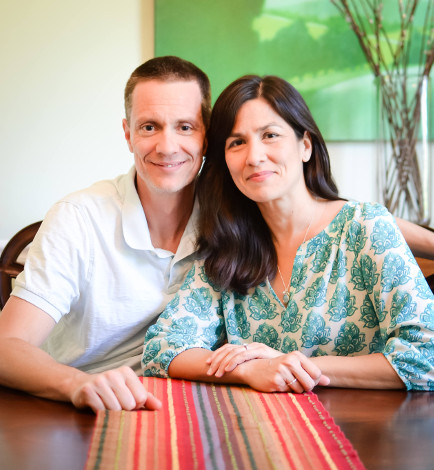 If choosing a new hue for the bathroom walls can test the strength of even the most solid marriage, writing a collaborative book could be the literary equivalent of undertaking a complete gut rehab. Joining forces with a spouse on a novel might result in a fine piece of literature, but remaining on speaking terms post-publication is questionable. When I talk to Marisa de los Santos and David Teague about their middle-grade novel Saving Lucas Biggs, they don’t sound like mere survivors of a joint project; they’re ebullient at having worked together and profusely complimentary of each other. De los Santos is a New York Times best-selling author of adult fiction, and Teague is a picture-book author.

Was middle grade a way of meeting on middle ground? “I’m not sure I’d call it a middle ground because it really did seem like a very different kind of book to me,” de los Santos says. “It’s just a genre that both of us think is incredibly rich and also important.”

“We’re really interested in the books our children are reading right now in the middle-grade genre,” adds Teague.  “I’d been interested in the genre before and attempted it in the past, but it never really took off until I had Marisa as a partner. Just the discipline of working with another writer helped me stay more focused.”

Saving Lucas Biggs is, fittingly enough for two authors, a split narrative. The story begins with 13-year-old Margaret having just been dealt a terrible blow. Her beloved father has been unjustly sentenced to death by Judge Lucas Biggs, a man as powerful as he is corrupt and bitter. At the encouragement of her best friend Charlie’s grandfather Joshua, Margaret decides to take advantage of the familial ability to travel through time so that she can attempt to right the wrongs of Judge Biggs. The chapters alternate not only between Margaret’s and Joshua’s perspectives, but also between 2014 and 1938, a significant year for Biggs and, thus, the one to which Margaret travels.

“It is a time-travel book, but initially we had two really distinct time periods,” says Teague. “Not to give too much away, but the logic of any kind of time travel—Terminator or anything—is at the end of the story; all the contradictions that come with the idea of time travel, they have to be worked out.”

De los Santos writes from present-day Margaret’s perspective, while Teague tackles circa 1938 Joshua, but the writing process wasn’t just a case of dichotomizing a narrative based on decade. On top of addressing time-travel contradictions, it was imperative that Margaret’s voice be the same in Teague’s chapters as it was in those of de los Santos’, and vice versa for Joshua’s voice.

“David is incredibly inventive and imaginatively adventurous in a way that I maybe haven’t been as much,” says de los Santos. “He has a real daring when it comes to imaginative leaps. And as I continue to work on books alone—not that my adult fiction has time travel—I think more chance-taking is something that he brought and that I’m starting to learn from him.”

Teague’s tendency may be toward daring leaps, according to de los Santos, but he likes the thoroughness of her character development. “She takes more time and really goes at her characters from the inside in a way that I don’t think I had learned to do before I worked with her,” Teague says. “Just to have a character who could be in the same scene with Marisa’s characters, I had to really raise my game.”

Margaret is dealing with an appalling event in 2014, but circa 1938 Joshua and his family are as well. He lives in a mining town where a greedy corporate executive so mistreats the miners (his father included) that they strike, leaving their employer-owned housing and establishing a camp on the outskirts of town until work conditions improve. Their peaceful protest is met with an assault of crude weaponry, resulting in several deaths and injuries. This nightmare of political injustice and inhumane brutality is based on the Ludlow Massacre of 1914 in Colorado.

“When I first read about this Ludlow Massacre, it was almost incomprehensible for me to think that children could be in a tent with their mother eating breakfast and fellow citizens of the United States would drive up in a tank they had made and begin firing machine gun slugs into their tent,” says Teague. “And then I thought, ‘Well, how do you survive that?’ And I guess in all these situations, it must be friendship.”

Amid a corrupt judge, a massacre, a murder and time travel, there’s a message that corrupt powers need to be kept in check even if the task seems insurmountable. But to the two writers who acknowledge liking books that have “humor intermingled with severity,” this isn’t the core message.

“I would say that the book is more about friends and what they can accomplish together than it is about these big-picture injustices or big, swooping historical moments,” says de los Santos. “All the kid’s books I love—the Madeleine L’Engle books or The Dark Is Rising series, even the Narnia books—they come down to what people can accomplish when they care about each other and they decide to work together. The bottom line is that all this crazy magical stuff can happen, but magic isn’t going to save you,” she adds. “You have to save yourself.”

Gordon West is a writer and illustrator living in Brooklyn. He is admittedly addicted to horror films and is at work on his own teen novel.