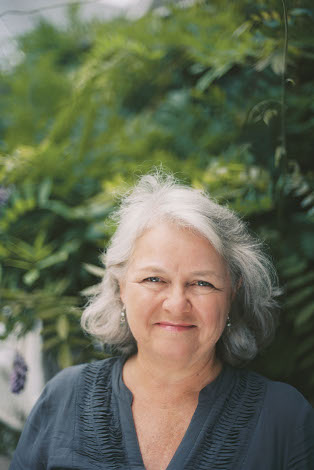 Move over, Merriam, and watch out, Webster: Mary Norris is a logophile’s new best friend.

As a copy editor at The New Yorker, Norris became a doyenne of dashes and diaereses, those double dots over adjacent vowels that we (i.e., I) naïvely thought were umlauts. Over decades she’s corrected a remarkable roster of the world’s best writers, from Rushdie to Remnick.

“One of the things I like about my job is that it draws on the entire person: not just your knowledge of grammar and punctuation and usage and foreign languages and literature but also your experience of travel, gardening, shipping, singing, plumbing, Catholicism, midwesternism, mozzarella, the A train, New Jersey,” Norris writes in Between You & Me: Confessions of a Comma Queen.

Growing up in Cleveland, Ohio, Norris dreamed of becoming a dairy queen. “I had had a fantasy for years about owning a dairy farm—I liked cows: they led a placid yet productive life,” she writes. She never looked back at the pasture, after taking her first New Yorker job, as a page OK’er, in 1978, but remained down-to-earth. In person and in writing, Norris is approachable, amiable, and precise, but not persnickety, despite the prestige her position confers.

“I would have a lot of nerve being elitist,” Norris says over hot tea in Manhattan. “Those Irish relatives: they were potato diggers. My grandmother was a washerwoman; my father was a fireman. I went to a state university. Maybe, at some point in my teens, I had pretensions to going to an Ivy League school, but that didn’t work out, so I think I’m not in too much danger.”

Between You & Me is a lively essay collection that’s autobiographical, educational, and piercingly funny. It started when Norris jokingly took offense to a provocative piece, by Ben Yagoda, in The New York Times, titled “Fanfare for the Comma Man.”

“He began with, ‘Is it safe to talk about punctuation again?’ It turns out, it was not. He made fun of the New Yorker commas—we do use a lot of them—so I wrote the defense,” she recalls. “I thought, ‘Well, I really do have some obligation; no one else is going to defend these commas.’ ”

“In Defense of ‘Nutty Commas’ ” was published April 21, 2012, on the New Yorker website. It became so popular that Norris soon received more requests to wax punctuational. She wrote on hyphens, and the dreaded diaeresis, which eventually led to a book deal with W. W. Norton.

Norris continued to hone her craft at The New Yorker while writing the book.On work days, she often awoke at 5 a.m. to spend a few hours on the manuscript before heading to the office. The other way around—copy editing then writing—just didn’t cut it.

“Part of being a good copy editor is being kind of permeable, being able to take those words in, and they’ll wear grooves in you,” says Norris, “but you can get kind of waterlogged by other people’s voices, other people’s words. By the end of the night, I couldn’t get my own thoughts back. All I could do was have a Negroni.”

In Between You & Me, Norris takes readers from behind the scenes at The New Yorker to the Paul A. Johnson Pencil Sharpener Museum (the pencil is Norris' preferred tool). Chapters include “Spelling Is for Weirdos,” “Comma Comma Comma Comma Comma, Chameleon,” and “Who Put the Hyphen in Moby-Dick?” Each chapter is jam-packed with witticisms for wordsmiths to adore, print out, and tape to their computer monitors:

“The English language is full of words that are just waiting to be misspelled, and the world is full of sticklers, ready to pounce.”

“ ‘Whom’ may indeed be on the way out, but so is Venice, and we still like to go there.”

“Spelling is the clothing of words....A misspelling undermines your authority.”

Traditional grammar instruction is wedded to examples à la minute. One sharp lesson on the who vs. whom conundrum mines a friend’s error-riddled Facebook feed: “Annie wrote, ‘In this bright fall light the damage humans be wearing is so in your face that its near impossible to not love—even those whom are screaming for a bitch slap.’ ”

Those who read Norris will inevitably second-guess the punctuation of their next series of emails (or articles), but she just might make a copy editor out of you. In her opinion, a healthy dose of self-doubt is the best trait one can have. “You don’t see mistakes unless you’re willing to see your own mistakes,” she says. “Self-doubt is almost a job qualification.”