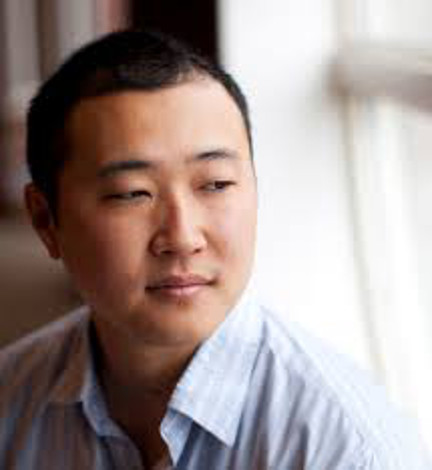 Or is it? In the wake of 9/11 and his uncle’s suicide, Tee is taking a semester off from college. He’s found himself in Prague struggling to come to terms with his own being, his adoption, his father’s transgression, his uncle’s suicide. New Year’s Eve of 2001 under the fireworks in Prague, Tee celebrates, stripping down to his boxers: “he felt dizzy with the idea of starting out clean of his past, like a baby.” At this moment he meets Katka and Pavel Picasso, the muse and the painter, wife and husband, both ex-revolutionaries. Tee and Katka are drawn to one another and start to have an affair. As Prague is deluged with rain in the hundred-year flood, Tee and Katka are holed up in Tee’s apartment against all evacuation warnings, riding it out for better or worse. Tragedy after tragedy befalls the new couple in their attempts at recreation. Nature becomes an insurmountable force along with the consequences of their newfound union.

Through dreamlike language, Salesses toys with our human need to control forces that are larger than us: the flood, secrets, the past, disease, the inevitability of the reality one creates for one’s self. The novel holds a meditative, reflective pace. As we encounter Tee in Prague and a recovery center in Boston after the flood, shuttling between the two narratives, Salesses artfully places Tee’s disjointed life back together. “In Boston, in the rehabilitation center, Tee would try to figure out what had happened to him,” Salesses writes. A simple turn of phrase, but aren’t we all at some point trying to figure out what happened to us?

The idea of a flood permeates all cultures; it’s a universal symbol for myriad things identifiable in myths, fables, and sacred texts. Salesses tells me that he was drawn to the idea “of a visible sign of a larger force.”

“In exploring the weight of the past in a place where the past is still present, I think partly there’s an instinct to set the book in a time when the present had a large hand in changing the past as well,” he says, referring to the flood that irrevocably alters the look of the city. This theme of sudden change is also echoed in Salesses’ treatment of secrets, the past, and disease.

The Hundred Year Flood happens to have diverse characters in its primary roles: Korean-American and Czech characters, for example. “I think there’s a way that the industry pushes more toward a ‘diverse diversity,’ ”Salesses says. He sees more books being published where a reader’s recognition of the diversity of the characters isn’t really the point: “the diversity is just a part of life,” he says. The Hundred Year Flood is truthful in the essential representation of its characters, that of real people doing real things who happen to be of varied origins and ethnicities.It’s refreshing and Salesses never hits you over the head with his characters’ diversity, but at the same time you’re never lost to the fact that the vantage you’re gaining is unique.

The Hundred Year Flood deals in Czech myth, and the myths we create for ourselves. Being an adoptee like his main character, Salesses held onto a myth about himself for a long time, he says. In the novel, he explores how this mythic self-creation juxtaposes with the external myth that takes hold of you.