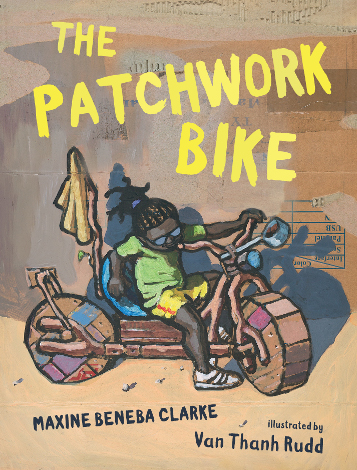 It’s not at all uncommon for a children’s book to include elements intended for the adults who invariably end up reading them. When that book is a collaboration between Maxine Beneba Clarke, the celebrated Afro-Caribbean Australian writer and slam poet, and Van Thanh Rudd, the award-winning street artist of Vietnamese and Australian descent (he is also the nephew of former Australian prime minister Kevin Rudd), it is perhaps inevitable that that book, The Patchwork Bike, be more than your everyday picture book.

In her 2013 collection of short stories, Foreign Soil, Clarke writes about a connection formed between two women over a bike. She got the idea from a documentary about a refugee camp on the African continent. “There was a reporter, and in the background, I saw these kids riding a contraption made of wood and bits of tin can—anything you can imagine, really. It took me a while to realize that it was actually a bike.” That image stuck with Clarke for a long time, and eventually she realized that she wanted to lift it out and create something about it for children.

“Every kid has a story about a bike, about their bike or a bike they’ve had or a bike they want,” she says, speaking from years of experience hosting workshops on the book, which was released in Australia in 2016. She saw that a simple story about children and their homemade bicycle was a theme that had the potential to transcend divides of class and race and region, and that was something she really wanted to do.

Clarke, who is of African descent, has parents who were born in Guyana and Jamaica, grew up in London, and migrated to Australia. Rudd also has a mixed background, which is one of the things that appealed to her about him. There was, however, more to it than that. Clarke and Rudd lived in the same area of Melbourne, and time and again Clarke had been struck by Rudd’s murals and installations that popped up across the city. One that she vividly recalls is a hand reaching out through a barbed wire fence, with the word “refugee” stencilled on cardboard.

“I knew of Maxine through going to poetry slams and [from] other artists and activists that I was around,” Rudd says, but the first time the two met was when Clarke interviewed Rudd for a newspaper profile. It was then and there that Clarke popped the question and asked if Rudd would consider illustrating her children’s book.

“I was really quite hesitant,” Rudd admits, despite agreeing to the job. The two didn’t communicate again for about four months, after which, all of a sudden, Maxine received drafts for the illustrations, painted on cardboard. “I was instantly like, This is it, this is the book.” Clarke recalls. “There's no doubt that this was the right person.”

Clarke had given Rudd the text for the book and the short story from Foreign Soil from which it was inspired, but she gave him complete freedom when it came to his craft. Working as he was at the height of the Black Lives Matter movement, he says that the racial history and tensions of the United States heavily influenced his process. The book depicts issues of poverty and recycling, of making do with what you have at your disposal, but Clarke says that the book’s genesis wasn’t in and of itself inherently political. “What I loved about Van's work was his essentially laying a second narrative over the top of my text,” one where black children are seen dancing atop police cars and homemade bikes have homemade plates reading “BLM.”

With Clarke’s delicate prose and Rudd’s evocative illustrations printed on cardboard paper, The Patchwork Bike depicts “a blazing-hot world readers can almost step right into,” our reviewer writes. It’s also an important introduction to race, to poverty, and to resilience. “I think we were initially surprised when we got calls to do workshops on recycling,” Maxine admits with a laugh. “Yes, it’s a theme, but we didn’t realize it would be a primary takeaway given the other context. It just goes to show that people will take completely different themes away from this book depending on what their experiences in life have been.”