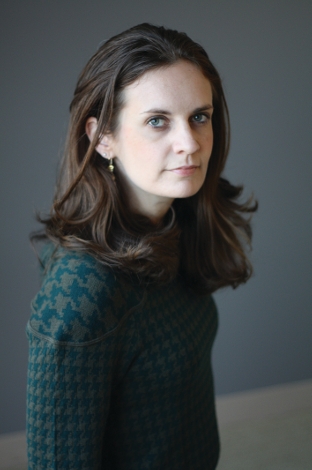 Merritt Tierce’s first completed short story took her so far into her career, it’s almost hard to believe. After the story, “Suck It,” was first published in the Southwest Review (whose editor was then Ben Fountain), it was later anthologized in the 2008 edition of New Stories from the South, selected by ZZ Packer. “Suck It” then got Tierce into Iowa’s MFA program, and finally, it became the kernel for her first book, Love Me Back.

“I don’t know how much mileage one person can get from a story,” Tierce says, laughing. “But it did a lot of work for me.”

Tierce says the story was always “the chapter that anchors the book.” As she continued to write stories, the upscale Dallas steakhouse and cast of characters from “Suck It” hung around. “I didn’t realize I was writing a book until fairly recently into the chronology of the whole thing,” Tierce explains.

Originally, Tierce saw the book as a collection of short stories. “Then when my agent sold it, she quite adeptly I think didn’t say whether it was stories or a novel—I think it was presented as a ‘debut book.’ So then she sold it as a novel, and it really wasn’t that difficult for me to think of it as a novel, just because the stories were already so connected.” Tierce wrote interstitial material after the book had been sold—“to provide some connective tissue.”

And that tissue does indeed connect Tierce’s startling, full-throttle stories and her wholly unsentimental prose, to incredible effect. Love Me Back follows its narrator Marie, a waitress in an upscale Dallas restaurant and single mother, as she navigates internal and external worlds that often seem equally brutal. And yes, Tierce says, she really did work in a fine dining steakhouse in Dallas, and much of the story is autobiographical.

But she hesitates about how to talk about the fact that the novel is based on her own life: “I’ve spent a lot of time thinking about how it’s this autobiographical story,” she says. “I don’t want to be coy, I don’t want to be judged, and it’s hard to find an answer that satisfies both of those.” She adds, too, that she doesn’t distinguish much between fiction and autobiography or memoir anyway: “The way I live is in the constant mode of observation and analysis, of myself and everyone around me, and that is what the narrator of this book does too, but the distance between the narrator and me is significant.”

Still, she says that before the final manuscript was even accepted, Doubleday’s legal team advised her to “change some tattoos, things like that.” The book is about a world that is fast-paced, unremorseful, filled with graphic sex and drugs alike. And that also provided some challenges for Tierce—but only after the fact. “I wrote every story just as it came to me and I didn’t censor it, but it’s only when I’ve been invited to read in public that I’ve been aware of how graphic the book is,” Tierce explains. “I’ll pick a passage or story to read, and I’ll think, ‘I’ll read that one, there’s not too much sex in that one,’ but then I read it and I’m like ‘Holy shit, I can’t believe I just read that in front of 40 people.’ I told my daughter she can’t read the book until she’s like 40.”

But the fact that Tierce didn’t censor her writing is what makes Love Me Back astonishing and so honest that it feels like a gift. “I don’t put any restrictions on my writing,” Tierce says. But she adds that what she’s working on now has very little to do with the actual events of her life: “This might be that book that I talk about writing for the rest of my life, but I do have a pretty advanced idea for a book that has nothing to do with me personally,” Tierce says. “It’s very different: It’s dystopian fiction featuring kangaroos. It has to do with the liberation of women and the key role that the reproductive capacity plays in keeping women subjugated and second-class, so the main character in the book is a female geneticist who outsources her pregnancy to a kangaroo.”

Whether staying close to home or far-flung into dystopian futures unimagined, it will be a privilege to see where Tierce takes her mastery of prose next.

Jaime Netzer is a fiction writer living in Austin. Her stories have been published in Parcel, Human Parts and Twelve Stories and are forthcoming in Black Warrior Review. Find her on Twitter.