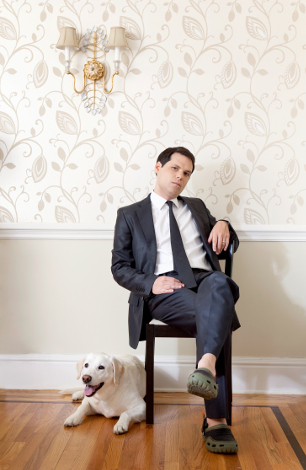 Michael Ian Black’s job is to be funny, mostly in front of a camera or on a stage. In 2015, he was on three separate TV shows or series: The Jim Gaffigan Show on TBS, Another Period on Comedy Central, and Wet Hot American Summer: First Day of Camp, with many of his past cohorts from the MTV sketch comedy show The State, on Netflix. Just before he picked up the phone for this interview, he was editing a new stand-up comedy special, which he anticipates will be out sometime in mid-2016.

But writing for the printed page is becoming an increasingly more substantial part of what he does. In January, he released his third book of essays, Navel Gazing: True Tales of Bodies, Mostly Mine (But Also My Mom’s, Which I Know Sounds Weird). In October, he released Cock-a-Doodle-Doo-Bop! , his sixth children’s book, and he has a seventh coming out later this year.

To Black, it’s all writing. “It all is of a piece,” he says. “I mean, I write books and I write television shows and I write stand-up comedy…I do a lot of writing.”

There is a creative restlessness at work in Black’s career. It’s not that film, television, or writing for print aren’t fulfilling, but there is a lot of down time in acting that allows Black to concentrate on more than one thing at a time. And he feels a certain agitation if he stays in one place too long. “Everything I do, I enjoy while I’m doing it and then I start to get sick of it and then I’m glad to be able to put it down and pick up something else,” he says. “Which sucks in a way because it makes me feel like a bit of a dilettante, and I don’t like that feeling. But I also know that for me to stay happy in my life, professionally, it’s important for me to be able to do a bunch of different things.”

In his earlier stand-up and on shows like I Love the 80s, Black cultivated a self-important, snarky persona. That tone appeared in his early writing, as in his first book, from 2008, My Custom Van: And 50 Other Mind-Blowing Essays That Will Blow Your Mind All Over Your Face. He has since matured as a stand-up and especially as a writer. That vanity is still a part of his sense of humor, but it’s juxtaposed with more serious, even earnest fare in his essays. “It was sort of the bluntest tool in my toolbox when I started, and since then I’ve learned to use it less,” he says. “Now it’s one tool of many. I still find that stuff funny, that sort of faux bravado; that’s still funny to me. But I use it less and less.”

The different forms of writing help to inform each other and make Black a better writer. Of all the plates he has spinning now, he finds himself drawn to more serious writing. “As a writer, I’m more interested in prose right now,” he says. “I like doing stand-up and I like performing stand-up, and I’ve lately found myself sort of injecting more literary elements into my stand-up. But from a purely writing point of view I’m more interested in prose and being less overtly comedic.”

His previous book of essays, You’re Not Doing It Right: Tales of Marriage, Sex, Death, and Other Humiliations, was a revelation. There was a depth to that collection that might have surprised the casual fan. He takes that further in Navel Gazing, which is about Black’s struggles with aging and body image, intertwined with the story of his mother’s battle with cancer. The opening line is a grabber – “ ‘Oh shit,’ you might think, ‘I am going to die.’ ” Black writes with a sharp self-awareness and a deft comic touch, covering family identity, mortality, vanity, and even the existence of a supreme being.

The main hurdle in writing Navel Gazing, after he got his mother’s blessing to proceed, was figuring out how to balance the humor with the weighty nature of the subject matter. “The difference between stand-up and what I write anyway in prose is, stand-up is really all about just generating laughs per minute and trying to get as many laughs in as compressed a time as you can,” he says. “And I don’t feel that same pressure with writing prose. If anything, I tend to underwrite the comedy in my prose because it’s (to me) the least compelling part. Sometimes I have to remind myself that people expect me to be at least a little bit funny. And so I have to sort of make sure that I am being funny.”

Writing children’s books, on the other hand, is about pure fun. They’re a relief from writing prose. Black likens the process of creating them to writing sketch comedy. “They’re self-contained,” he says. “They’re brief. They’re fun. You can kind of paint a big world in a small amount of space. And I write funny ones. I write silly ones. I like having a place to just be silly, and I think children’s books are a good place to do that.”

Black will sometimes take a day to try to write a couple of ideas for children’s books to pitch to his editor. “I feel like if it’s taking much more than a few hours to write, chances are it’s not very good,” he says. “And experience has borne that out.” He has written plenty that will likely never see the light of day, which doesn’t upset him. “I tend not to be very precious about this stuff,” he says. “I have a good relationship with my editor, and if he’s like, ‘Yeah, I don’t think so,’ then I’m like, yeah, all right, I’ll just write another one.”

It’s a fortunate thing, to Black’s way of thinking, that he is well-known enough to have an audience, but not so big that he has to conform to a particular expectation of what he does. That gives him the freedom to not have to cater to anyone and keep pursuing his own voice. “You don’t know what they’re going to like and what they’re not going to like,” he says, “so all you can do is be true to yourself.