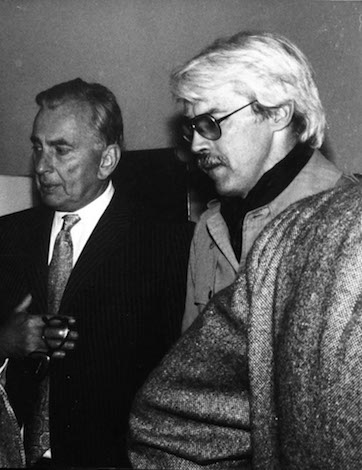 Domineering and defiant to the very end, Gore Vidal offered no ambiguity to the ways in which he was to be perceived. It was a carefully curated image he cultivated, replete with patrician airs and a detached sense of imperviousness. “Style,” the writer and public intellectual once offered, “is knowing who you are, what you want to say and not giving a damn.” His memoirs further entrenched the public’s perception that he had an icy disposition; with a reputation for lashing out at opponents with an unforgiving swipe of his pen or even sharper cut of his tongue, few sought to challenge Vidal’s own self-assessment.

Michael Mewshaw, however, was one of them. An introduction in Rome would lead to nearly 40 years of close friendship, and over that expanse of time, Mewshaw was commissioned by various publications to interview the famously prickly personality. At times he tried to weave in a more holistic portrait of Vidal, although it’s one he admits was often at odds with the angle his editors sought. His latest book, Sympathy for the Devil: Four Decades of Friendship with Gore Vidal, takes his critique of Vidal’s legacy even further.

“It wasn’t so much to challenge Gore’s version of himself as it was simply to present what I hoped was a more complete and a more sympathetic and a more coherent picture of his life,” Me wshaw says. “You know, he was someone that I liked, that I cared for, who I think often presented himself in an extremely unflattering light…and I wanted to give an idea, a realistic idea, of the way he was when you were around him, when he wasn’t on stage or in the spotlight.”

In the book, Mewshaw comments on the liberties Gore took with his memoirs and how, through omissions and embellishments, he tried to give his legacy a definite and unmalleable shape while still alive. What then, I asked, would he have made of Sympathy for the Devil? That question elicits a brief but hearty chuckle.

“All the years, the decades I knew him, he never acknowledged having read anything I had written,” Mewshaw begins. “Nothing. No book, no article, no review, not even interviews with him. He would say, at most, ‘My sister liked it,’ or, ‘Howard [Austin, Vidal’s longtime partner] read it and was amused by it.’ Or, ‘Somebody tells me your new novel was very interesting.’ It’d be conceivable that he would not have even read [Sympathy for the Devil], or acknowledge that it had been written. It’s hard for me to believe, or something that I wouldn’t want to believe,” he adds, pausing briefly, “but it’s quite possible.

“But if you’re asking me if he would like it that I often presented him as being drunk, or that he’s passing out, or that he frequently

seemed to me like a poor waif who was rejected and took those rejections really hard—I think that’s probably the thing he would object to most. Not that he was drunk, not that he was rowdy, not that he passed out or called some woman a cunt, but that in moments of vulnerability he showed himself to be someone who was quite stung by the kinds of rejections…that he felt were people’s attempts to erase him from the literary map.”

Mewshaw certainly does challenge more traditional views, like that of Fred Kaplan in his official biography of Vidal, that while he drank heavily in his later years, he was rarely seen publicly intoxicated. “I’ve heard other people say the same thing,” Mewshaw says, “and maybe they didn’t [see him drunk]. But a lot of other people did.” The man in Sympathy for the Devil is not the refined stoic Vidal attempted to characterize himself as, but a “prodigious drinker,” “a knee-walking, falling-down drunk for at least the last 20 years of his life.”

Yet while unapologetic about the truths he reveals, the flaws that add a depth to the understanding of Vidal as a man rather than a persona, it’s not the negatives that Mewshaw employs to remember his late friend. “Mostly, it’s his humor, the acuity with which he spoke about public or political affairs, and his generosity.”

And how would Vidal feel about Mewshaw writing about his generosity and kindness?

“I think he would just have been dismissive of it. I think he would have had some arch expression where he said, ‘No good deed goes unpunished,’ ” Mewshaw says. “He was not impervious to praise or appreciation, but I think basically he tried to give the impression that he didn't care what other people thought and that he was a world unto himself. So I can't help thinking that Gore wouldn't have been wildly enthusiastic about my book, but I think, basically, he wouldn't have said anything. It would have been Atlas shrugging.”