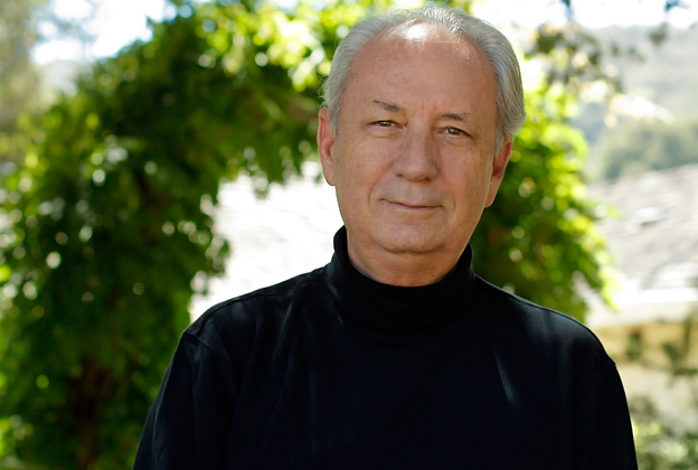 Michael Nesmith’s first big job in the music industry didn’t make much sense to him. He was hired—along with Davy Jones, Micky Dolenz, and Peter Tork—to be part of a rock and roll band on television called the Monkees. It would change his life in ways he couldn’t quite comprehend. He addresses this in his new memoir, Infinite Tuesday: An Autobiographical Riff. In one story, Nesmith writes about driving to work shortly after the show began. He was recognized by a woman crossing the street when he was parked at a red light. The woman threw herself on the hood and started screaming his name. Then she composed herself, got up, and walked away as if nothing happened.

“It was a trampoline that I bounced down on and then went higher than a tall building,” says Nesmith of his pop fandom experience, speaking by phone from his home in Carmel Valley, California. “I thought, ‘How did I get up here?’ It’s like, ‘I don’t know.’ And I just left it at that. And I still kind of do. I look at it and think, Just describe what you see and hopefully that will mean something down the line.”

A lot of what Nesmith shares in the book is like that. There is no clear explanation for much of what has happened in his life, from the Monkees phenomenon to his solo career to his work in music videos and in producing films like Repo Man. The stories don’t have a neat beginning and ending or moral. And if they did, he questioned them to the point where he decided not to include them.

“Leave it kind of messy and like it really happened,” Nesmith says, explaining his thinking. “That’s one of the reasons I call them ‘riffs.’ Because they don’t button together. They just sit in the middle of the song and they provide an interlude. But if you put all of them together they’d actually build their own song.”

That’s what Infinite Tuesday is—an impressionistic collection of memories that, when viewed together, create a picture of what it has been like to be Michael Nesmith for the past fifty-plus years. “That’s one of the reasons I avoided the whole autobiography thing,” he says. “I didn’t want to write, ‘And then I did,’ ‘And then I did,’ ‘And then I learned,’ ‘Then I learned.’ I wanted to do something that was like taking a look at the here and there and seeing how they all stacked up if you put them in a pile in the yard.”

Nesmith describes the band’s chaotic early rehearsals when they couldn’t really play the songs as they were on the records, saying they were charming and “would have made a good television show.” “That occurred to me on more than one level,” he says, “is that what’s actually going on here is a more interesting show than the one we’re making.” The picture gets even more fuzzy when he talks about the screaming fans the band played for. “I don’t know what that was,” he says. “There was a kind of an adolescence and anxiety there that was…the picture I have in my mind is a sea of waving pink arms. The noise that that creature made was very high pitched and very loud.”

Nesmith writes mostly about his reactions and not about what his bandmates might have thought or did. One reason for that is that the job was the main thing they had in common. “The fact that there wasn’t a connection was no real surprise to any of us,” he says. They were hired to be a band on TV, he says, “So that’s what we did and we were happy with the job.” The other reason is that Nesmith wanted to preserve their privacy. “I tend to be more private than public,” he says.

That does not mean the book is lacking in detail. It covers most of his life, from his days as a struggling folk singer at the Troubadour in Los Angeles to helping create the idea of a standalone music video just a bit too early to ride the wave that became MTV. And it’s packed with wonderful “riffs” about Nesmith’s friends and people who influenced his music and philosophy. Timothy Leary helps him put his self-image in perspective. Douglas Adams drives like a maniac and tells great stories. John Lennon got a little embarrassed when, playing an early cut of Sgt. Pepper’s Lonely Heart Club Band, Nesmith gushes about how amazing it was. And Nesmith is amazed to hear Jimi Hendrix mention he is thinking of taking singing lessons.

“I all of a sudden thought of Jimi sitting in a classroom on a wooden chair with a singing instructor at the blackboard with a baton and glasses on the end of their nose,” says Nesmith. “That’s what made me say, Are you nuts? Are you crazy? You’re the greatest rock and roll singer of all history right now. What could you possibly change that would make it better? And that didn’t sway him at all. He said, ‘Well, I feel like I sing a little flat. I want to get my pitch better.’ ”

There is great joy in the telling of these stories, and a sense that Nesmith has learned to embrace what is beyond his control. “I love the quote in Repo Man, ‘it’s all part of the collective unconscious,’ ” he says. “The whole idea of a collective unconscious just makes me laugh. I can riff on that, but I don’t want to discuss it philosophically. It does have a philosophical ring to it, but it’s funny on the face of it to me.”

Nick A. Zaino III is a freelance writer based in Boston covering the arts for Kirkus Reviews, the Boston Globe, BDCWire.com, TheSpitTake.com, and other publications.