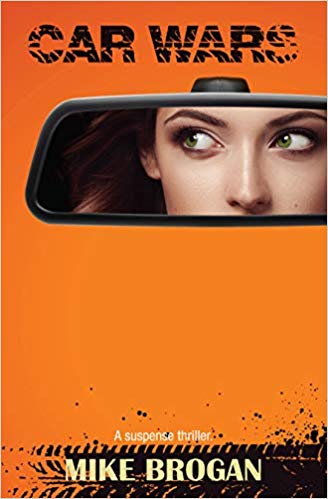 Mike Brogan’s a man of many talents: author, adman, car guy. The former creative director of an advertising agency, Brogan ran the General Motors account for years, writing such memorable ads as “Baseball, Hotdogs, Apple Pie and Chevrolet.” Now retired, he splits his time between Michigan and California, channeling his creativity into fiction. Brogan’s latest is Car Wars, a thriller about corporate intrigue and the dangers of modern technology. In its review, Kirkus calls it “both topical and frighteningly realistic” and a “tight, entertaining story with a convincing, real-world menace.”

Car Wars is Brogan’s eighth novel. As in previous works, Brogan draws on professional experiences to construct a taut and timely thriller. But his latest has another source of inspiration: a TV news story on car hacking. The segment showed two technicians in one car remotely taking control of another. “They could steer, brake, and accelerate the other car,” says Brogan. “I thought, ‘Holy crap! What if a bad guy had that ability to take over another car?’ I realized it could happen: These new cars are basically computers on wheels. They can be hacked.”

That’s how Car Wars begins, with a nefarious car-hacking scheme. The protagonist is Madison McKean-Jordan, who also starred in Brogan’s 2010 release, Madison’s Avenue. In Car Wars, her ad agency, Turner Advertising, has just won a huge contract with Global Vehicles, a big-time auto producer. Madison will be overseeing the “XCar” campaign to promote a new line of high-efficiency, Wi-Fi–enabled electric cars. And it’s through the Wi-Fi, or more specifically, the On-Board Diagnostic System port, that an attacker can take control of the car.

Which the attacker does. Several times. His name is Robert Bruner, and he’s an ex–GV employee with a long-simmering grudge. The scenes of Bruner hacking the cars of unsuspecting drivers are some of the novel’s most intense and gripping. In them, Bruner shows his aptitude for sparking chaos and his appetite for sadism. In one scene, he toys with his victim, Karl Hardmunn, an Iraq vet with post-traumatic stress disorder:

[Bruner] counted to three and tapped Enter on his laptop.
Instantly, Hardmunn’s BMW surged ahead at breakneck speed. Bruner imagined Hardmunn’s panic. The man had no idea what had happened, and no control of his speed….
Bruner deactivated Hardmunn’s braking system. Now the poor bastard had no brakes.
Then Bruner took over the BMW steering. He gave Hardmunn a couple of left right squiggles.
Hardmunn was now in full-blown, eye-popping, what-the-fuck panic.

Bruner isn’t acting alone. His backers are a scheming oilman and an executive at AsiaCars, a company that relies on the sale of gas-powered cars. Together, they aim “to protect the traditional auto industry at all costs.” Of the three primary villains, Bruner emerges as the most sympathetic. Damaged beyond repair, he wants others to know a fraction of the pain he’s experienced. When Madison enlists the help of her friend Brooke Daniels, an engineer at GV, the two begin to piece together clues pointing to a deadly conspiracy. Meanwhile, Bruner and his backers get more desperate to bury the sleuthing women and sink the XCar.

Brogan admits he likes his villains. He knows they have to have something driving them other than inherent evil. “You can have a crazy guy, but somehow in the midst of that you’ve got to sow some humanity,” he says. He goes on to quote Elmore Leonard, another adman who found his calling as writer. When their paths crossed, Leonard gave Brogan some advice: “Mike, spend more time with the bad guys—they’re much more interesting,” Brogan recalls him saying.

Brogan is adept at exposition, giving detailed summaries of characters’ motives and providing the context and backstory needed to experience the novel’s scale of danger. To show the thinking of the ill-willed auto and oil executives behind the XCar sabotage plot, he writes that they “could lose everything if electric cars…turned gas vehicles into the buggy whip collapse of this century.”

But Brogan says he used to struggle with the details. “In an early work, I went on for three pages, describing a staircase and a bannister,” he laughs. Brogan realized too much exposition can cause the story to lag. He also discovered that his preferred mode is propulsive. “I tend to be fast-paced,” he says. He’s not kidding: Car Wars is full throttle.

Brogan predicts that as cars continue to evolve, new problems will crop up. “I know from working in the car business that there’s a lot of pressure to get those cars out on time,” he says. He has a new car himself, with “a lot of stuff going on. It’s like Tokyo by night when I turn it on.” And a modern car means modern problems. Car Wars speaks to that anxiety—Brogan’s, for sure, but a broader cultural anxiety as well. “Technology is taking over more and more of our lives,” he says. “We’re more and more dependent on it.”

Brogan has always been drawn to the thriller genre. While he admires fellow practitioners such as Lee Child and Nelson DeMille, his favorite writer is John Grisham. “He gets after the big issues.”

That’s what Brogan aims to do, too. Having written a thriller that takes on big auto and the world of advertising, he’s setting his sights on a new subject. “The book I’m writing now has to do with the unfairness and inequality of health care in the United States,” he says. The only problem with the topic? Too much material and a wealth of evidence. “Seventy million people are hurting,” says Brogan. “I’ve found far too many stories that make you ill to think about.”