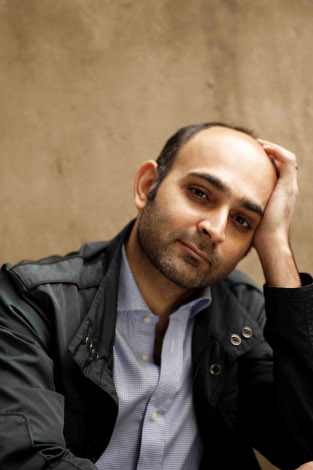 The key to understanding Mohsin Hamid’s slim, stunning new novel is in the doors.

“Rumors had begun to circulate of doors that could take you elsewhere, often to places far away, well removed from this death trap of a country,” Hamid writes in Exit West, an extraordinary love story that opens in an unnamed country under siege by militants.

“Some people claimed to know people who knew people who had been through such doors. A normal door, they said, could become a special door, and it could happen without warning, to any door at all.”

These special doors have the power to teleport refugees—including Saeed and Nadia, the young couple whose relationship is the book’s beating heart—to geographic locations thousands of miles away. They may be portals to a better life or to an existence as insecure as the one being fled. In an otherwise realistically told story of love, loss, and global migration, they are the one fantastic element. A bit of magic, if you will.

“I think those doors kind of already exist,” says Hamid, whom we reached by phone in Lahore, Pakistan. “We seem to leave our houses and be in different parts of the world almost instantaneously—drive to the airport, get on an aircraft, and fly. Also, we have these rectangles we communicate through—computers, phones. You and I were supposed to be having a [Skype chat], looking at each other through screens. I’d be seeing you and you’d be seeing me, like a window was open between us.

“Today,” he continues, “the scope of human movement happening all over the world is on such a scale that it feels almost magical, miraculous, or terrifying, depending on your take on it. So the doors became a way to describe a reality that actually exists in a way that feels true to that reality, even if it’s not true to physics.”

Hamid has lived half his life in Lahore, with significant stretches in London, New York, and California. He is the internationally bestselling author of the novels Moth Smoke, The Reluctant Fundamentalist, which was shortlisted for the Man Booker Prize, and How to Get Filthy Rich in Rising Asia—works that have been translated into more than 30 languages. He is the author of dozens of essays, on topics ranging from war and peace to fatherhood, published in the New York Times, the New York Review of Books, and the New Yorker, collected in Discontent and Its Civilizations: Dispatches from Lahore, New York, and London.

In some ways, Exit West represents a departure from his earlier novels: it eschews a complicated formal structure. At times, it employs rhyme and repetition in an almost incantatory manner. And the propulsive third-person narration establishes an easy intimacy with readers—a style Hamid considers akin to that of certain children’s books.

“A lot of the choices I made in this novel, including its small size and the way it addresses itself to the reader, were choices to enable access,” he says. “I’ve come to the view that maybe I was assuming too much about other people and how they read, so I thought to try to assume nothing, build something from the ground up. We’ll see what happens when people read it, but my idea was to try to write a book [that could be enjoyed by] people who don’t [regularly] read novels, all over the world.”

Indeed, the boy-meets-girl beginning of Exit West offers a timely take on “Once upon a time....”

“In a city swollen by refugees but still mostly at peace, or at least not yet openly at war, a young man met a young woman in a classroom and did not speak to her,” Hamid writes. “His name was Saeed and her name was Nadia and he had a beard, not a full beard, more a studiously maintained stubble, and she was always clad from the tips of her toes to the bottom of her jugular notch in a flowing black robe. Back then people continued to enjoy the luxury of wearing more or less what they wanted to wear, clothing and hair wise, within certain bounds of course, and so these choices meant something.”

The choice Nadia and Saeed make to formalize their mutual attraction so swiftly, despite their divergent backgrounds and personalities, is undoubtedly enabled by the militarized conflict waging on their city’s streets. And the difficult decision they make to flee draws them even closer, for a time.

“Very often we don’t consider just what people must be facing to drive themselves to leave the place they come from,” Hamid says. “We think, Oh, it’s so easy to be an economic migrant, to go to a place where life is better, where there are more jobs, more safety, etc., but the truth is it’s much more difficult than that, leaving one’s friends, one’s family, the place where one grew up, one’s native language, sense of humor, favorite songs behind.

“We think so often of the people who came to America for many centuries—from Europe, from all over the world,” he continues, “—and they came with such optimism and excitement, but they also came with a tremendous amount of sorrow, nostalgia, and sadness. For many people, it wasn’t simply a dive into this wonderful future, it was being forced to break bonds by terrible circumstance.”

On their first passage through a transporting door, Nadia and Saeed arrive in Mykonos, Greece, which is teeming with refugees from around the world. Despite the bleakness of such circumstances, their subjective experience illuminates the humanity of the camps: there is still love and laughter between them and the mundanities of the everyday.

“Days passed like this, full of waiting and false hopes, days that might have been days of boredom, and were for many, but Nadia had the idea that they should explore the island as if they were tourists,” Hamid writes. “Saeed laughed and agreed, and this was the first

time he had laughed since they arrived, and it warmed her to see it....”

“[Refugees] are, in a sense, in a heightened human state,” Hamid says. “Those things that we all share—the losses, suffering, and pain, the moments of shock but also the laughter and moments of affection—are magnified, happening more rapidly and intensely, but still the predicament. So we shouldn’t be surprised that people are still human in those circumstances.

“As far as thinking of [refugees] as the other, one of my hopes in writing this book was to explore with the reader the possibility that maybe all of us are refugees,” he says. “Maybe, in some way, to be a refugee is the universal human condition, and we can recognize in them something that’s true about ourselves.”