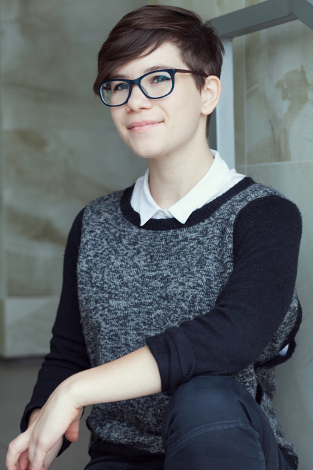 Molly Knox Ostertag’s The Witch Boy is one heady brew of a debut—mixing fantasy, reality, family, and identity in a magical middle-grade graphic novel.

This colorful adventure story stars Aster, a sweet and gentle 11-year-old boy with brown skin, red hair, and expressive eyes, whose aptitude for witchery is incompatible with family tradition.

As his white mother, Holly, explains, “Women and men have different types of magic,” Ostertag writes, “and witches pass down their knowledge from mother to daughter. That’s how it is and how it’s always been, my son. But it’s not like there’s nothing for you! Soon your shapeshifting will begin, and with it, the ability to see demons and to fight them. You’ll be one of the men.”

For Aster, it’s hard to say which is worse: being prohibited from performing incantations or being forced to seek out animal spirits (to teach him the secrets of shape-shifting) on all-male expeditions into the woods.

“Things start getting weird and scary,” Ostertag says, “when boys from the family start disappearing in the woods and reappearing turned into these twisted monsters. So there’s a bit of a mystery going on, and Aster is the only one, it turns out, who can solve it and help save these boys.”

The Witch Boy is Ostertag’s first book as an author/illustrator and first work for young readers.

She is perhaps best known as the illustrator of the superhero webcomic Strong Female Protagonist, written by Brennan Lee Mulligan.

“If you’re doing a [LARP] adventure, sometimes you have to be ‘random goblin No. 5,’ ” she says. “If you’re acting that out for hours, you’re like, ‘What is random goblin No. 5’s back story? What’s their motivation? What do they want? Do they weep when their other goblin friends are killed?’ I’m really interested in that kind of story.”

Stymied in exploring his interests at home, Aster wanders beyond the protected family compound into a normal human neighborhood. There, he meets Charlie, an African-American tomboy in braids and a big plaster cast (she broke her leg in a daredevil bicycle stunt). She is the first person to accept him on his own terms.

“Charlie knows exactly who she is and what is right,” Ostertag says. “She’s comfortable struggling against or acknowledging what’s wrong, so she’s a good foil for Aster. I like them as different people who have this important thing in common—they both see each other in the way they want to be seen.”

That wish has been granted. The Witch Boy has been optioned for animation by 20th Century Fox and a sequel, The Hidden Witch, will publish in fall 2018. But Ostertag has a few wishes of her own.

“If I could make a handful of kids feel seen and feel good about themselves, that would be really important,” she says. “If I could help people see each other and be kinder to themselves and other people, that’s what I’d like.

“Also, I’d love if someone cosplayed one of the characters,” she says. “That would make me happy.”