Multiplication, Not Just for White People 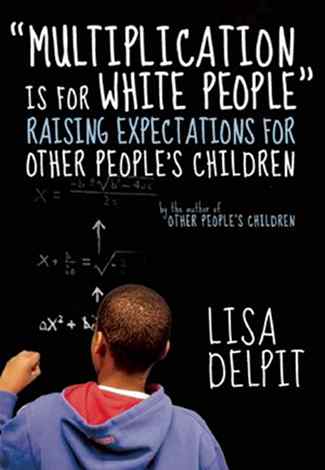 Educator Lisa Delpit offers a scathing critique of America’s education system in her new book, “Multiplication Is for White People”: Raising Expectations for Other People’s Children.

Delpit deftly investigates the ways in which the public education system has disenfranchised generations of African-American children, creating an educational gap that has had severe repercussions in our society. Weaving data and anecdotes from her visits to schools throughout the country, she takes on the institutionalized racism that pervades our school system and tackles weighty issues such as America’s dependence on test-based learning and the profit-driven nature of the charter school movement.

“If we do not find a way to bridge the divide between the haves and have-nots, between white and black, between native and immigrant, then we are ensuring our ultimate demise,” Delpit says. “We are all part of the whole, and no part can be affected without affecting the whole.”

What’s the story behind Multiplication Is for White People?

My work has been about looking at culture in education and marginalized communities in education. The trouble comes from a lot of different sources, among them the attitude of larger society, deeply engrained, that black people are inferior, particularly intellectually. And that’s not just a belief held by white people, but black children as well. It’s been built into our entire belief system.

This book is an attempt to bring some of those unspoken and unacknowledged beliefs to the forefront, an attempt to clarify some of those issues at a time when many people think race isn’t something that needs to be talked about anymore. But in visiting schools around the country, I see that it’s something that needs to be talked about now more than ever.

After Katrina, all of the school teachers, mostly African-American, were fired. A great effort was made to bring in young white teachers, who had no familiarity with the children or the culture. They meant well but were limited in what they could accomplish. These teachers needed to do more than just meet the students’ educational needs, they needed to be equipped and experienced to deal with the trauma these students felt. The charter schools soon became overrun by educational entrepreneurs.

Education has become a new way to make money in America. Because charters are privatized and corporate, you’ve taken away a community’s ability to control its school system. Charters can set their own rules and often manipulate the system to ensure selective admission. The public schools then become warehouses for the remaining children. New Orleans public schools are now the lowest performing schools in the entire state of Louisiana.

Have charter schools been detrimental to education?

Charter schools were originally supposed to provide opportunities for school systems looking to try different things. These schools were ways for educators to try new things and report back to the community what worked and what didn’t.

But because they’ve become market and profit-driven institutions, they’re competitive. They’re not sharing their results, the things that are working. The model is destroying any possibility of improving our school system. They’ve signified a strong move away from democracy and community involvement into a system that’s corporatizing education.

What do you think of programs like Teach for America?

There’s this notion that these young, Ivy League educated graduates are going to swoop in for two years and turn things around. They have no experience and no familiarity with the communities in which they’re being placed. Studies show that it takes four years to become a good teacher.

So, basically, we’re taking our most fragile communities and giving them bad teachers. I don’t want to speak against the intentions of these young people, since many come in trying to do what they can. But they just don’t know enough and aren’t sufficiently mentored. Some of the schools they’re being placed in are the most dysfunctional. Perhaps instead we should be looking to stabilize these schools, building sustainable systems. Temporary placements can often create further divisions.

How do we make education more equitable?

We need to start with a strength-based model. Educators need to look at the strengths of their individual students and the community as a whole and learn to build off of that. We know now that change really happens when teachers collectively look at what’s going on in their schools and collaborate to come up with curricula and programs.

We can’t move forward until teachers work together to create solutions, to share what worked and didn’t with one another. Teachers need to know who they’re teaching and be able to see the brilliance of their students—even if it doesn’t take a conventional shape.

Karen Calabria is a writer and editor based in Long Island, N.Y.