A Consideration of the Lives of African Muslim Slaves 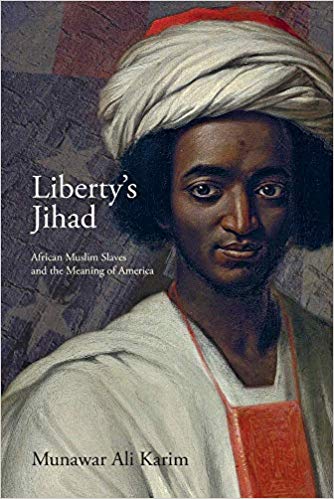 British author Munawar Ali Karim examines slavery in America from a very different perspective in his debut nonfiction book, Liberty’s Jihad: African Muslim Slaves and the Meaning of America, which reveals the little-known stories of three African Muslim slaves who were all literate and devout followers of Islam. He demonstrates why they threatened the very notion of slavery in American society, and he honors their deeply held faith by making spirituality one of his book’s central themes.

Karim, who grew up near London and now works there as head teacher in a Montessori school that he founded, embarked on a scholarly mission nearly two decades ago to craft this book. He left the United Kingdom for several years to work in international relations in Japan; while there, he studied Shorinji Kempo, a Japanese martial art, and deepened his understanding of spiritual teachings within the ninjutsu, samurai, and Sufi traditions. After his return to the U.K., Karim continued to pursue his studies of Eastern traditions.

He began his project as a post-graduate thesis shortly before Sept. 11, 2001. It evolved into a full-length manuscript, but when the 9/11 attacks resulted in widespread prejudice against Muslims, Karim decided to put his writing aside. Still, he says, “the book was in the back of my mind all the time.” Years later, after Karim had researched the life of an African Muslim slave named Ayyub bin Suleiman, anglicized as “Job Ben Solomon,” he came across Suleiman’s portrait, which appears on the book’s cover. Karim saw it as “a sign” that he needed to finish his manuscript. An 18-year delay worked to his advantage, because post–9/11, things happened “that have informed what is now the book”—specifically, increased Islamophobia in the Western world, and he thought that his book might help readers see Muslims differently. In addition, contemporary books, such as 2017’s Never Caught by Erica Armstrong Dunbar, and movies, such as 2019’s Harriet, have highlighted the subject of slavery, and politicians are talking again about reparations to slaves’ descendants.

Until recently, African Muslim slaves have been a historical footnote. According to Kirkus’ review of Karim’s revealing study, “the author sheds light on a long-overlooked corner of the American experience” by “examining their narratives and highlighting their relationships to their faith.” Why were they largely ignored by early historians? Karim says that the African Muslim slaves challenged white stereotypes with “the dignified way they dealt with the difficulties they faced,” always maintaining their strong cultural identity and sense of self. He asserts that African Muslim slaves challenged white people’s common assumption that all slaves were uneducated savages. Their intelligence and piety, he asserts, alarmed white slave masters, although some appointed them as drivers and overseers. African Muslim slaves also became part of abolitionist arguments, he says, because “they challenged the underlying assumptions that allowed people to justify slavery.”

Karim celebrates the heritage and courage of African Muslim slaves in his book, demonstrating how they stayed true to their Islamic roots. The author, a Muslim who studies the Islamic faith, asserts that being a slave takes on a different meaning for followers of Islam: “there is the slave who acknowledges his helplessness before God, surrenders himself completely to Him and entering into a state of Islam—literally ‘submission’ or ‘surrender’[—]becomes the willful servant of the Creator and so attains to ‘peace’ (another of the meanings of the word ‘Islam’).” Even as slave traders and owners brutalized them, African Muslim slaves piously proclaimed their devotion to their faith in Quranic Arabic writings which followed a formal, specific structure. Karim mirrors this structure with his modern-day interpretation; the book is divided into three parts, represented by Arabic letters and comprised of 13 chapters, as is one of the slaves’ written manuscripts.

Kirkus Reviews notes that Karim’s “prose is scholarly without being dry, and during the slave narratives, in particular, he reveals himself to be an adept storyteller.” He carefully recounts the stories of his three subjects, enriching them with intimate detail and insightful observations. For example, he characterizes the highly educated Suleiman as “well prepared to confront a world radically different from his own—a world and an institution which believed and acted upon the belief that Africans were barely human, let alone civilised.” Karim writes that, in America, Suleiman was befriended by Thomas Bluett, a white Englishman who assisted in his emancipation and accompanied him to England. Bluett also wrote about Suleiman’s life in slavery, referring to him as an “African gentleman.” In England, Suleiman was admitted into the exclusive Gentleman’s Society of Spalding, which counted Isaac Newton and Alexander Pope as past members; later, he returned to Africa. Karim also tells stories of ‘Abd al-Rahman Ibrahima, a nobleman from Guinea; and Mali-born Salih Bilali.

To add context to the three accounts, Karim deftly weaves modern elements into the work. He discusses how the Muslim heritage of many African slaves re-emerged during the civil rights era in speeches by such figures as Malcolm X. He also relates their struggles to current times, referencing contemporary Muslims, such as political activist Khizr Khan and U.S. Rep. Ilhan Omar.

The author’s broader purpose is to help readers see what African Muslim slaves “can teach us about human nature,” Karim says. “We have to look at the ‘Other’ honestly. We have to pull ourselves deeply into the perspective of the Other. By doing that, we can learn something about ourselves.

“I think of the book as a meditation on the self,” Karim continues. “It’s a spiritual book that I hope focuses the reader on more than just the tangible and mundane things that we see around us.” In his book, he writes:

I deliberately arranged the work in a way that points to meanings beyond the surface text. Meanings that can only be discovered when they are consciously sought out using the epistemology of the Qur’an and the Islamic tradition itself. This is what the African Muslim slaves seemed to have been doing quite consciously in their writings.

In the end, Karim sees Liberty’s Jihad as more than merely a historical account of African Muslim slaves in America: “Writing this book shows me what we can do wrong as human beings but also how we can redeem ourselves,” he says.

Barry Silverstein is a book reviewer and nonfiction book author.