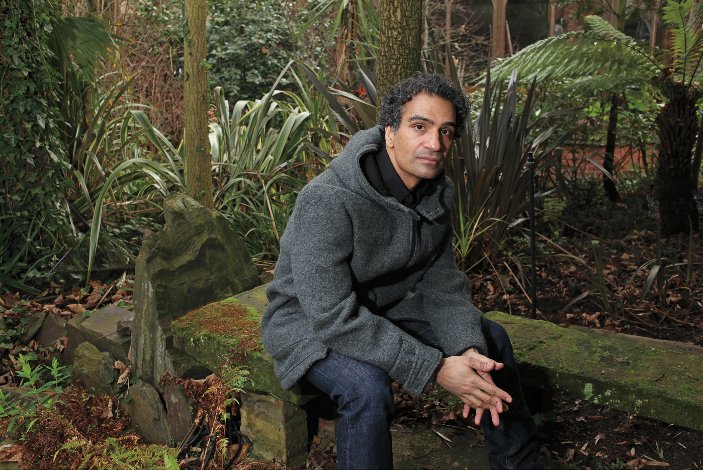 Lahore, Pakistan, is a place of almost unfathomable loveliness. It is, says the British novelist Nadeem Aslam, who was born in a neighboring town 50 years ago, “a beautiful city with scars going through it, a beautiful garden surrounded by barbed wire.” And it is a place where much of the world’s future may be written out, a place of longing, aspiration, fear, and violence.

Aslam, whose 2013 novel The Blind Man’s Garden wedded elements of ancient folklore with the darkest news from Afghanistan, began writing his newest novel, The Golden Legend, at the beginning of 2011. He was inspired to do so not by events in his homeland, but instead something that took place in a place he did not know: Tucson, Arizona, where a young man attempted to assassinate U.S. Representative Gabby Giffords and killed six other people, including a nine-year-old child.

Speaking to Kirkus Reviews from his home in northern England, Aslam recounts that he had been working on the outlines of a story in which religiously motivated revenge killing played a part. What happened in Arizona immediately deepened the story. “I realized that my story wasn’t going to be strictly about blasphemy,” he says, “but how we can disagree. What means are allowed to you if you disagree with someone? Are you allowed to use violence? Can we disagree without killing each other?”

Other real-life events came into play, including the Charlie Hebdo attack in Paris four years later. They came into play even after the book was finished: at about the time advance reviews were beginning to appear, including our own, a suicide bombing occurred at a shrine in Pakistan. It was eerily like a bombing that is central to storyline of The Golden Legend, and it speaks to Aslam’s conviction that “if we continue on the path we are on, then this is the logical result.”

Aslam’s newest novel, his fifth, is set in a place called Zamana, a mythical but very real city whose name means “the times” or, by extension, “zeitgeist.” There Nargis, a middle-aged woman and renowned architect, has been grappling with something disagreeable herself, a secret that is bursting to leave the privacy of her home. Her Christian housekeepers have been cowed into silence by a terrible murder committed by a newly pious Muslim, even as Muslims are killed by others—including Americans, one of whom is involved in a firefight that kills her own husband, an accidental bystander. Soon Pakistani military intelligence agents are at Nargis’ side, demanding that, for the sake of international diplomacy, she forgive the “large healthily built white man.” If she does not, the implication follows, then they know her secret, too, and they will use it to destroy her.

In the face of that assault, Nargis comes to see the world through different eyes. Her favorite retreat is a place that has seen churches and mosques and temples stand side by side in amity, buildings long abandoned and now ruined in a world where violence and division are the norm. “Which God or Gods had built that world?” she thinks, a question that of itself would earn her terrible punishment if asked in the wrong company. Can she begin to forget? Can she forgive?

“By calling her city Zamana,” says Aslam, “I was trying to signal that while this story is set in Pakistan, it is also set on the planet, in the world. I was trying to signal that the whole world is heading for the sort of chaos that Pakistan is trying to get out of.” That chaos bears many signs, from the recent election in the United States to the assassination of British politician Jo Cox just a few miles from Aslam’s home in an event echoing the Giffords shooting.

And, to judge by the headlines, it threatens to get much worse before it gets better.

If we must love one another or die, as W.H. Auden warned, then it appears we are all hurtling toward the grave. Nadeem Aslam’s gentle but urgent novel offers the hope, though, that we may find our better angels before that terrible eventuality. “Books are our instruction manuals, our survival manuals,” he says. “But ultimately the best of them are all love stories.” So it is with The Golden Legend, a love story that speaks to the chaos of our time—and how to survive it.